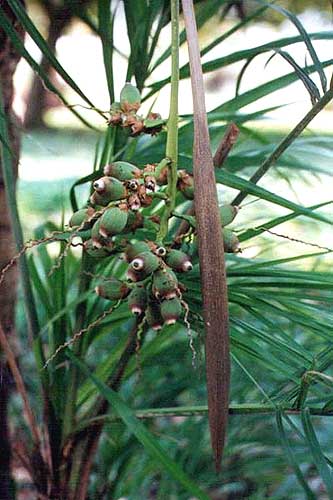 Is endemic of dry areas of Bolivia. In the base of the Andes to any altitude range in some inter Andean valleys. Two types are known depending on the size of the trunk and altitude where it grows. Grow usually in sandy soils, open areas, with Acrocomia sp., Attalea phalerata and the small Zamia boliviana.

This is a small Syagrus to about 2m tall, sometimes clustered, and with a smooth, 10cm diameter trunk. Long, arching green leaves. Very similar to Syagrus yunganensis and probably the same species.

Unknown palm in cultivation, except in some private palm collections; it is not cultivated near to its habitat. The species is endangered due to its habitat being destroyed for agricultural purposes. Leaves, flowers and fruits are eaten by cows. Although there aren't any reports about cold hardiness, it will probably take light freezes without trouble. It is called cardenasii for Martin Cardenas, a Bolivian biologist, who has done alot of work with the palms of Bolivia.

A sunny, sandy, well drained position, and kept on the dry side. Probably frost hardy. This was posted by Nigel to the [[www.palms.orgcgi-binikonikonboard.cgi" IPS Forums on Aug 17 2005 and deals with S. cardenasii germination. In the case of Syagrus cardenasii I almost lost every seed I germinated. Despite putting them in deep pots they sent down an extremely deep taproot and the new leaf emerged from the shoot at the BOTTOM of the pot leaving no room for any roots as they were air pruned as soon as they tried to form. It all looked completely normal from above, it wasn't until the seed energy was expended that they started to keel over. This palm has subteranean trunk ,which is the reson why , but I had no idea it would go so deep from the outset, therefore if you grow from seed use a very, very deep pot.