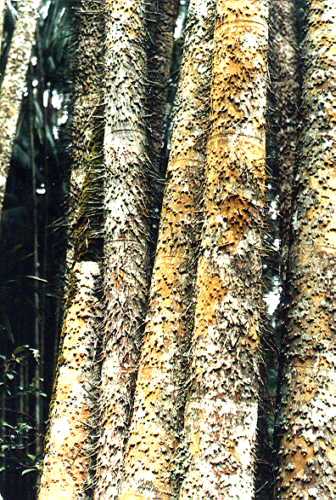 As a group of plants, the spiny palms can specifically be regarded as those palms which have true spines on either or both the trunk and leaves - which excludes leaf-bases, petioles, rhachis and leaflets - and for most cases having spines on the flowering parts - including bracts, spathes, seed stalks - and in a few cases even the fruits (Astrocaryum and Acrocomia species). They have no botanical standing as a related group, even though the spiny palms are restriced to only three sub-families within the Arecacea, namely the Oncosperma alliance of the Arecoids, the Bactris alliance of the Cocoids and the Calamus, Salacca, Eugeissona and Korthalsia alliances of the Lepidocaryoid Palms.

True spines, as opposed to the spikes, needles and teeth of the Fan Palms, have developed only on pinnate leaved palms. They are independent lignified epidermal outgrowths, some-what like a human hair or fingernail, composed of cells which differ from the surrounding tissue's cells in which they are embedded and from which they project. They can be isolated growths appearing at random, singularly or in patterns of circles or whorls, pointing upwards or downwards. At their first emergence, they contain moist vascular cells but as the spines reach their maximum length, they dry up and become hard and in many cases brittle. Their growth is basal as are all other parts of palms.

They take a few basic forms. The typical spine is circular in cross-section, straight, tapering to a very sharp point, varying in length from under one centimetre to over fifteen centimetres (Aiphanes). Some species of the Bactris alliance (Astrocaryum and Acrocomia in particular) have two sided blade-shaped spines on their trunks and flower spathes.

Many of the spiny climber's spines are united at the base to form a crest and in species of Plectocomia and Daemonorops in particular may be large enough to encircle the stem or petiole.

As an impliment of armament, the spines are potentially used as a protective device to ward off herbivores which may find the apical growths to their liking as well as to guard the ovules, pollen and seeds from the same or similar herbivores. The spines may also help in camouflaging insects which may be carrying out pollination for the palms - a symbiotic exchange for a safe home or breeding ground.

Oddly enough, there are no Fan Palms which have true spines on either the trunks or leaves. Their spines (or should they be referred to as spikes, needles or teeth?) are usually an appendage, mainly a leaflet, which has been reduced or transformed into a sharpened object, for example, the petiole spines (teeth) of Livistona or Washingtonia are more than likely leaflet's midveins which have either not developed or have been reduced sometime in their evolutionary past. In fact all the teeth, bumps and other projections on the edges of the petioles, leaf-bases and lamina edges of the Fan Palms bear some relationship to the formation or reduction of leaflets whether to be developed or reduced within their next evolutionary stage.

The other spines (?) of Fan Palms, those projecting from the trunk (Zombia) and from the leaf bases (Rhapidophyllum) are the remnants of the vascular fibres which once made up parts of the supporting structures of the leaf-bases. When the old leaves eventually fall, these skeletal structures remain behind still attached to the trunk.

The Fan Palms are a recent development in plant form. Very few of them have been immortalised in stone as fossils, being sparsely found in the Eocene deposits of 65 million years ago, whereas the Pinnate Palms history can be traced back to the Upper Cretaceous Period of 136 million years ago and possibly the Jurassic of 195 million years ago. We may presume therefore that the spiny palms are dramatic variants of the descendants of an ancient pinnate leafed form, having developed their spines as a response to the needs of survival, a response which has proven successful to their continued existence.

Of particular interest from an evolutionary standpoint, is that no spiny members of the Arecoids are found east of Wallaces' Line. In 1867, Alfred Russel Wallace, a co-author of the theory of evolution with Charles Darwin, proposed a line of demarcation, the theory of which was based on the now proven fact that the Malay Archipelago is divided into two distant biospheres of evolutionary action. There are some overlappings of genera, mainly the flora (consider Calamus of the Lepidocaryoids) but generally there is quite a distinct difference between the adjoining areas. The "Line" extends northward from east of Bali, between Borneo and Sulawesi, to east of the Philippines.

To confuse things a little, the Lepidocaryoids have some genera which straddle Wallaces' Line - these being Calamus Korthalsia and Daemonorops but most of the spiny Lepidocaryoid genera do not extend eastward of the "Line", these being Salacca, Eugeissona, Plectocomia, Plectocomiopsis, Ceratolobus, Myrialepis and Cornera, with the exception of Salacca and Eugeissona all being climbing palms.

The islands of the Malay Archipelago are the centre of the Arecoid Palm evolution in the Eastern Hemisphere. Stretching westward from the Philippines, through Indonesia and Malaysia, to Sri Lanka, the Seychelles, to terminate in Mauritius, is an imaginary path through which the palms have migrated westward from this centre. Other unique plant groups are also found on this westward directed path. For example, the Pandanus - they reach most prolific numbers in south-east Asia but there are outpost species in the Seychelles, the Mascarene Islands and one solitary species in Madagascar. Exactly the same can be said of the Nepenthes (Carnivorous Pitcher Plants) with approximately 70 species centred in Borneo (30 species) there is but a single species in Sri Lanka (Nepenthes distillatoria) the Seychelles (N. pervillei) and Madagascar (N. madagascariensis). Orchids of the Vandeae Tribe centred in the Malay Archipelago have outpost genera in Sri Lanka (Vanda and Rhyncostylis) the Seychells (Oeoniella) and Madagascar and adjacent islands (Aeranthes), but the ability of the orchids to adapt and diversify is much greater than Palms which has resulted in large numbers of species within each genus.

But to return to palms - the unique features displayed by the spiny palms of the Seychelles and Mauritius are a fantastic evolutionary jigsaw puzzle. We can only wonder how such diverse growths have evolved from what must have been a single species (?) similar to the modern Oncospermas becoming isolated by rising waters and having to settle down to compete with the other forms of flora for survival. It can be said that the Palms of the Seychelles are what turtles are the Galapagos Islands.

To find the evolutionary centre of the spiny Cocoid palms in the western Hemisphere is not as straightforward as in south-east Asia. There is one very large genus, Bactris with around 240 species, three smaller ones but still large by palm standards, Aiphanes with 38 species, Astrocaryum with 47 speices, Acrocomia with 26 species, one monotypic genus, Gastrococos which is very closely related to Acrocomia and Desmoncus the climbing palms, with 40 species. It would be suspected that they originated in a continental area, perhaps Costa Rica or Venezuela, and from there migrated to the numerous islands within the West Indies where they developed there specific characteristics and peculiarities.

Some Spiny Palms of the Bactris alliance:

Acrocomia: A genus of 26 species which is widely distributed from cen tral Mexico to northern Argentina, Paraguay and throughout the islands of the West Indies. They are tall, solitary palms with plumosely arranged leaflets, viciously spined on all parts, even the fruits of some species (A. emensis and A. hasleri, both formally Acanthococos).

Aiphanes: A genus of 38 species restricted to the islands of the West Indies and rainforests of northern South America. They are solitary palms with broad leaflets, spined on all parts except the fruits.

Astrocaryum: A genus of about 47 species distributed from Mexico through central America to eastern Brazil and the West Indies. They are clumping and solitary, with par ticularly vicious spines on all parts, even the fruits of some species (A. mexicanum).

Bactris: A genus of around 240 species distributed from Mexico through cen tral America to Surinane and in par ticular the islands of the West Indies. They are mainly clumping palms with spines on all parts except the fruits.

Gastrococos crispa: A monotypic genus restricted to Cuba. It has a swollen trunk with spines on all parts except the fruits.

Desmoncis: A large genus of 40 species confined to central and south America. They are climbing palms with spines on all parts except seeds.

Some Spiny Palms of the Arecoid alliance:

Acanthophoenix: A genus of two species, A. rubra being restricted to Mauritius and A. crinita (Note: now regarded as a synonym of rubra) to both the Mascarenes and Mauritius. They are elegant, tall solitary palms with spines only on the leafbases, petioles, leaflets and flowering parts.

Deckenia nobills: A monotypic genus from the Seychelles. It is a very tall palm to 35 metres with spines on all parts except the seeds.

Nephrosperma vanhoutteanum: A monotypic genus from the Seychelles. It is a tall palm with spines only on the leafbase, and petioles.

Phoenicophorum borsigianum: A monotypic genus from the Seychelles. It grows to 40 feet with entire leaves which become divided by the action of the wind. It has fine spines on the trunk, crownshaft, leaf bases and petioles.

Roscheria melanochaetes: A monotypic genus closely allied to Verschaffeltia from the Seychelles. It is a small aerial-rooted palm with unevenly divided leaves, having spines only on the trunk.

Tectiphiala ferox: A small palm from Mauritius, which must have the most specific habitat of any palm. It is found growing on a plateau with a clay based swamp, a very high annual rainfall (5000mm), growing in full sun. There are reported to be only 28 individuals growing in its known locality. It has bristly spines on all parts except the seeds. It is unknown in cultivation.

Verschaffeltia splendida: A monotypic genus from the Seychelles. It is a tall, stilt-rooted palm with entire leaves which occasionally split. It has spines on the trunk crownshaft and petioles.

Oncosperma: A genus of five species, four of which are confined to south east Asia and one (O. fasciculatum) to Sri Lanka. They are tall, drooping leaved palms, densely spined on all parts except the seeds. Except for O. horridum, they are clumping palms. The palms of the Lepidocaryoid alliance include

Salacca: A genus of about 14 species confined to the Malay Archipelago. They are trunkless clumping palms with vicious spines on the petioles and smaller spines on the leaflets. Fruits have bristly scales.

Eugeissona: A genus of seven species confined to the Malay Archipelago. They are trunkless clumping palms with spines on all parts except the seeds.