From Pacsoa
(Redirected from Rhapis varigated)
Jump to: navigation, search 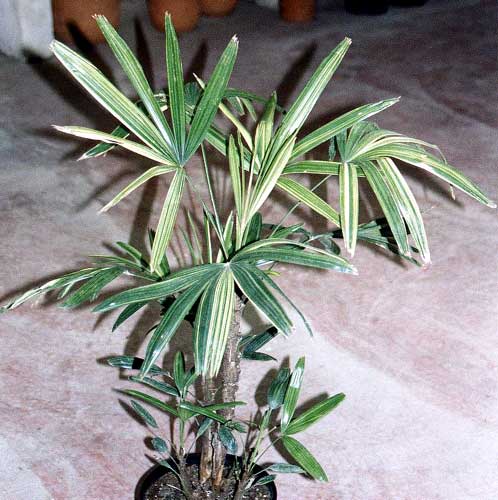 Introducing The Secret Of The Orient

Introduced to Japan, from China, in about 1600 AD, the western world has only recently discovered the exquisite miniature palms of Japan and the traditions which surround them. Truly a secret of the orient and, until now, "national treasures" which the Japanese have neither sought to export nor publicise to outsiders.

Collectively called Kannonchiku (Kan-non-chee-ku) they are, botanically, all Rhapis_excelsa, a species which is native to southern China. The name, Kannonchiku, is thought to derive from an Okinawan temple dedicated to the Buddhist goddess 'Kannon" and from 'Chiku", Japanese for bamboo, which the plants superficially resemble. Another species, Rhapis_humilis, or Shurochiku, is also highly regarded but does not enjoy the same prominence as does Kannonchiku.

Kannonchiku are small evergreen palms which never have branches, seldom grow higher than two metres when mature and have stems covered in a net-like fibrous bark. Characteristically, all Kannonchiku have "hand-like" leaves and it is the shape, density and colouring of these, combined with rare natural dwarfing, that forms the very basis of their attraction and reverence in Japan.

With over one hundred named varieties of Kannonchiku the naming and registration of them is the responsibility of the Japan Kansochiku Association, or Kanoskai, who, since 1947, has officially given each variety a name and placed them on a ranked classification register. About fifty varieties have striped (shimatu) or spotted (zufu) leaves and about fifty have all green (aoba) leaves. These are again divided into genealogical groups depending on their place of origin and are: "Native Group" or those introduced to Japan since the seventeenth century, "Rakanchiku' from southern China, "Taiwanchiku" from Taiwan since before World War 2 and "imported Group" from places other than China and Taiwan. These are all mapped in a "genealogical tree" so that their histories may be indexed.

All varieties of Kannonchiku are potentially very long lived plants and, with proper care, have been handed down from generation to generation of Japanese families as "living heirlooms" and since most varieties never grow large, these natural "bonsai" miniature palms form part of traditional Japanese culture and aesthetic values Much status may be attached to the possession of Kannonchiku varieties and could be compared to the western penchant for collecting rare coins, fine paintings or antiques.

Because Kannonchiku varieties are propagated by natural off-shoot suckers, and not by seed, the process of producing even small quantities of plants can take many years, as each plant may only produce three new off-shoots per year. To produce new varieties from seedlings the chances of a variegated form may be as little as 1 in 10,000 and hence the value of first class varieties can be extremely high. In 1975 a single choice off-set of the the new variety, Eizanniskiki (Prosperous Mountain Brocade), sold for US$10,000. In Japan, Kannonchiku varieties can sell for as little as $10 for un-acclaimed all-green varieties to as much as $6,000 for a "first class" registered variety if, or when, it becomes available for purchase. Of course there are outstanding new selections like Eizannishiki which fetch enormous prices and some, reportedly, have sold for as much as $25,000.

Kannonchiku are traditionally grown in hand made "Rakuyaki" ceramic pots which resemble an upside-down bowler hat having three legs. Highly decorated pots with gold legs are called Nishiki-style with the most expensive patterns and sizes ranging from $350 to $700. "Wave and bird" design pots are called Namanishiki-style and are valued at $200-$400 and a third pot type is Fuchikin-style black with gold rim and gold legs and may range from $100-$200. Another type is Katayaki, or inexpensive machine made pots, and are nowadays of high quality plain black plastic. All Rakuyaki pots have a large drainage hole which is covered by a removable ceramic mesh called "Sana". This is to give perfect drainage.

In Japan, Nishiki, Namanishiki and Fuchikin styles are craftsman made and are never mass produced. Thus no two pots are identical, making each pot an original and a collector's item. Some Nishiki-style are often personally signed by the craftsman in Japanese "Kanji" or picture script, in the same tradition as any work of art. Hence, collecting pots can also be a richly rewarding and profitable hobby. Collecting Kannonchiku varieties and displaying in their special pots can become an engrossing and valuable pastime. In Australia, at present, there are only a few of the many Japanese registered varieties. These are: Zuikonishiki (Auspicious Light Brocade) with pure white stripes along the leaf; Ayanishiki (Figured Brocade) with fine white stripes; Chiyodazuru (Chiyoda Crane) a well defined stripe pattern; Daruma (Dharma) with solid green broad leaves; and Koban (Gold Coin) with rounded solid green leaves. More varieties are being imported and, after quarantine in Australia, will be released in years to come. But so slow and exacting is this that they will never become mass produced, thus guaranteeing their continued high value.

Growing Kannonchiku is surprisingly simple as they are very hardy sub-tropical plants but will tolerate temperatures as low as 1 degree Celsius. They are well suited to indoor growing since Kannonchiku do not like direct sunlight and will happily grow under artificial lighting in homes and offices. Indeed their preference for lower light is a very good feature of Kannonchiku and is one reason why they have been so popular in Japan.