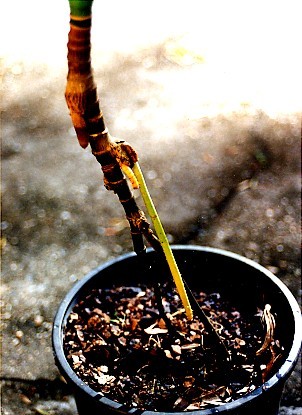 I have a small Socratea exorrhiza at home, which like most Socrateas that I've seen looks rather weedy in the root department. I have heard that this is due to our lack of humidity, i.e. the roots need very high humidity to grow through the air, down to the soil. I had my plant growing in an enclosed shade house, which I wet down every day in summer, but to no avail, no new roots appeared at all. So I decided to try something, which I had been thinking about for a while, and put a small plastic cup of water close to the plant and then wrapped the whole base of the plant in plastic. This kept the root area in constant high humidity, enhanced by occasional sprays with a water mister.

Then lo and behold, about 3 months after doing this I checked the roots, and there was a nice new healthy root about 4 inches long, making its way down to the soil, as well as three other smaller roots starting that long descent. I'm very impressed by this, and am trying the same trick on a similarly recalcitrant Verschaffeltia splendida, and an Areca guppyana, to see if I can duplicate the success. The Verschaffeltia is a bit of a problem; because of all the spines around the trunk, it's impossible to get a tight seal with the plastic, and thus keep the humidity as high as with the Socratea. If I have any further success with this method of root stimulation, I'll report back, and if anyone else has had similar success with encouraging roots, please let me know, I'd be most interested.