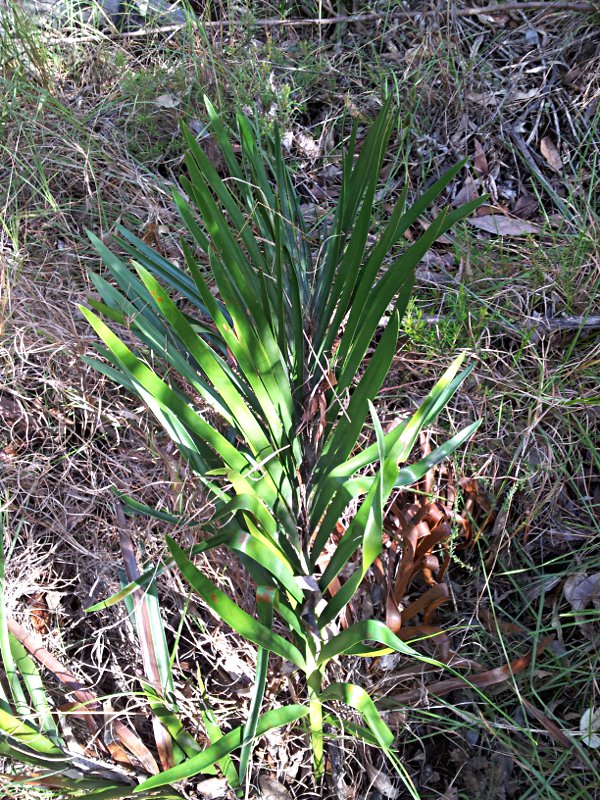 This interesting small cycad was first described from material collected from Planet Downs Station west of Rockhampton. It was discovered somewhat later than most others in the Parazamia group possibly because, as remarked by earlier writers, it seems no evidence existed that it was a serious danger to livestock so that there was not much to bring it to the notice of graziers. Even today it is not particularly well known to many people as it is not commonly cultivated and its habitat is rather remote.

My specimen has four leaves which rise erect from the crown and then curve over in a very pronounced fashion. The entire foliage has a shiny leathery appearance. Its growth structure is typical of the species though the largest in habitat have nine or ten leaves up to a metre in length. The middle pinnae on my plant are 37.5c m long and 15 to 20mm broad. The name "platyrachis" refers to the broad rachis but it may be said that the pinnae are also noticeably broader than any other parazamia. As far as I know not a great deal has been written to describe its habitat adequately but as a help in cultivation it is good to know something of its habitat and associated plants. 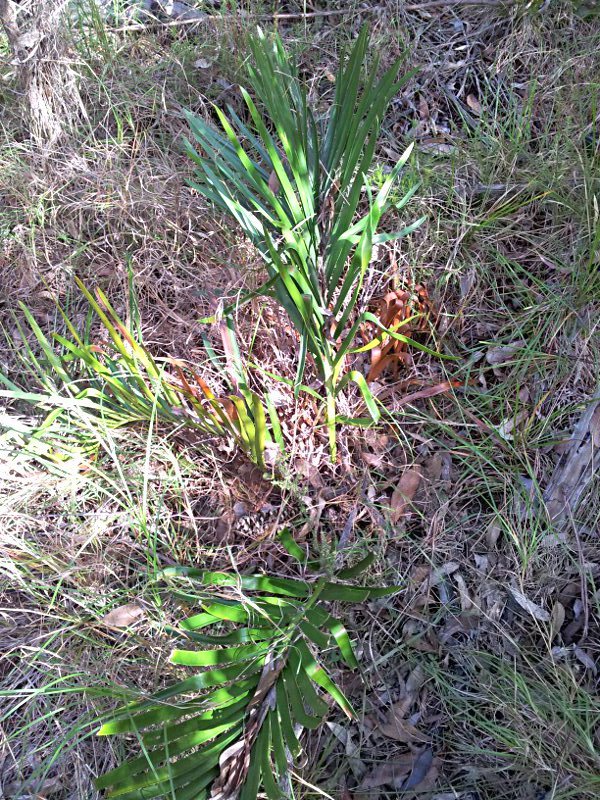 A beautiful colony of these plants was observed with a good recruitment of seedling in the area.

Macrozamia platyrachis is the most northerly known of the Section Parazamia with by far the largest colony to be found on the Blackdown Tablelands. It is a hilly area with steep escarpments and generally rises from 500 metres to nearly 1000 metres and is located west of Rockhampton and slightly south of the township of Dingo. The tableland is a likely future tourist area and was declared a national park in 1982. Most of it is open eucalypt country while on its eastern side the escarpments have a few lovely waterfalls and streams cascading to cool gorges, the best known being Rainbow Falls and Stony Creek Falls. The soils of the area are mostly deep sandy loam, well suited for eucalypts, two worth a mention being the Yellow Stringy Bark and the Blackdown Stringy Bark. The palm Livistona fulva, endemic to this locality, is predominant. To add colour to a very picturesque place there are acacias and Pultenea. In another section to the east, and down near the creeks, the Melaleuca linariifolia and a fine form of Banksia spinulosa hold sway. It is however on the western side of the plateau, among huge outcrops of sandstone boulders, that the best colonies of Macrozamia platyrachis are found growing among communities of the eucalypt known as Yellow Jacket and Grevillea longistylis. On the sandstone boulders, the lovely Silver Elkhorn Platycerium veitchii, and the Rock Fern Drynaria rigidula can be found. The drive into the national park includes quite a distance of rough unsealed road and this, together with the national park status and not being really accessible to stock, all help in the conservation of the species. Growing mature plants from seed takes a long time, so enthusiasts wanting larger plants have generally been able to obtain plants legitimately from the owners of farms bordering the plateau. (Editors Note: "Some time ago I was given some plants of this species. They were generally in a very poor condition and some had already died while most had diseased or dead roots. They were in a sawdust based potting mix with very poor air-filled porosity so I cleaned them up and repotted them in a mix consisting mainly of pinebark. This mix has given good results with many cycads but it was not entirely satisfactory for Macrozamia platyrachis. After a year or so and the loss of a few more plants I repotted them again into a mix composed mainly of perlite and a small proportion of coir peat. They have now begun to recover and good roots are visible through the drain holes of the containers in which they are growing. It seems that perfect drainage and a good supply of air to the roots is of utmost importance in the cultivation of this species" . - Will Kraa.)