If the new leaves on your cycad are rapidly turning yellow and the edges going a whitish-straw colour, then you probably have an infestation of a nasty little pest called the cycad blue butterfly (Theclinesthes onycha). You will often notice numerous blue-grey butterflies hovering around your cycad; they lay their eggs on the new growth, (the mature leaves are too tough) and then after 2 or 3 days, the larvae will hatch out and immediately start eating. Any damage to the young leaves at this stage will be magnified later when they mature and will cause a very ragged and untidy appearance. 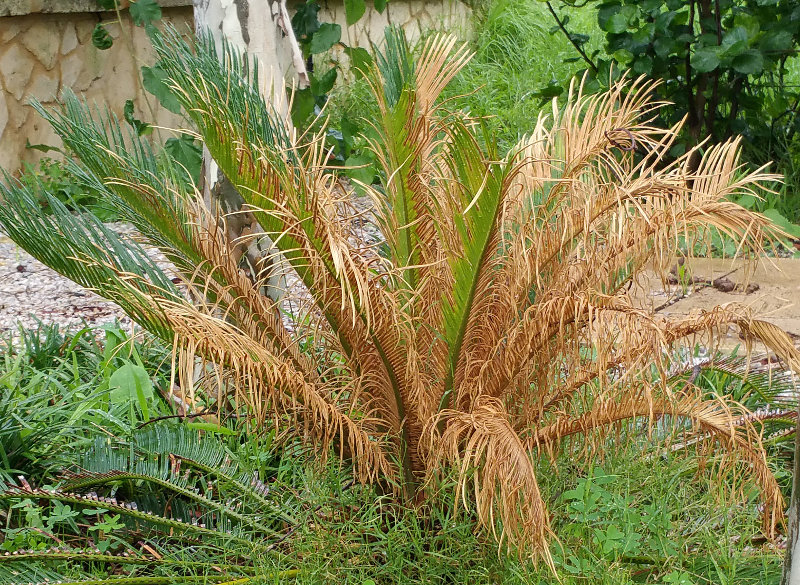 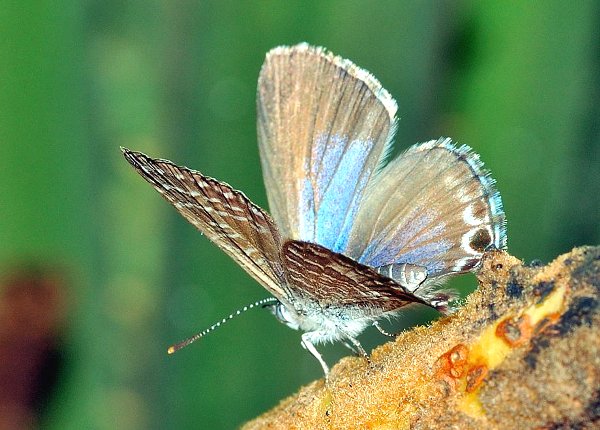 These butterflies have pale brown wings, with a metallic blue or purple sheen, and a wingspan of 25-30mm. They have eye patterns of orange and black on the margin of hindwings, and each has a little tail attached.

They lay pale white-blue, disk shaped eggs on the young, soft leaves. The caterpillars are green when they hatch, but become dark brown/deep burgundy as they grow older. They hide under the leaves and in the crown, and feed at night.

Its habitat is open forest, in eastern coastal areas of Australia from Cape York in Queensland to southern New South Wales. It is the only Australian butterfly caterpillar that feeds on cycads. It has obviously been around for a long time, but it is only in recent years that it has become a pest. 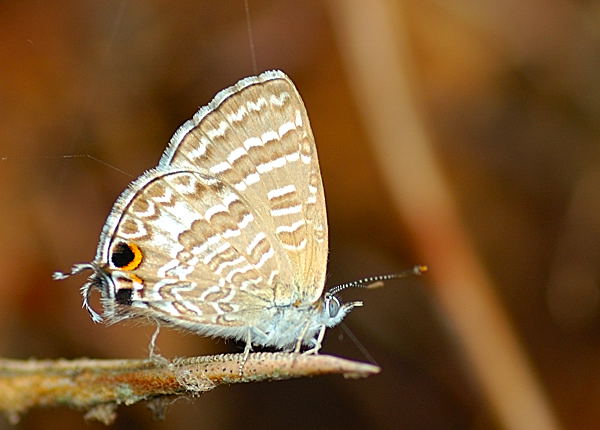 It mainly attacks Cycas (all species) and occasionally Lepidozamia, however it doesn't seem to touch Bowenia, Encephalartos, Zamias or Ceratozamias. There are reports of it attacking Dioon edule, but not any other Dioons.

If there are a lot of butterflies around, it is likely they will attack anything they can lay their eggs on.

At Talegalla weir in QLD Macrozamia pauli-guilielmi occurs naturally. Both wild and propagated plants are attacked. (from Scott Gavins)

There are other reports of Macrozamias being attacked as well, although not every year apparently. 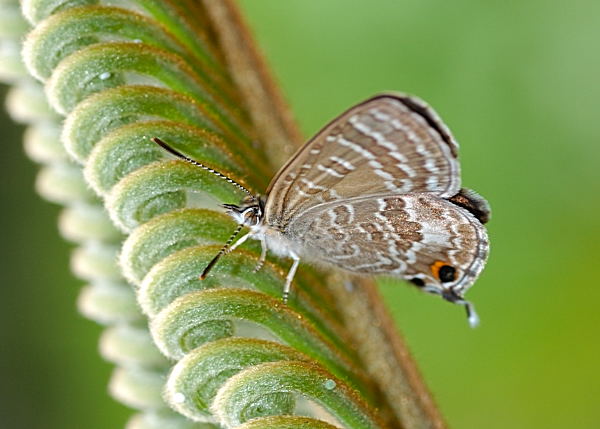 Hose away the wool in the crown before the new leaves emerge. Make up an insecticide, (e.g. Crown, Bugmaster, Rogor, Supracide, Dipel but not a pyrethrum based one), and add a wetting agent (e.g. a few drops of dish washing liquid), to get it to adhere to the leaves. I also add some seaweed to the spray, to feed the plant. Spray the emerging leaves (both sides) and the crown weekly from just before the new leaves emerge and also after rain, and continue spraying until the leaves harden off.
(from Peter Heibloem)

A good spray for them has the active ingredient of Bifenthrin and is available under several different brand names, and you need to add wetting agent to the spray so that it sticks to the leaves and doesn't just run straight off. A quick and simple remedy is Mortein surface spray once a week in the cool part of the day.
(from Will Kraa)

Eco-friendly commercial sprays include Dipel, and Yates Success. These are natural products derived from diseases of caterpillars – that is, they aren't poisonous to people, birds and animals in general. Eco-Neem has also been recommended as an effective environmentally friendly spray.

Another commonly mentioned cure is vinegar. Make up a mixture of a cup of vinegar, in 1.5 litres of water and spray that onto the leaves. However a bit of research on the web suggests that this remedy is of limited effectiveness. On the plus side it is cheap and easy, and also non toxic to most other things, so its probably worth a try initially if you don't have many plants.

Another cure that I've heard of is to put used coffee grounds in the crown of the plant. As the new leaves come thru them they pick up some of the chemicals which the butterfly apparently doesn't like. This only protects the leaves until they are @ 30cm/1ft long, after which you have to spray them with a weak solution made from the coffee grounds every week or 2 until they harden off. I haven't tried this myself, but have been reliably informed that it works.

The important thing to remember is to spray every week or 2, from when the new growth appears to when the leaves harden off, and turn dark green, and also repeat the sprays after rain, as the sprays will wash off. Ideally, start spraying the plants a week or so before the leaves start growing (usually early spring). Spray and thoroughly wet inside the unopened crown of the plant to insure that the next flush of growth gets a good start and to kill any larvae hiding there, burrowing into the top of the plant.