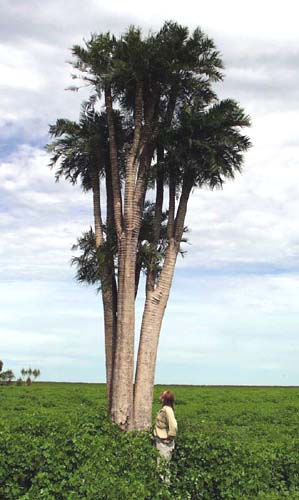 Cycas comes from the Greek Koikas, apparently used by [Theophratus] (a Greek philosopher often considered the "father of botany") for a type of palm. This was transliterated to 'kykas and thence to Cycas.

The single genus in the family Cycadaceae, Cycas is made up of about 90 species, chiefly Australian (26 species) and Indo-chinese (about 30 species). The genus also occurs in the Malesian region, Japan and South east Asia, extending to Micronesia and Polynesia, Madagascar and East Africa. Four sections are recognised. The Australian species are generally more sun and drought tolerant, although they often require tropical temperatures to grow well, while the Asian species are more shade and moisture loving, and with a few exceptions, can be quite cold sensitive.

Plants are commonly under-storey shrubs, sometimes quite large, on well-drained soils in forest, woodland or savannah habitats, often on specific soils or substrates. They typically have numerous long, thin, closely spaced, leaflets each with a prominent central vein, and lack any obvious secondary veins, although there are a couple of species with bi-pinnate leaves. Also the megasporophylls (seeds) are not gathered in cones as in the other genera of cycads, but form a "skirt" around the top of the trunk.

Cycas are regarded as the most primitive cycad genus, evolving during the lower Permian era (@280 million years ago) in China.