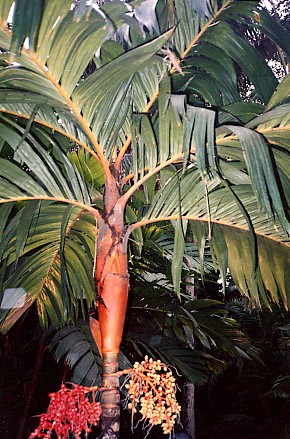 Areca vestiaria, a clustering, shade-loving ornamental palm is native to North Sulawesi, the northernmost province of Sulawesi Island (formerly known as Celebes). This palm also grows in the neighbouring Maluku Province especially in the northern islands` In these regions, the palm is known as 'pinang merah', or the red pinang. For the Indonesians, 'pinang merah' is the common name for all palms resembling Areca or Pinanga and whose crown-shaft, petiole or fruits appear red, pink orange or golden yellow. Even Cyrtostachys lakka, the sealing-wax palm, is 'pinang merah' for them. By whatever name Areca vestiaria was known until recently, this wild palm is one of the most beautiful ornamental pinnate palms, comparable only to the sealing-wax palm in beauty. Dr John Dransfield, an Editor of Principes, (the Journal of International Palm Society), established that Areca langloisiana, described by late Dr Harold E. Moore Jr. (Founding-Editor of Principes), and Areca vestiaria are synonyms. This red pinanga was known earlier by various names such as Areca langloisiana, A. leptopeltate,A. heinrici, A. paniculata, Ptychosperma paniculatum, P. vestiarius, Mischophloeus paniculatus, Pinanga sylvestris and Seaforthia vestiaria.

The wide morphological variation noticed in the palm which ranges from the profusely stilt-rooted condition to having no aerial root at all, densely clustering to single-stemmed habit, colour of leaf-sheath ranging from red, bright orange, light orange and brown, and the variation in the colour of fruits which changes as the fruit matures, all contributed to the confusion of its name. Further, the bright orange colour of crownshaft, spathe and mature fruits become less attractive at lower altitudes. Thus, the palm appeared differently for palmists who saw them in small numbers at only a single location. We had the opportunity to admire Areca vestiara in its indigenous habitat in the many volcanic mountains of North Sulawesi, especially in Gunung Soputan and around Lake Tondano. Also we could examine clumps at lower elevations where it looked less colourful. There is confusion even in the local name of the species. Although 'pinang merah' (red pinang) is a more common name, it is also known as 'pinang yaki' (monkey pinang). Perhaps monkeys, especially the Sulawesi crested macaque, enjoys the ripe fruits of pinang merah because of its sweet mesocarp and this could have earned its popular name. 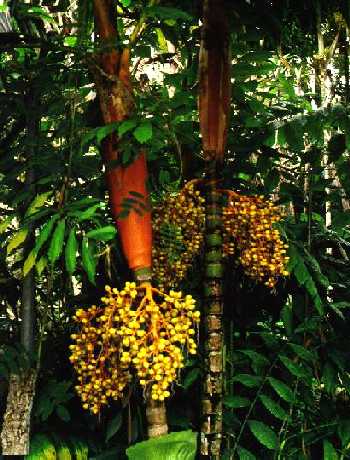 Figure 2. Areca vestiaria, the bright red prophyll and crownshaft make a striking contrast against the dark green leaves. The fruits and inflorescence rachillae take on an equally intense colouration at maturity, a situation which changes according to the altitude at which the palm grows - the higher the altitude, the more intense the colour. (T.A. Davis)

Ripe fruits, spathes and crownshaft of Areca vestiaria growing at altitudes between 600 and 1200m are very colourful. At lower elevations, as one can see in front of homes along the mountain slopes and valleys, as well as the clumps maintained at the Bogor Botanic Garden, the colour is less spectacular. In the colour picture that appears on page 159 of the book Palms in Australia by David Jones, the leaf sheath of 'pinang merah' appears almost green. So also the stilt roots do not appear colourful. The stem is slender, tall and smooth displaying distinctive rings of leaf-scars. Depending on the richness of the locality where they grow, the number of shoots per clump varies from one to twenty or even more. Very young shoots are less impressive. The crownshaft/leafsheath is deep orange and attracts the attention of people standing even at a far distance. Because of this, locating clumps of 'pinang merah' in valleys and slopes of volcanic hills is very easy even though proper roads or trails to reach them in such hills are extremely inadequate. As the mature leaf sheds and its auxiliary inflorescence becomes visible, the large spathe which envelopes the spadix is deep in its reddish orange hue. But as the spathe opens, the tender peduncle, spikes and flowers all appear cream-coloured. However, after fertilization, the female flowers, including their perianth cap, first turn light green and as they grow, turn dirty brown. As the fruits mature and ripen, their colour changes to light brown, light orange, deep orange and crimson red. Simultaneously, the colour of the peduncle and spikes also changes in unison with that of the fruits. A ripe infructescence bearing 25-300 fruits is extremely pretty, much more attractive than the fruit bunches of Cyrtostachys lakka. However, in C. lakka, the crownshaft including the rachis up to the tip of the pinnate leaf is deeply crimson, and more impressive than those of Areca vestiaria.

Several species of palms that inhabit swampy environments produce roots from the aerial portions of stem. In most cases, the roots grown slantingly on all sides of the stem and offer anchorage to the stem which is usually very thin to begin with. Without these stilt-roots, the thicker and heavier subsequent stem and the crown would cause the plant to topple down. Iriartea sp. of South America and the spectacular Eugeissona minor are good examples for palms of swampy habitats bearing impressive stilt-roots, however Areca vestiaria is not a swamp-loving palm. On the contrary, it lives on well-drained volcanic soils. While the sloppy nature of the soil calls for extra support for the palm stem on the lower side, there is another reason why A. vestiaria develops stilt-roots. The fruits are fairly small and they are either shed under the mother palms or more often they are carried to adjoining localities by fruit-eating animals. The seeds discarded by the animals after consuming the sweet pulp, get entangled within the thick forest vegetation and debris on the soil surface. The seeds start germinating immediately as there is no dormancy period. The seedlings are required to grow very fast to get out of the layer of fallen leaves and twigs. Thus the plant elongates vertically faster rather than developing a stout bole. As it emerges above the thick layer of organic matter, the subsequent stem steadily increases in girth. As if to support the thin stem, many aerial roots are produced from the tender stem which serve as props. The freshly-formed stem continues to increase in girth while the lower portion of stem remains more or less at the original thickness. Thus, there is vital need for several supporting stilt-roots which are formed subsequently. In this respect, A. vestiaria resembles another ornamental palm, Pigafetta filaris, also native to Sulawesi Island. The picture of A. vestiara (A. langloisiana) by E.P. Beckwith appearing on page 95 (volume 6 of Principes) is most impressive on account of its multitude of stilt-roots that virtually cover the stem up to over 2m from ground level. Young aerial roots and the tip of older ones are strikingly purplish-red. This is similar to the colour of young roots of Metroxylon sagu. 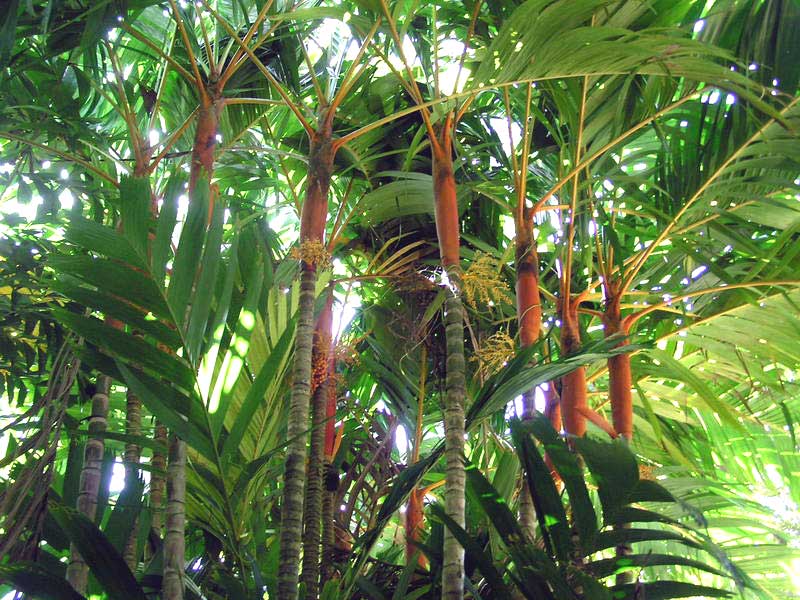 Figure 3. A spectacular plant of A. vestiaria.

The flower bunches of 'pinang merah' always remain below the leafy crown (intrafoliar), as they emerge only when the subtending leaf sheds. The single, large, boat-shaped and orange-coloured spathe splits open to let out the cream-coloured spadix bearing a short peduncle and 10-25 simply-branched spikes Areca vestiaria is monoecious, since the male and female flowers are produced in the same spadix. Female flowers are larger than the males, but smaller in number. Unlike in the common Areca catechu where the female flowers, 1-3, are placed at the base of each spike, in 'pinang merah' the female flowers are distributed practically throughout the length of the spike, intermingled with male flowers Blooming phase of male flowers commences from the time they emerge from the spathe, and the male flowers continue to bloom and shed for about 15 days, only after which, the female flowers attain receptivity. This alternation of male and female blooming phases favours cross pollination to take place. Male flowers have 3 extremely small imbricating sepals and 3 larger valvate petals. There are 6 functional stamens and 3 pistillodes at the centre. Female flowers have 3 imbricating sepals and 3 petals almost of the same size. The perianths fully cover the ovary until receptive stage. There is a ring of staminodes present between the whorl of petals and the ovary which represents the sterile stamens. The ovary consists of three united carpels and the style is very short or absent, but the trifid stigma is conspicuous. The fruit develops into a one seeded berry whose epicarp and perianth are bright red which enhances the value of this wild palm as an ornamental.

Although fairly slow growing, Areca vestiaria is easy to grow and the 11 year old specimen in Figure 2 has survived temperature as low as 5°C and has been seeding for the last five years. Usually suckering, but also solitary, and has small stilt roots. The species prefers damp soil of pH 6.5 to 6.8, warmth, high humidity and light shade The species is native to Borneo and is monoecious (i.e. male and female flowers are separate on the same plant.) This ornamental palm can be propagated either through fruits or suckers. The viability of fruit is short.