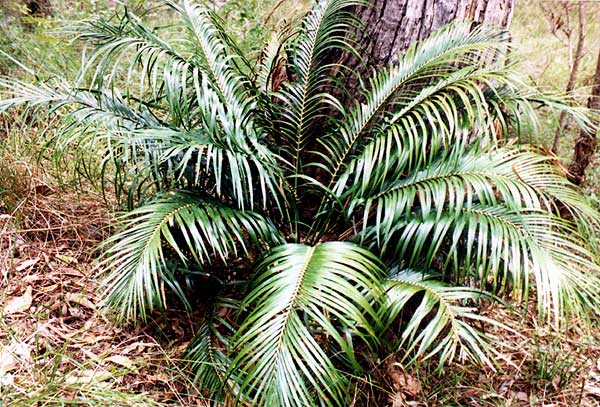 Placed in section Parazamia, Macrozamia lucida is certainly one of the 'thicket' species observed by Profesor Chamberlain early in this century. Queensland botanists have often applied the name M. spiralis to this plant, but of all the times this misnomer has been used it does not fit M. lucida as there is very little twist in the rachis of the mature frond. Known by local farmers as the 'pineapple Zamia', there seems to be only brief reference to its toxicity to cattle. The general locality I have found it growing in would be inaccessible to stock save only the most hungry and adventurous.

Macrozamia lucida has a subterranean caudex with leaves loosely arranged in a whorl in the crown. The pinnae are narrow, shiny dark green and their base clearly marked with prominent whitish glands. Length of leaves that I have observed would be 90cm on the average at maturity. Width of plant from tip to tip would be approximately one and a half to two metres. Height of plant would be about 1.5m. As many as five to eight cones have been seen on male plants whilst two cones generally on the female. The female cones are very attractive, comparable to other Macrozamia, being about the diameter of a closed fist and about 20cm long. Seeds are about three centimetres in length, dark orange when mature.

The petiole of each leaf is smooth. Spines terminate the sporophylls on cones of the female plant which has about 60 seeds. Sightings of Macrozamla lucida have occurred from Hervey Bay west to Carnarvon Gorge, then southward in the low ranges to the New South Wales border including around Brisbane. A prominent New South Wales botanist states that hybrids exist between M. lucida and M. moorei, so it is evident that it will cross readily with other species of the genus. Seedlings are easily obtained as the seed is viable if collected fresh. This plant adapts well to cultivation and soon blends into the harmony of a garden whether kept as a pot plant on a patio or as part of a native plant rockery, a position for which it is well suited. 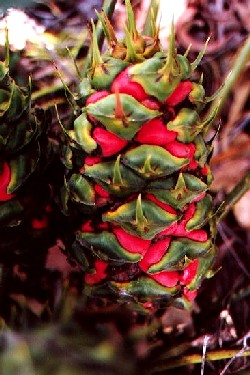 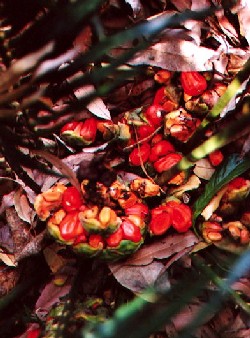