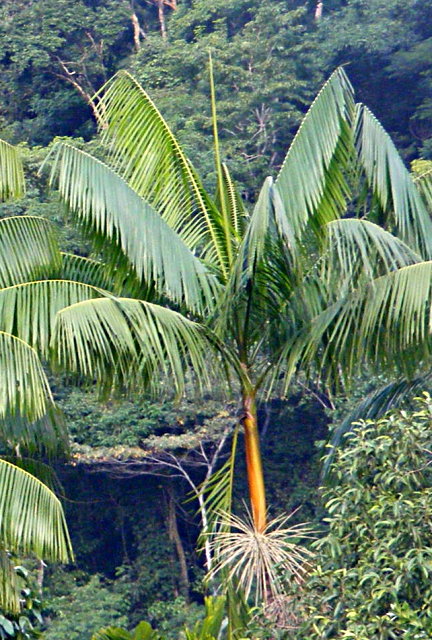 One of the most impressive looking palm species I've seen in Rio de Janeiro was the solitary "palmito vermelho" from the mountainous habitat in the Southeast Atlantic forest.

Some authors still consider this species as a variety of Euterpe edulis with less number of fronds (9 to 14) and with a distinctive orangeish 1 meter long crownshaft. This species is endemic to a small habitat area, in Esp"rito Santo State, between 700 and 1000 m altitude and it tolerates (and prefers) cooler winters. Authors in Brazil (Fernandes, Lorenzi) now consider it as a separate species.

I've tried to acclimatize these palms up here in the Northeast but they are slow growing seedlings in my warm sea level location so far. One of my friends in Amazonia reported that they are growing fine for him now so I'm optimistic that they can manage to survive and develop in warmer regions too. I've heard they are growing fine in Florida too and I wonder if they perform well in Hawaii or SoCal. The sprouts and first leafers look much darker than E. edulis from the beginning. I hope they'll get faster growing once past the early stages. I just can't wait to see this divine look around here in the future, too. Seen from the distance, they seem to hover above the canopy...