The Palms of Hawaii I

The Palms of Hawaii I

Figure 1. Map of the Hawaiian Archipelago, courtesy of

Hawaii is synonymous with beaches, trade winds, and palm trees although Polynesian introduced coconut palms (Cocos nucifera) are what you will most likely see. As visitors and residents enjoy this archipelago, few realize that there are hidden treasures unique to Hawaii. Hawaii is the most isolated landmass in the world. Consequently it evolved a biota high in endemic species. In fact, Hawaii has one of the highest levels of endemism in the world. The flip side to the coin is this delicate ecosystem has not withstood the impacts of introduced animals and plants, and shares the tragedy of a high rate of extinction as well. The native palms, Pritchardia or loulu palms are unique to Hawaii and the majority rank from vulnerable to critically endangered (Chapin et al. 2004a).

The genus is named in honor of William T. Pritchard, 19th century British consul in the Fiji Islands (Read & Hodel 1990). The subfamily is Coryphoideae, the tribe, Corypheae and the subtribe, Livistoninae (Uhl & Dransfield 1999). Livistona and Colpothrinax are the phylogenetic neighbors of Pritchardia. There are twenty-eight species that are restricted to the Pacific archipelagos of Hawaii, Fiji (P. thurstonii F.Muell. & Drude), Tonga (P. pacifica Seem. & H.Wendl), the Cook Islands (P. mitiaroana J.Dransfield & Y.Ehrhart) and the Tuamotus (P. vuylstekeana Hort.). Of the five Pacific species, P. maideniana Becc. is only known from cultivation. Hawaii has 23 single island endemic Pritchardia, including one that is currently being described. It is believed that either P. thurstonii or P. pacifica are the ancestor to these rare Hawaiian palms (Wagner et al. 1990). How the ancestor arrived in Hawaii is still a mystery but it has been speculated that a bird could have carried the seeds from the Pacific to Hawaii, or the seeds may have "rafted" atop pacific island coastal trees that broke away from the shore and were carried in the ocean currents to Hawaii.

Fossil evidence consistently shows that prior to human arrival to the volcanic islands of Hawaii, most likely Pritchardia dominated the lowlands and interiors of the islands or it was at least a major forest component. Archeological digs have found not only Pritchardia pollen, but also macrofossils of fruits, fossilized stems and roots; lava casts of Pritchardia and calcified stems of loulu palms (Burney et al. 2001; Carlquist 1980; Ehrlich 1988). These are important finds because they indicate specific localities and numbers while pollen alone is less specific because large amounts of pollen can be produced by a single tree and it can be blown far distances. In addition to palm forests, there were about twice as many endemic birds in Hawaii (now extinct), many of which were flightless, and some were quite large (Olson & James 1982, 1991; Olson 1989; James & Olson 1991). The palms most likely provided bird habitats and their abundance presumably increased the nitrogen levels in the soil. Understory ferns flourished among the loulus. Looking at the island of Nihoa, where P. remota thrives with 600 to 700 trees and regenerates in the wild, or Huelo Islet off of Molokai, where P. hillebrandii also grows as a healthy palm forest (Chapin et al. 2001), we can get a glimpse into pre-contact times to imagine how these extraordinary palms used to grace the wild landscape (see Figure 1). (Photo: Sheila Conant). 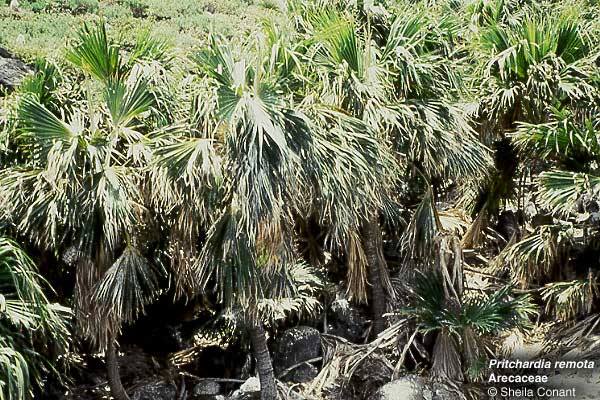 Figure 2. Pritchardia remota in the intact dryland habitat of Nihoa.

The finely balanced ecosystem of Hawaii was disturbed with the arrival of rats, goats, deer, and pigs that occupied many of the vessels that came ashore. Since the only native mammals are the insectivorous Hawaiian Hoary Bat (Lasiurus cinereus semotus) and the monk seal (Monachus schauinslandi), the palms suffered from rat seed predation, seedling grazing, and habitat destruction from the wild pigs (Carlquist 1980; Cuddihy & Stone 1990; Staples & Cowie 2001). Regeneration against these forces was a struggle and today what may have been extensive forests have diminished to fragmented, mid-elevation pockets of remnant Pritchardia, often hanging on by their fingernails, so to speak, in less hospitable habitats than they once occupied but perhaps safer from the ravages of the threats that assail them (Chapin et al. 2004b). This may explain why it may be necessary to take a helicopter ride or rappel from a rope off of a steep shear cliff to see a wild population of Hawaiian Pritchardia.