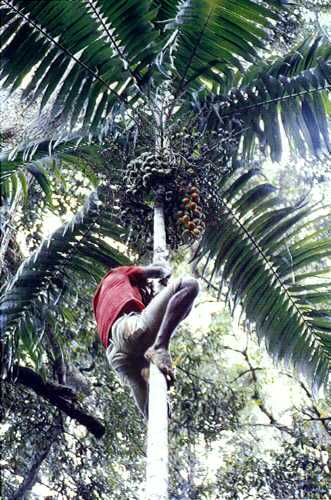 Ptychococcus lepidotus grows only in the Highlands ofNew Guinea from an altitude range of 1000 metres up to 3000metres! I have seen it growing in Eastern Highlands Provincein Papua New Guinea right across the other Highland Provincesto the western most one, Enga Province. I believe it to occuralso in Irian Jaya at corresponding altitudes and afterspeaking to travellers who have toured the Baliem Valley itseems the native people definitely have a palm likeP. lepidotus in cultivation.It must have a broad range of distribution and in some areas,at lower elevations may overlap with P. paradoxus,based on personal observations in Morobe Province in P.N.G.I would not say P. lepidotus is abundant in any onearea that I've seen, and it is difficult to say whether ornot people have been the major cause for its pattern ofdistribution, but I certainly suspect it so. Only once have Iseen it in natural stands of primary forest in EasternHighlands Province, adjacent to a major highway- the chancesof this population staying intact would not be great.For the most part P. lepidotus has a long history ofcultivation and one will often see it in people's gardens orwithin their village limits. In Western Highlands Province,P.N.G. I've noticed nowadays more and more are planted in'pies matmat' (cemetaries) and at historic/monument sites,but I don't fully understand the significance of this.My first encounter with P. lepidotus was at a villagein Mt. Hagen in January 1993, the home of one of my mostgracious wantoks, in Papua New Guinea. In his language(Melpa) it is known as Buna and to this day I refer to it thesame, (the botanic name is too awkward to use in pidginconversation).It has played a very important part, historically, in thelives of these Highland people, and the same can be said forother peoples right across the New Guinea Highlands, forP. lepidotus has a universal use, it is the primarysource for bows and spear heads. These were essential toolsas far as hunting game and fighting wars was concerned and noself-respecting young man would be without them. These daysof course it is much more different, and sadly many young menhave lost the skills of their forebears, and do not know howto craft a bow! Whilst it may sound simple enough to do, fromwhat I've seen it is definitely a skill that one must master,consequently there are only one or two 'bikman' (elders) inany one village that still continue this tradition. In thepast they would instruct young men, who in their passage tomanhood, had to learn this skill to ensure their own survivaland acceptance as a warrior. In those days it was consideredan important event and great honour was bestowed on thosewarriors who fought in tribal wars. The entire system of landownership in the Highlands has evolved from tribal wars andthe resuiting dividing up of the 'spoils of war'. In recentyears many disputes as to clan property boundaries still stemfrom grievances dating back to these times and as thepopulation of Highlands people is rapidly increasing, theavailability of land is correspondingly decreasing. Only themost foolhardy of persons would throw away their 'bunara'(bow) you can bet most people still have theirs tucked awayfor safe keeping - just in case !

In from the cold?

A promising palm from the New Guinea highlands. 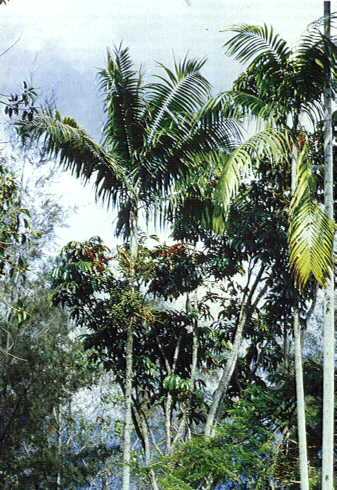 Figure 2. A group of Ptychococcus lepidotus cultivated for the trunks for timber, bows and spears at Mini, Western Highlands Province P.N.G. Ptychococcus lepidotus was only formally described in 1965 by one of the foremost students of palm taxonomy in recent history, Harold E Moore Jr. He had collected material in an earlier expedition to Eastern Papua New Guinea in 1964. Then, as now, he had scant Ptychococcus specimens to refer to from the major Herbaria, but he recognised it as separate, after having checked through the list of described species. The specific epithet 'lepidotus' refers to the prominent brown scales that coat both the male and female flower petals, a trait which he believed particular to the species. Rest assured though, there are a lot of other features that can easily distinguish it with the other species like P. paradoxus or P. elatus (which is a synonym) in common cultivation. The fruits of P. lepidotus are ovoid, 3-5 cms long and 3cms in diameter, when ripe the skin is a bright orange, and the succulent/fibrous yellow mesocarp exudes a strong spicy/musty odour, which I think is a particular character of this species. The endocarp is ornate, winged and lignified and tapers to a point. It is a unique palm seed form only known in Ptychococcus spp. from New Guinea and Solomon Islands. The surface of the endocarp is quite smooth, tawny/tan in colour with many strong black fibres that adhere to and are embedded throughout it. The wall of the endocarp appears very thick and woody, deeply intruding and folding into the endosperm, this aspect can be really appreciated when seeing the seed in cross section. There are 7-8 raised edges or 'wings', one of which is prominent and can be likened to a keel. They are however not clearly distinguishable from a glance because of the shallow grooves between them. Compare this to P. paradoxus with an endocarp surface that is dark chocolate in colour, and as many black fibres adhering tO it, but importantly the 5-6 edges of the endocarp are very sharp and they are divided by deep grooves, giving a much more defined shape. Usually the wall of the endocarp is not thick and does not intrude or fold into the endosperm to the degree of the former species. The seed of Ptychococcus lepidotus has a 'winged' shape that matches the endocarp, the endosperm is ruminate. All of these seed features are particularly useful to know, as I have seen many instances where P. paradoxus seed is regularly passed off as P. lepidotus, by unscrupulous merchants. Fresh seed only takes a few weeks to germinate. Fruits are born on infrafoliar (below the crownshaft) infiorescences branched to 3 orders. There are usually 5-6 or more inflorescences in varying stages of development, i.e. flowering and fruiting on any one mature palm! So there is never a real shortage of seeds at any time during the year. The first leaf (eophyll) is bifid, with jagged apices. The leaf surface is shiny, almost polished dark green, quite unlike the matt green of P. paradoxus. A white/cream line surrounds the mid rib and is prominent on seedling leaves, later the colour fades once mature leaves are produced. 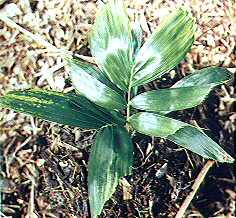 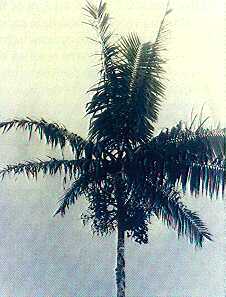 Figure 3. Seedling Figure 4. General habit of P. lepidotus crown (cultivated) in situ, Mt Hagen, Westyern Highlands Province, P.N.G. The palms appearance is of a standard form, the stem base is approximately 30 cm diameter, usually smaller, the trunk is smooth without prominent leaf base scars (cicatrices). The outer layer of the stem is very hard, and there are strong black fibres tightly immeshed within. The core of the stem base also is profoundly layered with coarse wiry black fibres, making it an exceptionally durable palm and hence is much utilised by native New Guineans. Usually the stem of the palm is cut 2 to 3 metres above the base, the outer layer of stem is then hewn off the core and is then cut into 2 metre strips which are then painstakingly carved to make bows, other off-cuts are used for arrow heads. The stems may reach up to 10 metres. This palm generally grows in an exposed situation, and is obviously tolerant to cultivation. It grows best in free draining soil and seedlings will establish in full sun. The crown of the palm is profuse with fronds, usually numbering 12 or more. They are held in an erect plane, although the rachis twists the fronds in a peculiar fashion such that they appear dishevelled! The pinnae are 50-65 cms long, and 2-4 cms wide, they are arranged in alternate order along the rachis. They have praemorse tips, as if tom or bitten off and are a dark glossy green with coriaceous texture. The fronds are about 2.5- 3 metres long and are not retained by the palm. There are concentrations of thick brown scales that cover the leaf base, petiole and rachis. This is a distinctive character and useful when observing it in the field. P. paradoxus by comparison, lacks this kind of indument. Frequently large tussocks of moss cling to the palm's stem and crown at higher altitudes, providing an ideal perch for orchids, which only are noticeable when in flower. Here at Flecker Botanic Gardens in Cairns we cultivate both species and P. lepidotus seedlings are not robust in our climate as our coastal conditions are not to the palm's liking. However if you are from the southem parts of Australia the story from here gets much better. I have seen specimens in cultivation in private collections in Brisbane and in Mt. Coot-tha Botanic Gardens and they are fantastic. The subtropical climate, I feel, is perfect for them, and I would guess that temperate climates further south would still be able to accommodate them, however frosty to freezing conditions could be fatal. I am not aware of any large specimens growing in Sydney, and would like to find out. In the Highlands of New Guinea, night temperatures regularly fall to 10 degrees during the dry season, and consistently throughout the rest of the year there is always a distinct drop in temperature from the daytime to night-time. This palm species has adapted to live with such vicissitudes of temperature thus from a horticultural perspective I would say there is a good chance this species will thrive in all zones where subtropical palms are cultivated. I have reports that this species is doing very well in places like Israel and in North America, at the seedling stage (C. York - pers. comm.). Beyond this I cannot predict how well it may grow outdoors. Sufficient interest has been shown around the globe to trial Ptychococcus lepidotus, and in years to come we all will know a lot more as to its horticultural requirements. I see it as a realistic alternative to the much publicised Foxtail Palm, Wodyetia bifurcata especially for palm enthusiasts in cooler climates.