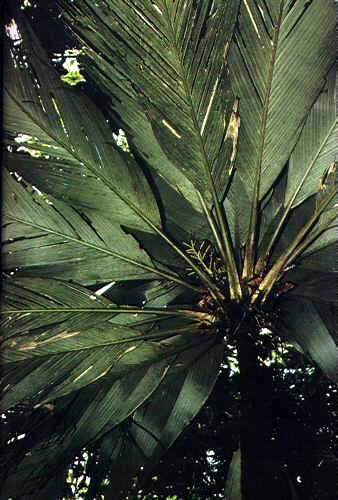 Said to be one of the world's rarest palms, it is also considered to be exceptionally attractive, displaying a dense crown of about 15 large undivided, pinnately veined leaves to over 2 metres in length and 1 metre in width on short unarmed petioles. The trunk is slender to about 10 metres in height and 15cms in diameter. The large fruits, to about 8cms in diameter, borne on short stout inflorescences within the leafbases, are of unusual form: round with a corky-barnacled appearance, light brown in colour and apparently reaching maturity only once having fallen to the ground. Fruits taken prior to this usually fail to germinate.

At maturity, the mesocarp is of a pasty, lightly fibrous texture, similar to avocado pulp, with a sweet pungent odour which some may find offensive, somewhat resembling a combination of mild durian and custard apple flavours. The seed is enclosed in a smooth endocarp which becomes brittle and cracks prior to germination. 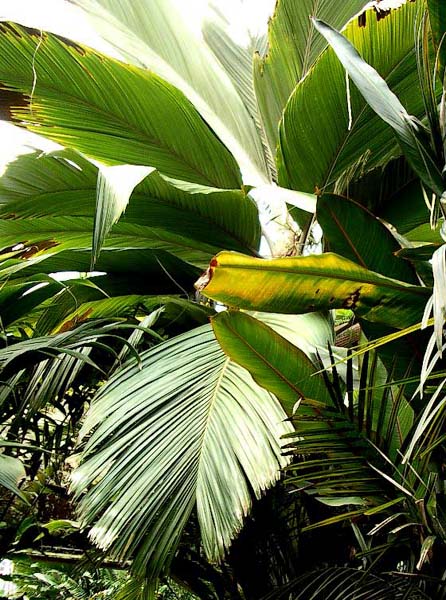 Taxonomically it is included within Iguanurinae, a subtribe with numerous genera (about 26) occuring in the SouthWest Pacific, West Pacific, South-East Asia and with other widely distributed genera such as Satakentia from the Ryukyu Islands to the south of Japan, Dictyosperma from the Mascarenes in the Indian Ocean east of Madagascar and Bentinckia from South India. Pelagodoxa's position within Iguanurinae is determined by the endocarp possessing an operculum, a cap covering the embryo of the seed, a feature shared only by Oncospermatinae, and not possessing armature or spines, unlike Oncospermatinae. The nearest relative to Pelagodoxa is Heterospathe but this affinity is tenuous as the nature of Pelagodoxa fruits isolate it somewhat within the Arecaceae. It is considered to be native to the Marquesas, an isolated group of islands some 8° south of the Equator in the central Pacific Ocean, where it occurs naturally in very moist, humid valleys as an understorey component. This population is only small and obviously endangered as regeneration has been restricted due to the encroachment of agriculture in the vicinity. Naturalisation of Pelagodoxa henryana has occured in the Solomon Islands, where a cultivated grove near a long abandoned settlement has regenerated. A recent report of a Pelagodoxa sp. which has fruits to only 2cms in diameter at maturity as occuring in Vanuatu, has fueled speculation that there may be another species, but a determination has yet to be completed. One may presume at this stage that this small population in the Banks Group may be depauperate specimens of Pelagodoxa henryana. Further study is presently being carried out. The cultivation of Pelagodoxa appears to present no problems within the humid tropics. Shade and abundant moisture for seedlings and juveniles is essential in a very well protected area if the leaves are to retain their fullness, as they are easily split and spoiled by wind and even mild exposure. Growth can be fast, with the formation of a trunk commencing after about 6 years. 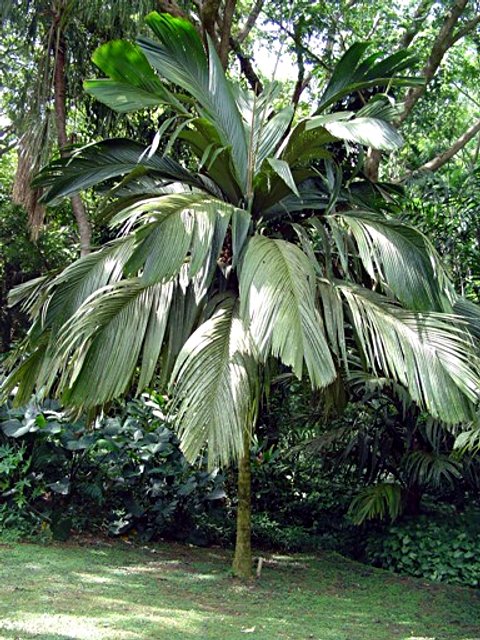 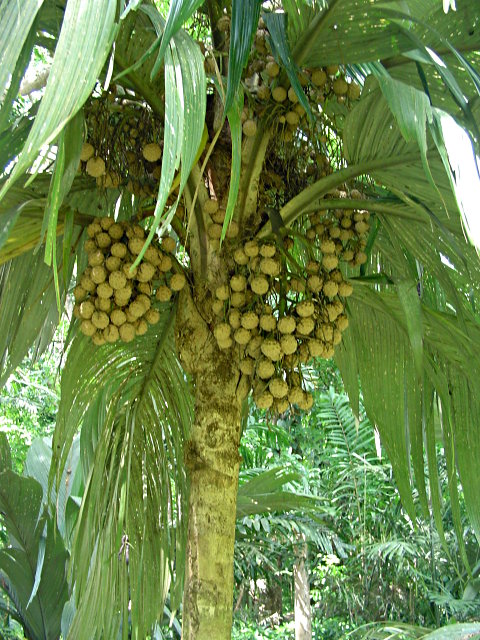 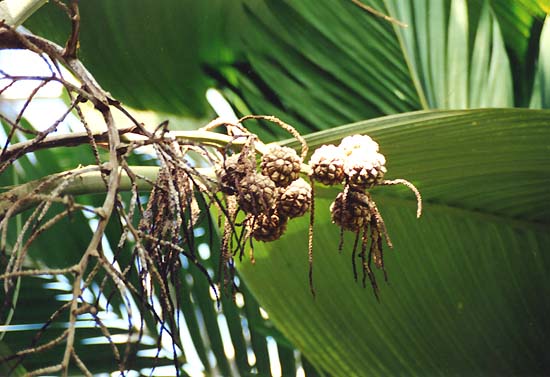