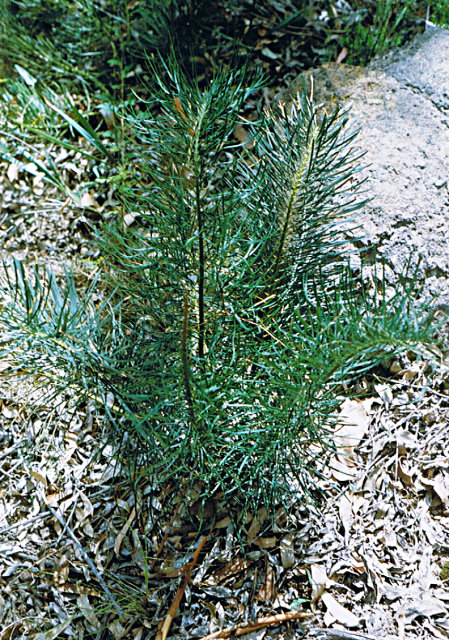 Macrozamia stenomera is a small (Section Parazamia) cycad that is endemic to New South Wales. It has a subterranean caudex and unique multi-divided pinnae.

This species was described in 1959 by (the late) Dr L. A. S. Johnson, when he undertook a reclassification of the nomenclature of Australian cycads. Dr Johnson (a former Director of the Royal Botanic Gardens Sydney) found that M. stenomera, which had not been previously distinguished from M. heteromera, warranted recognition as a separate and distinct species. It was named after its narrow divided leaflets.

M. stenomera grows in north-western New South Wales in an area centred principally around Mt Kaputar, which is the highest point of the Nandewar Range. Mt Kaputar is located approximately 50 km east of Narrabri. M. stenomera also grows in sandy soil on the plains nearer to Narrabri; and there is a disjunct population on the Moonbi Ranges, near Tamworth.

Narrabri (elevation 212 metres) has an annual average rainfall of 660 mm (spread over 64 rain days) with winter minimum and summer maximum daily temperatures, reached at least once per week in July and January, of - 0.8°C. and 37.6°C. respectively. Frosts occur on an average of 29 days per year. 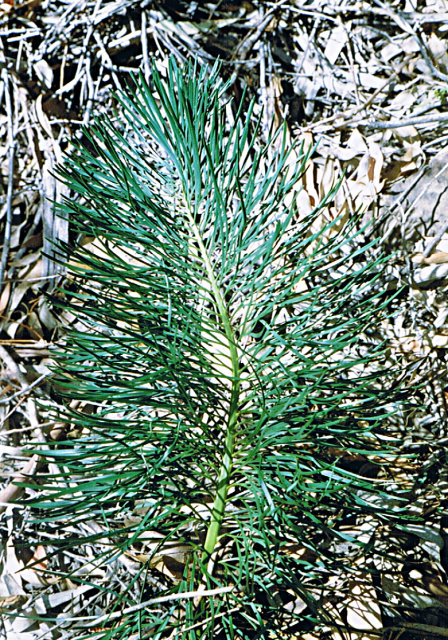 One-third of the annual rainfall at Narrabri falls sporadically during summer, with the balance of the rainfall being spread evenly (on a seasonal basis) over the rest of the year. The seasonal rainfall pattern is as follows: Summer: 33%, Autumn: 22%, Winter: 21% and Spring: 24%.

There is no official weather station on the Nandewar Range but the climate on the higher altitudes of Mt Kaputar, where M. stenomera grows, is significantly cooler and wetter than in nearby Narrabri. According to local sources, the temperature on the upper altitudes of the ranges can be up to 10°C. cooler than Narrabri; while the annual rainfall is considerably higher, averaging approximately 1,200 mm annually.

M. stenomera grows on the rocky, generally north-facing basalt slopes of Mt Kaputar, at an elevation of about 1,450 metres (4,500 feet) it is thus a true mountain dweller and is subject to extreme weather conditions. M. stenomera normally grows in a pattern of scattered individual plants or, occasionally, small groups of plants, on shallow, stony, eroded basalt soil.

On the higher parts of Mt Kaputar, where M. stenomera grows, the vegetation is made up of a heath-like understorey on exposed shallow soils and sub-alpine woodland on deeper soils. Snow gums (Eucalyptus pauciflora) flourish above 1,350 metres. High winds, frequent frosts and occasional snow (4/5 times per year) are also encountered on the upper altitudes of Mt Kaputar.

The variability of this species is highlighted by the fact that on Mt Kaputar it grows in a sub-alpine environment, whereas it also grows in much hotter and much drier conditions in sandy soil on the plains near Narrabri.

As an aside, the highest peak on the Nandewar Range is the 1,510 metre high Mt Kaputar, which became a National Park in 1967. The view from the summit of Mt Kaputar is spectacular and a Visitor Information sign indicates that on a fine day up to 10% of New South Wales can be seen from the peak of Mt Kaputar. Kangaroos and multi-coloured feral goats can often be sighted within the confines of the National Park (though the goat population has recently been reduced by culling). 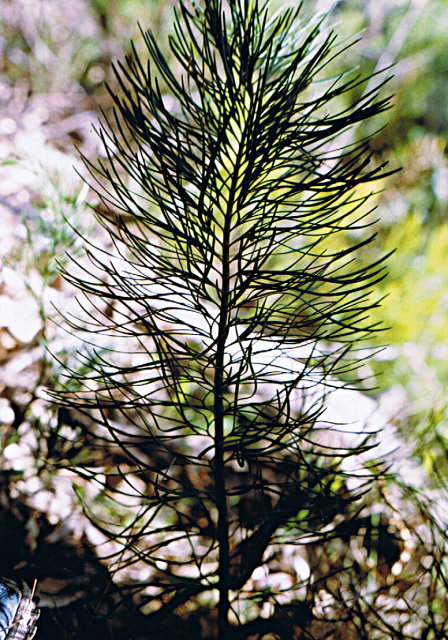 The principal characteristics of M. stenomera are as follows:

and which often has a moderately curved apical section

The coning cycle of this species is irregular. Female plants usually have a solitary cone, but sometimes two cones are produced. Male plants can have up to 4 cones.

Seeds can have either red or yellow coloured flesh. The yellow seeds are an attractive lemon yellow colour, sometimes with a green segment where the sporophylls have opened up, exposing the seeds, prior to the cone disintegrating. 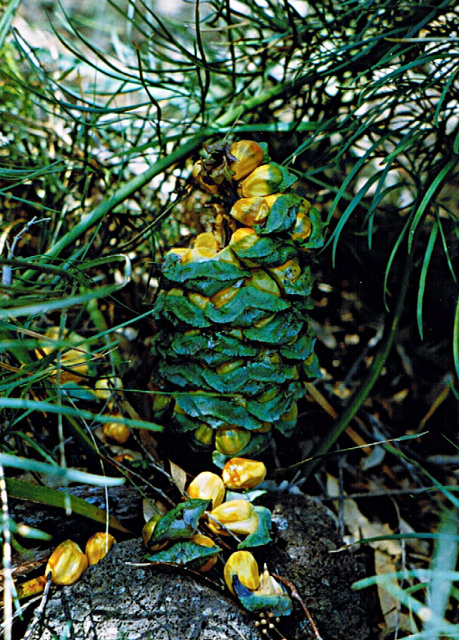 In contrast to M. diplomera, M. heteromera and M. glaucophylla, which have pinnae that normally divide once or twice (or sometimes three times) after the initial bifurcation, M. stenomera has much narrower pinnae that normally divide multiple times, except towards the tip of the frond when the last few pinnae are usually entire. The maximum number of sub-leaflets that we have seen on a pinna is thirteen.

The multi-divided pinnae give the fronds of M. stenomera a very bushy look and make it extremely difficult to be able to clearly distinguish the pinnae detail, even in habitat conditions, unless a thorough close-up examination of the frond structure is undertaken.

Furthermore, because of the bushy effect of the multi-divided pinnae it is virtually impossible to capture details of the frond characteristics in a photograph of a plant to overcome this problem, we have photographed a number of individual pinna and a frond with only every sixth set of pinnae left intact on the rhachis. The effect is to give a clear impression of the pinnae detail to a person who may not have seen M. stenomera in the wild.

The frond/pinnae characteristics on M. stenomera are very complex (and very hard to describe). A short stem extends from the rachis at an angle of approximately 70 degrees. The stem is twisted at the base so that the pinnae face upwards towards the apex of the frond. The stem then divides into two main "arms" (roughly in the shape of a V). A variable number of further divisions then occurs, ultimately producing somewhere between 4 and 13 sub-leaflets. As a consequence, the sub-leaflets are densely crowded and overlap each other and accentuate the bushy look of the multi-divided pinnae. The division of the pinnae is also evident in seedlings and juvenile plants though the divisions are not as numerous. 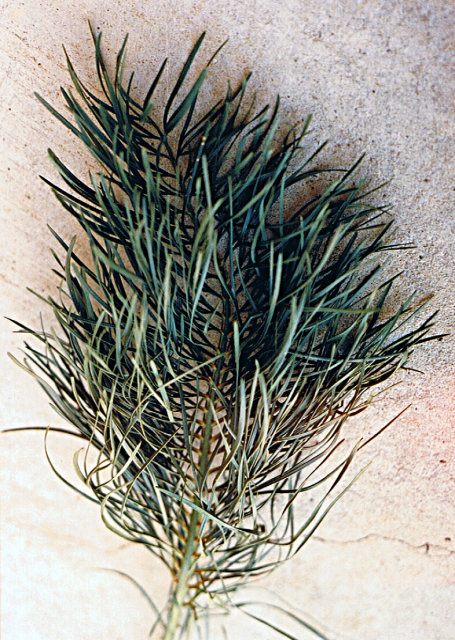 Bushfires occur periodically on Mt Kaputar. Records show that major bushfires have occurred on Mt Kaputar in 1951, 1957, 1974, 1986 and 2006. The 2006 bushfire lasted for seven weeks, beginning in November 2006 and ending in January 2007. This fire burnt through some 14,500 hectares out of a total area of 41,000 hectares; but, fortunately for the environment, it was generally a low intensity fire. 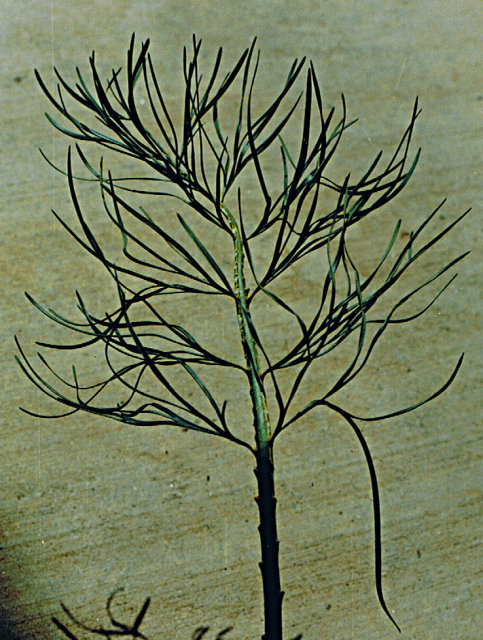 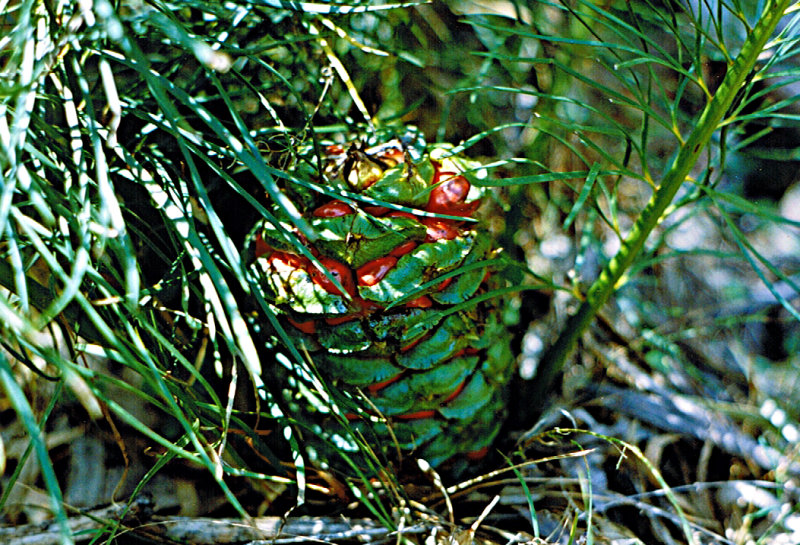 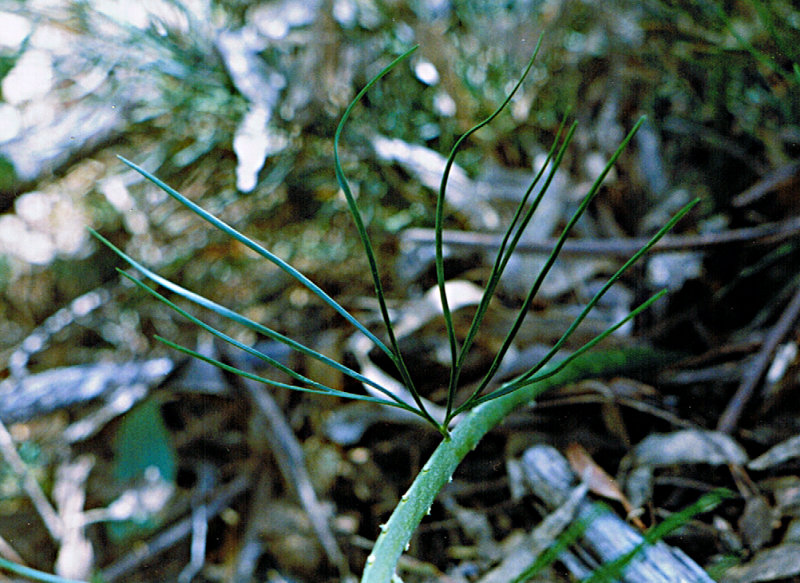 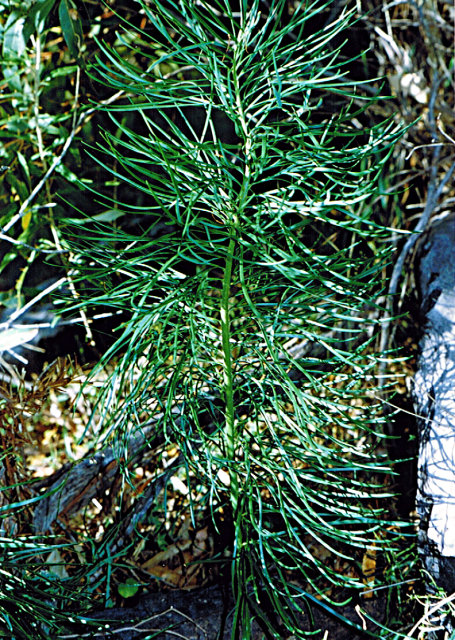 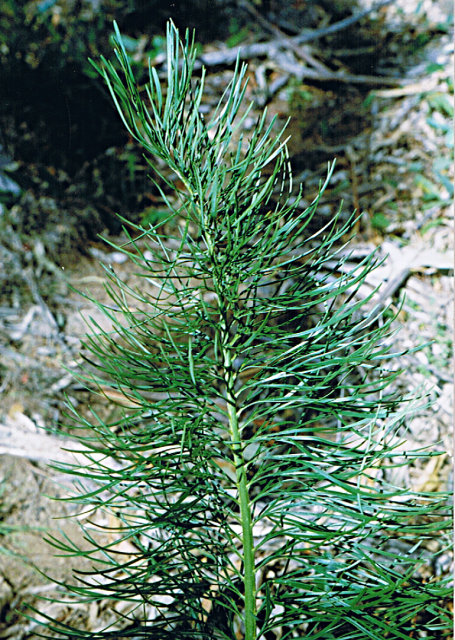 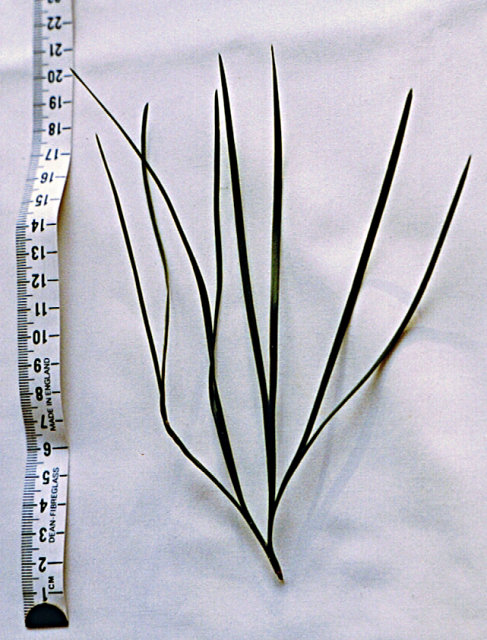 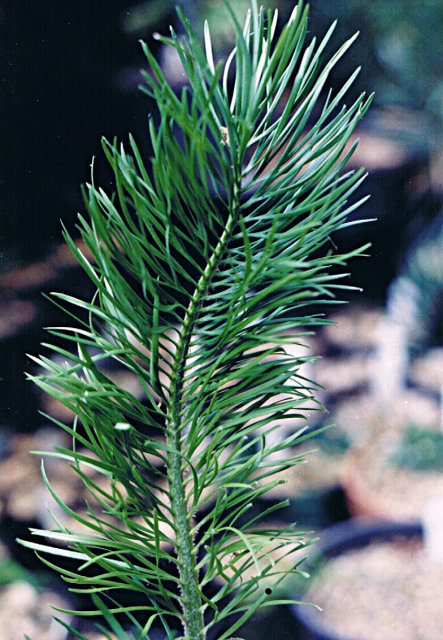 Craig Thompson and Paul Kennedy (Text & Figures1-12)
Note: This article is part of a major revision of an article by Paul Kennedy that appeared in
Issue No 55 of Principes minor in March 1992 and, also, in the Volume 16, No 3 of the Cycad Newsletter in December 1993.