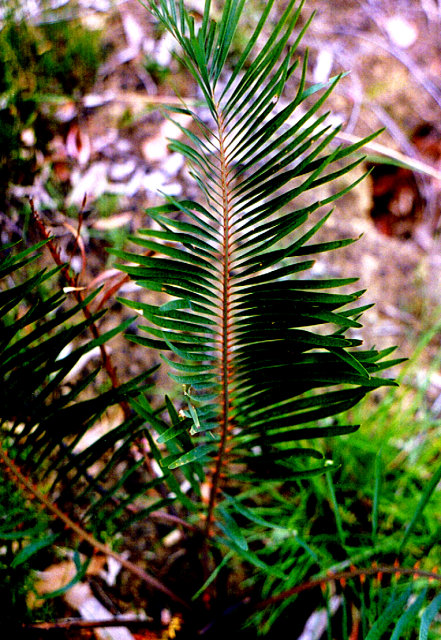 Macrozamia spiralis is a small (Section Parazamia) cycad that is endemic to New South Wales. It has a subterranean caudex and fronds that normally have a moderate spiral twist.

This species has been the subject of some confusion, even in Australia, as a consequence of the 1959 revision of the nomenclature of Australian Zamiaceae by the late Dr L. A. S. Johnson, when the species now known as M. communis was created. Prior to this revision, various cycads in New South Wales (since falling under the M. communis umbrella) and, also, M. lucida in Queensland were often mis-identified as M. spiralis.

M. spiralis has a fairly widespread distribution range extending from the outer southern, south-western and western suburbs of Greater Sydney to the lower Blue Mountains and, also, to parts of the Goulburn River Valley.

M. spiralis grows near Richmond, to the west of Sydney, in areas of flat, poor quality, sometimes sandy, soil.

M. spiralis normally grows under a eucalypt canopy in a pattern of scattered individual plants or, occasionally, small clusters or large groups of plants. These small clusters of plants contain as many as 10-12 plants growing within a 2 metre radius, while the largest group of plants that we have seen contained approximately 40 plants growing in an area measuring 2.5 x 5 metres.

The reason for this clumping tendency is somewhat intriguing, though we suspect that it is simply the result of seeds germinating and growing to maturity in close proximity to parent plants, while the reason for the scattered individual plants is partly attributable to seed dispersal by marsupial animals.

In very rare cases a plant will be found with multiple heads, no doubt due to damage to the upper part of the caudex. One such plant which we have seen had seven separate heads of fronds, giving the effect of a very leafy specimen (albeit with reduced sized fronds). 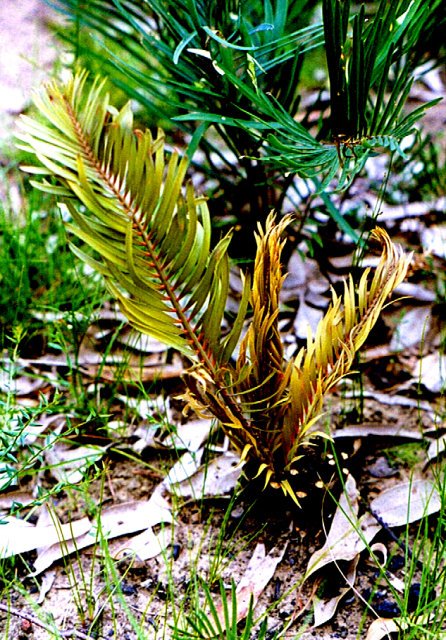 Richmond (elevation 20 metres) has an annual average rainfall of 799 mm (spread over 112 rain days) with winter minimum and summer maximum temperatures, reached at least once per week during July and January, of -1.7 and 34.4 ° C. respectively. Frosts occur on an average of 43 days per year.

One-third of the annual average rainfall at Richmond falls during summer, with the balance of the rainfall being spread fairly evenly (on a seasonal basis) over the rest of the year. The seasonal rainfall pattern is as follows: Summer: 33%, Autumn: 27%, Winter: 19% and Spring: 21%.

The principal characteristics of M. spiralis are as follows:

The number of fronds per plant averages about 6-8; with some plants having as few as 2 fronds, ranging up to a maximum (that we have seen) of 17 fronds. The above ground height level of the fronds ranges from an average of approximately 60 cm to a maximum of approximately 90 cm. This cycad (along with most other Section Parazamia species) produces new fronds irregularly in the wild, except after a bushfire, when most plants produce new fronds.

At the stand near Richmond, new fronds are normally a distinctive blue-grey colour with vivid pinkish-red callouses where the pinnae join the rhachis. Very rarely, new fronds with an albino-like golden-bronze colour are produced. Over time, however, the frond colour changes from blue/grey to green; and, likewise, the callouses also undergo a colour transformation and change from pinkish-red to a yellowish or creamy-white colour.

Plants in this habitat location are extremely attractive when new fronds are produced; though they become less attractive as the frond colour changes with the passage of time and, also, as a consequence of deterioration in the condition of the fronds that sometimes occurs because of damage caused by leaf-rolling insects.

In other locations, the frond colour varies, in adult plants, from grey-green to dark green. 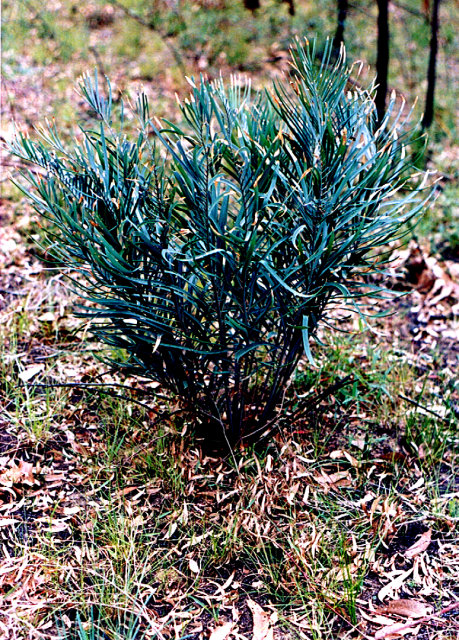 Female cones are usually solitary, though plants with 2 cones are not uncommon. Male cones range from 1 to 4 per plant. Coning is erratic, but seems to occur every 3-4 years; often with a large percentage of plants within the population taking part in the coning cycle. In intervening years few cones, either male or female, are produced.

This species is an extremely slow growing cycad, both in terms of juvenile plants (particularly when grown from seed in cultivation) and, also, in terms of the production of new fronds on mature plants in the wild.

On an affinity basis, M. spiralis is closely related to M. elegans, a new species named in 1998 by Ken Hill and David Jones.

M. elegans (which was previously known in Sydney botanical circles as robust M. spiralis ) has typical M. spiralis features, such as moderately spirally twisted fronds and reddish callouses at the base of the pinnae, but has much larger and more numerous fronds/pinnae and larger cones and seeds.

As mentioned previously, confusion has occurred (and apparently still exists, more so outside of Australia) with the identification of M. spiralis and M. communis. Distinguishing the two species is relatively easy, purely on a size basis, as M. spiralis is a small cycad with an average of 6-8 fronds standing up to approximately 60 cm above ground level, whereas M. communis is a large cycad with up to 100+ fronds which can extend up to 2 metres above ground level (from a subterranean caudex). 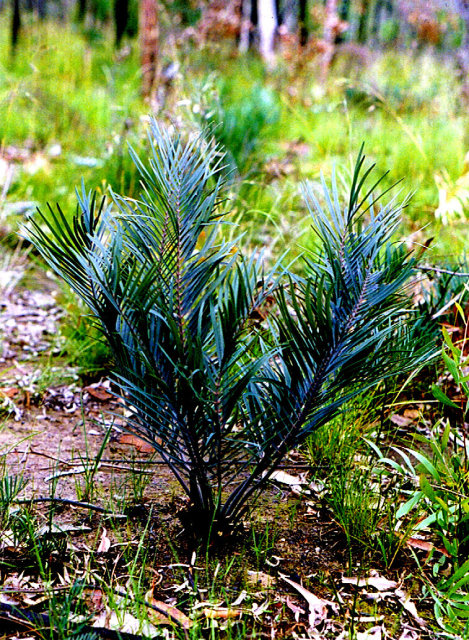 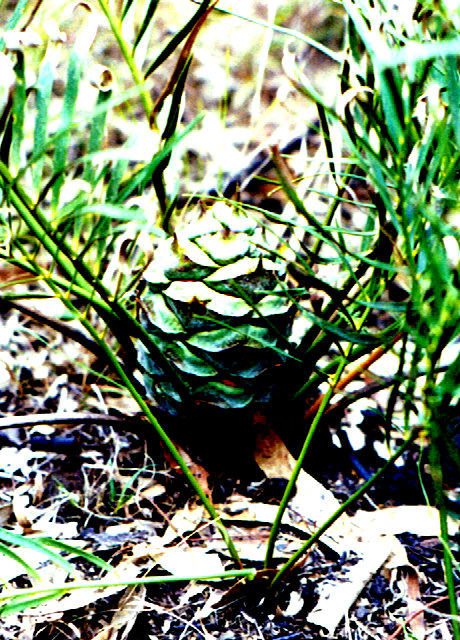 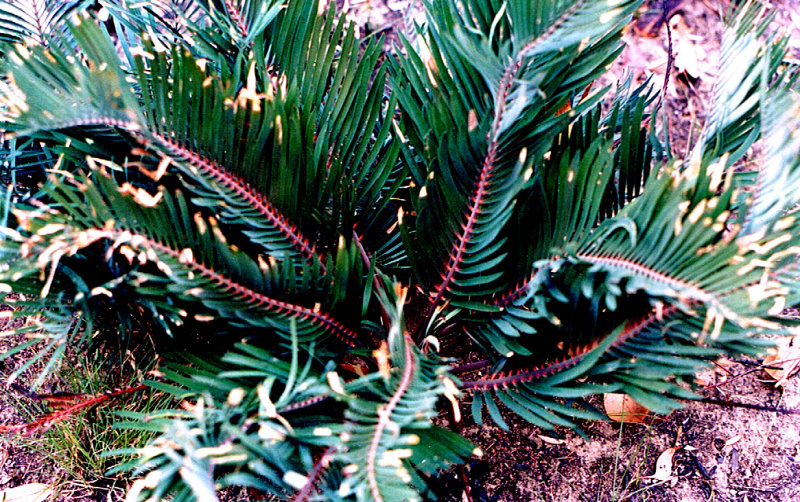 Figure 6. M. spiralis in habitat with new fronds (after a bushfire). 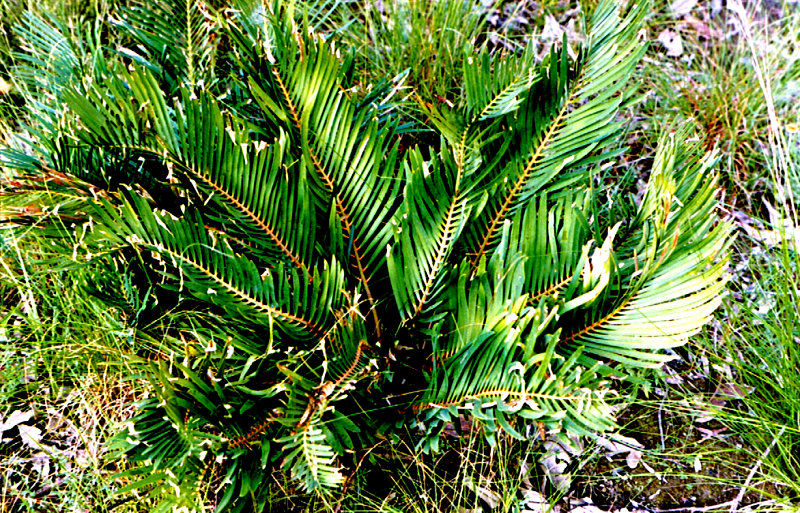 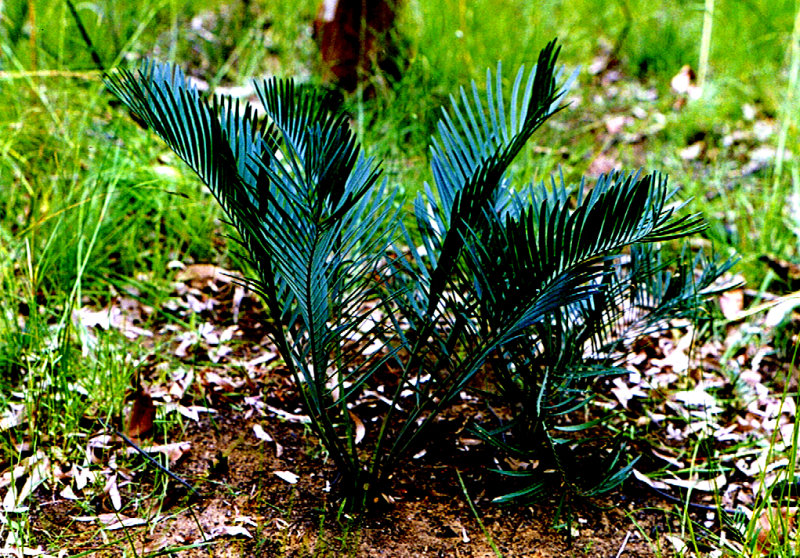 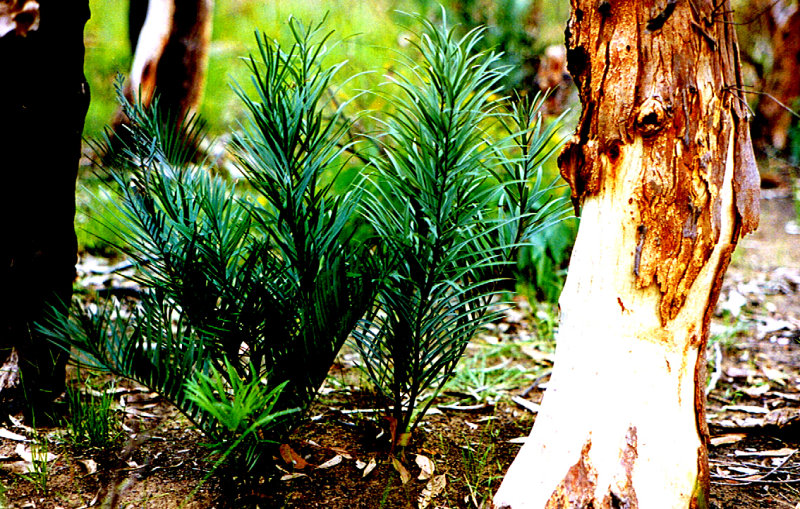 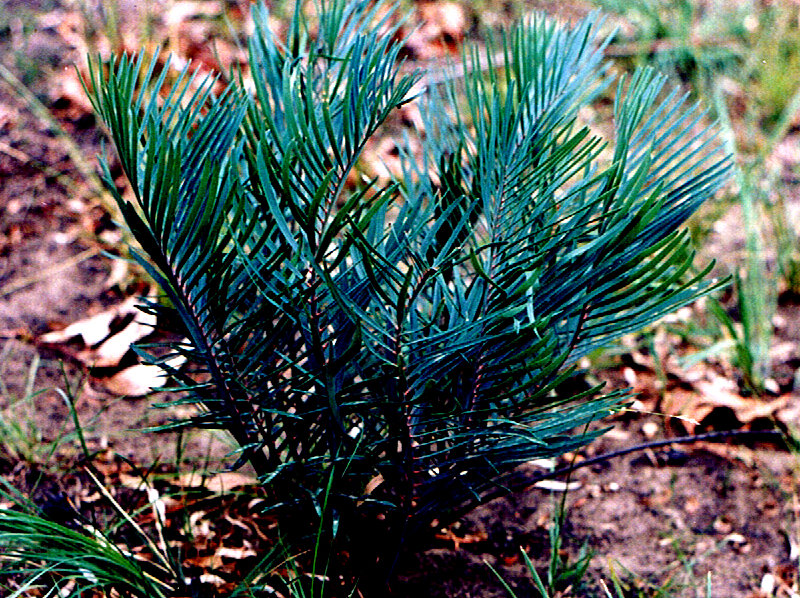 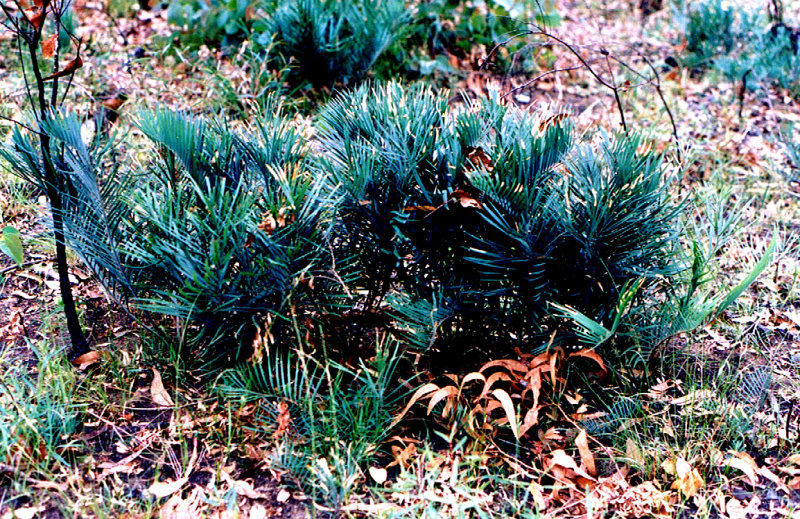 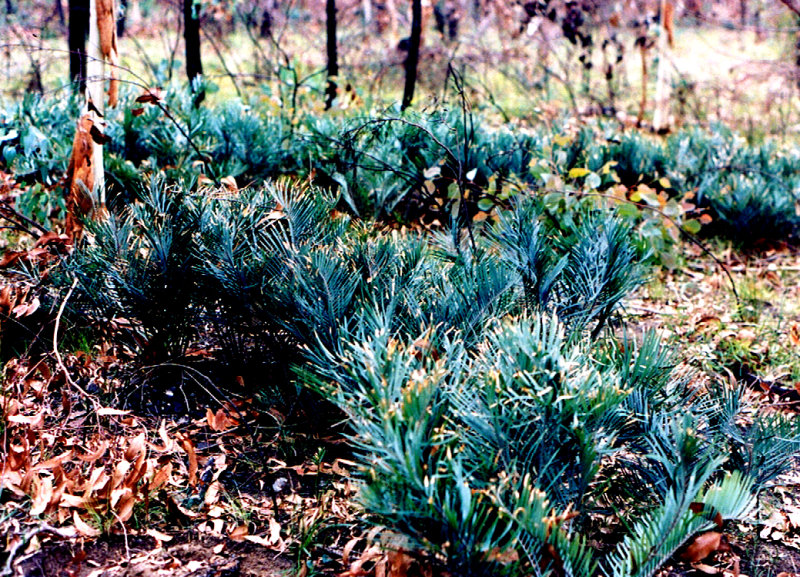 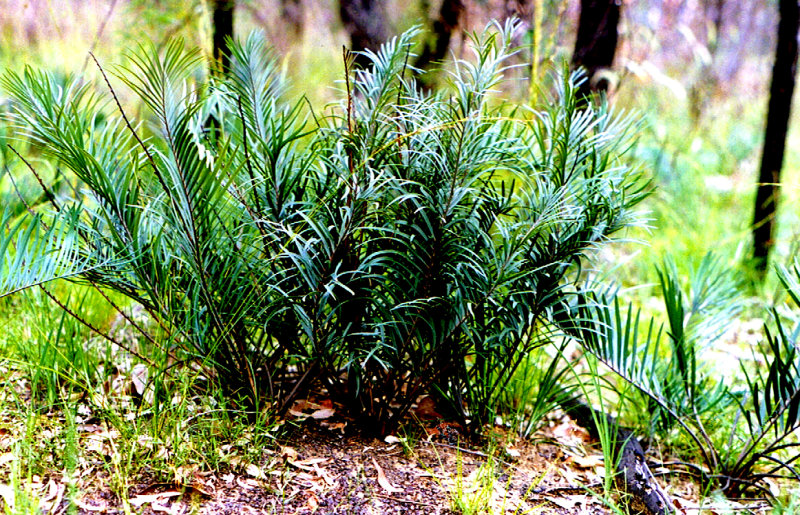 The plants here seem to be more of a grey-green colour compared those at Berkshire Park (where all the previous photos were taken). 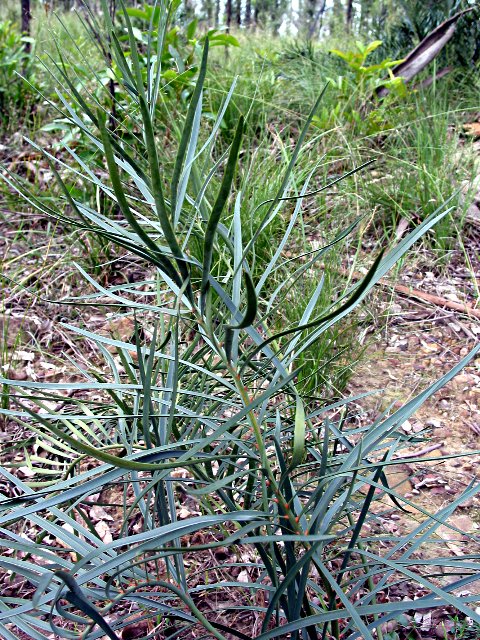 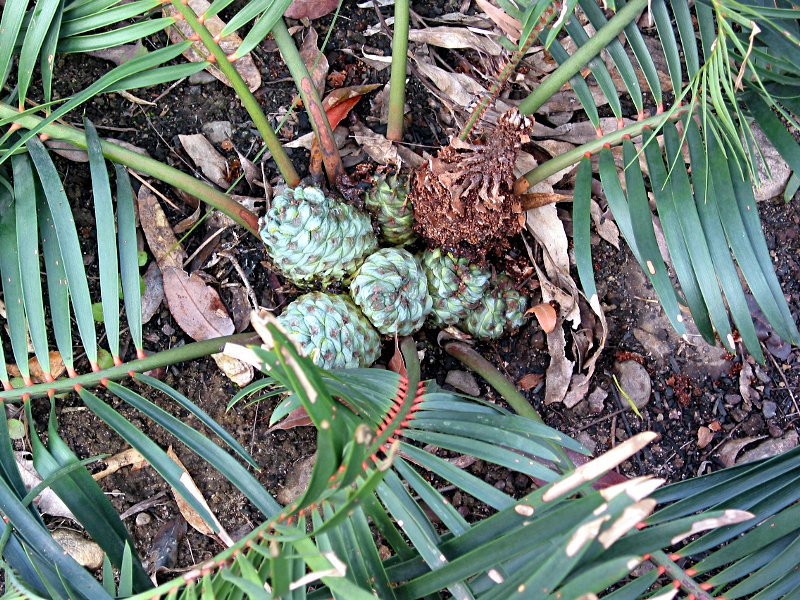 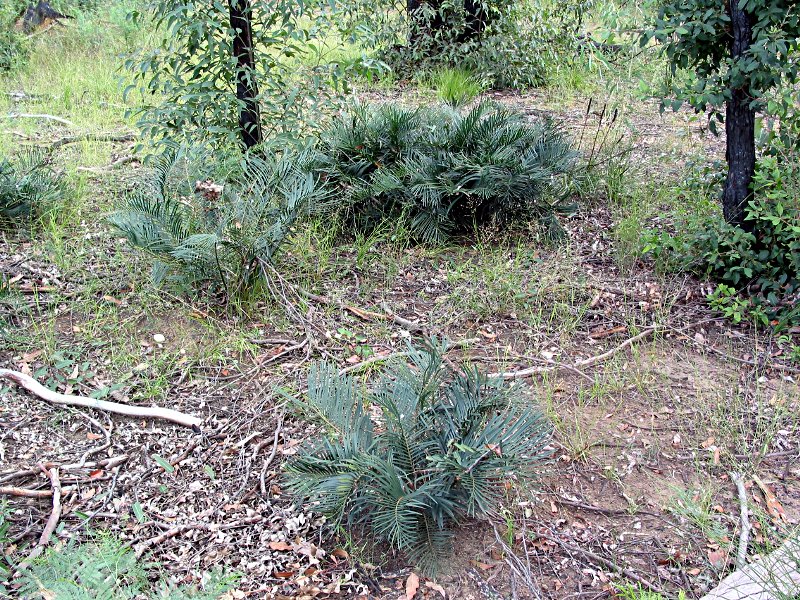 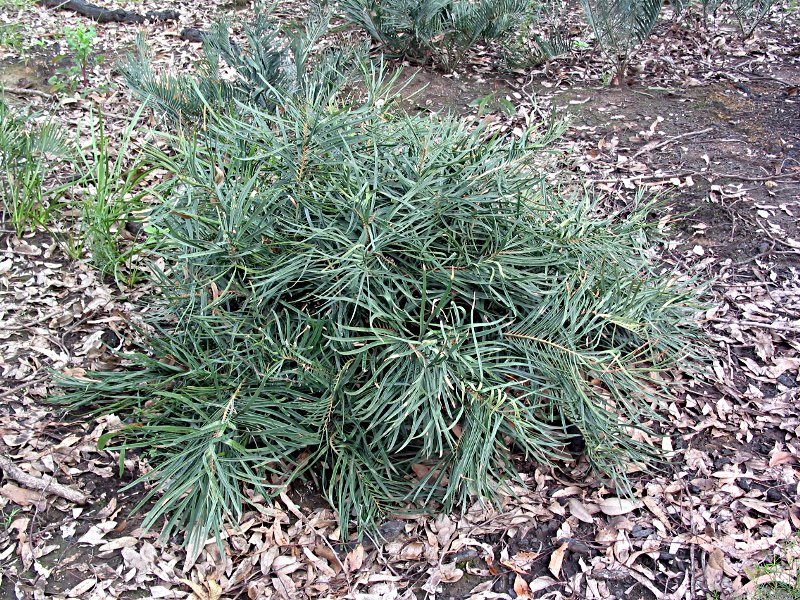 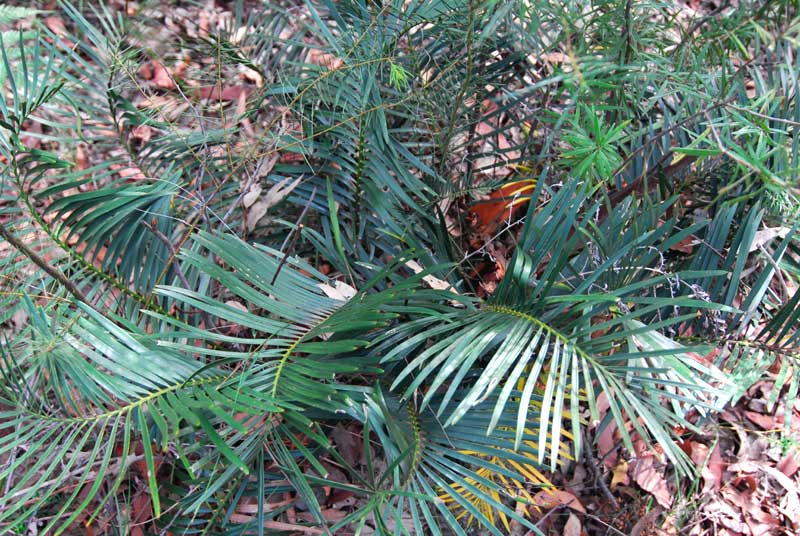 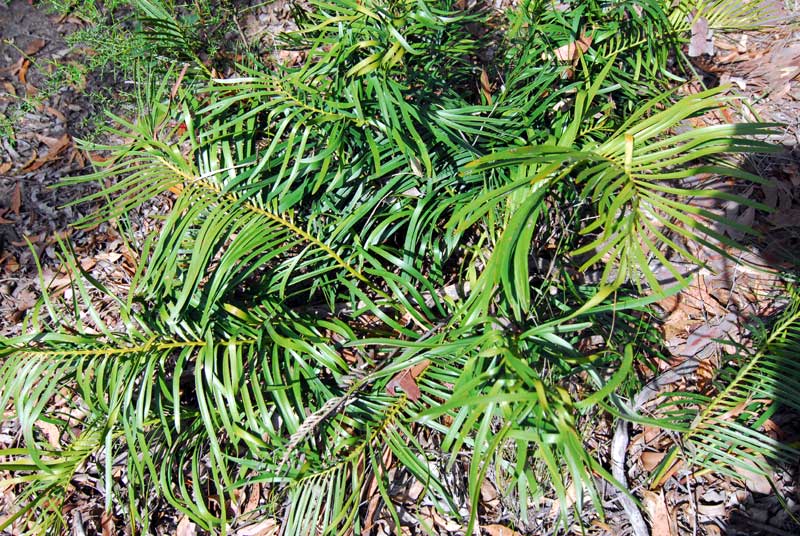 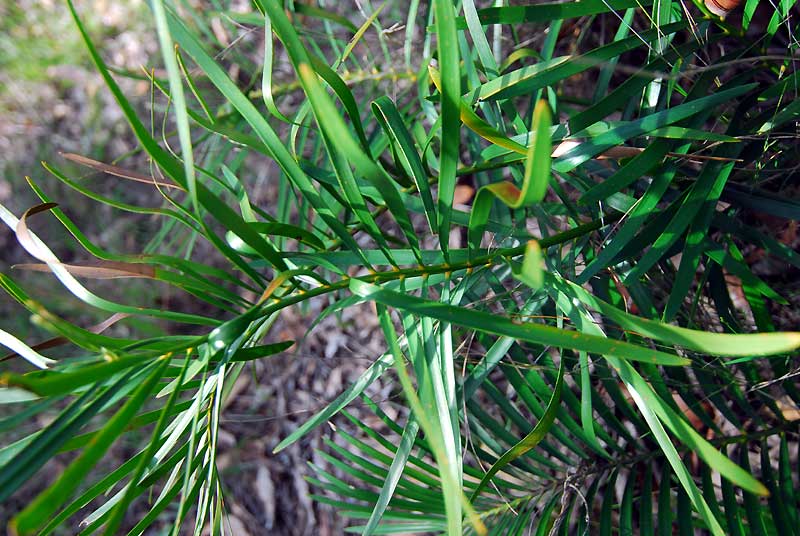 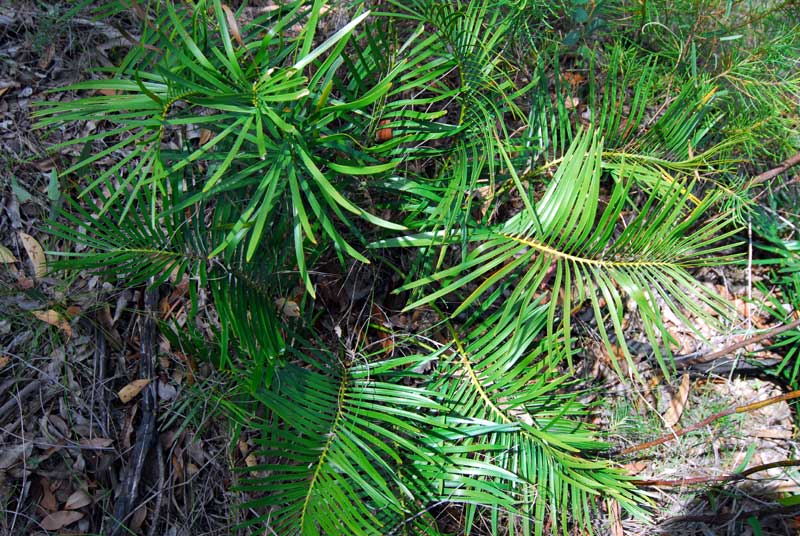 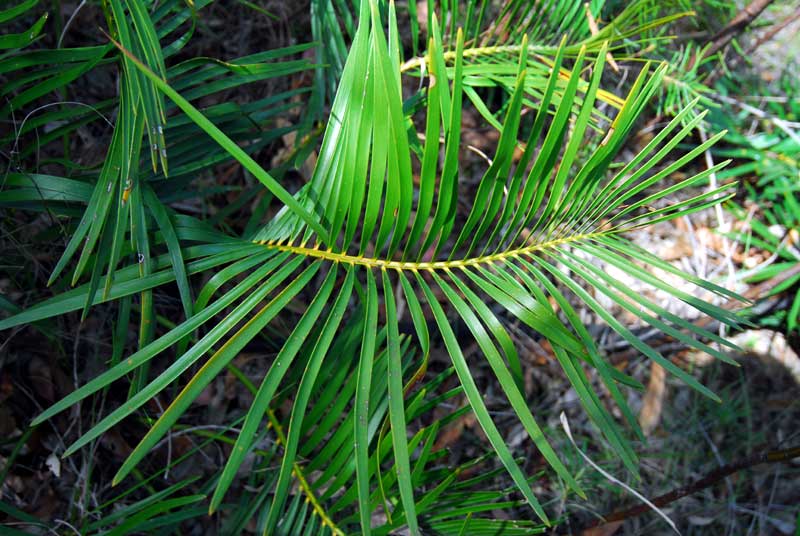