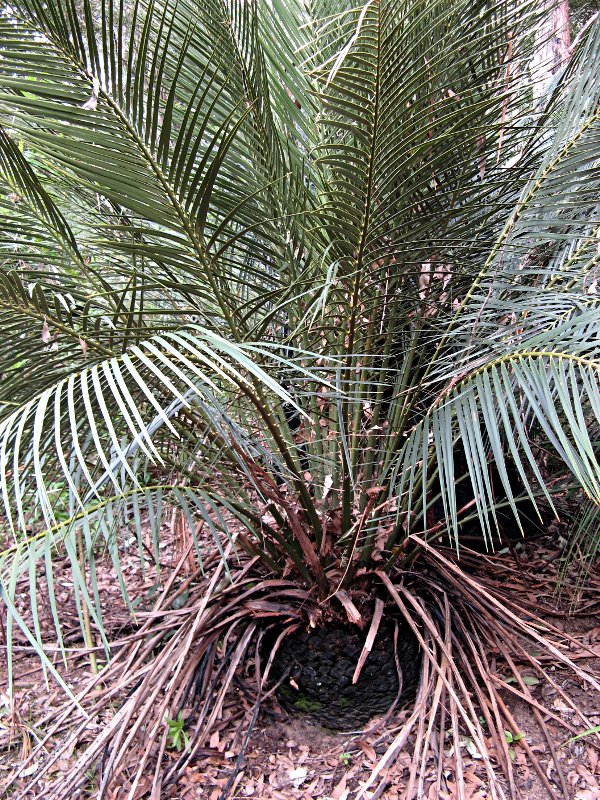 Macrozamia montana is a medium to large (Section Macrozamia) cycad that is endemic to New South Wales. It normally has a subterranean caudex, though it sometimes produces a short emergent trunk.

M. montana was described and named in 1998 by Ken Hill, when it was recognised as a separate and distinct species. It was named after its characteristic of growing in mountainous country, usually on the sides of steep ridges or slopes. It had previously been identified under the M. communis umbrella.

M. montana grows under a eucalypt canopy, in wet sclerophyll forests on well-drained soils. In the Mt George area it grows at an altitude of approximately 200 metres, whereas in the far north of its distribution range it grows at elevations sometimes exceeding 750 metres.

In the Mt George area it grows in large numbers and plants can often be seen, adjacent to public roads, on hilly areas at the top of steep man-made roadside banks. Access is therefore somewhat restricted, and is exacerbated because such areas are often heavily weed infested, especially by the noxious (introduced) weed, Lantana camara. 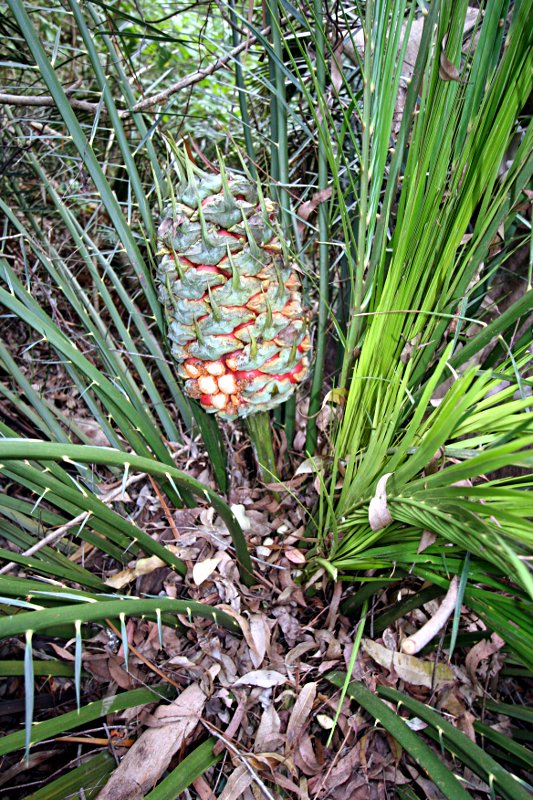 Figure 3. M. montana - close up of second female cone, on plant in Figure 5.

Armidale, which is located on the Great Dividing Range, with an elevation 980 m, has an annual average rainfall of 791 mm (spread over 81 rain days), with the maximum temperature rarely exceeding 35°C, but falling below 0°C on an average of 34 days annually. Long term records indicate that the highest maximum temperature recorded in Armidale was 36.5°C, while the lowest minimum temperature was -9.3°C.

According to an Internet report titled "Snow in Armidale" (updated 20 November 2007), snow falls at Armidale on an average of two days per year (down from three days in the early 1960"s), while the annual average number of frosts was reported as having risen from 91 (in 1981) to 100.

The principal characteristics of M. montana are: 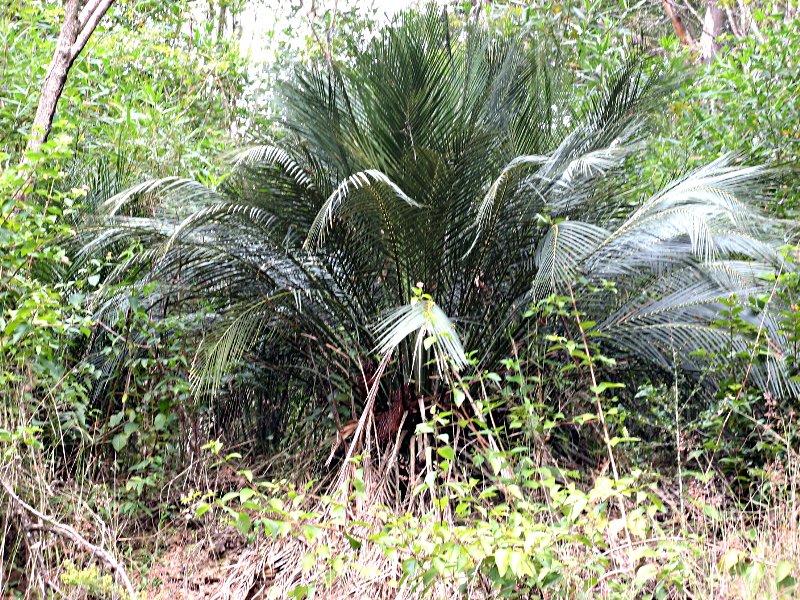 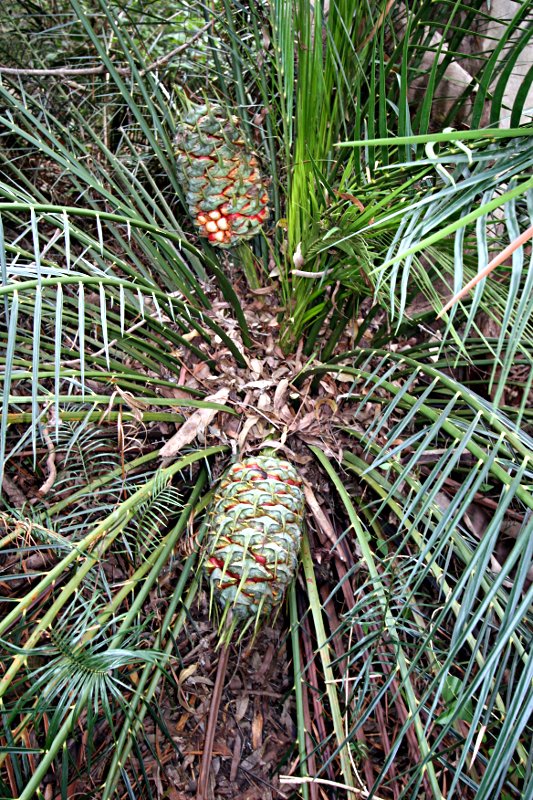 M. montana plants can have up to a maximum of 70 fronds. The fronds grow up to, and sometimes in excess of, two metres in length. We have sighted fronds measuring up to 2.4 m in the Mt George area.

As opposed to M. communis (which has petioles that range from 10-40 cm in length), M. montana has shorter and broader petioles (ranging from 6-15 cm in length), with numerous size-reducing spine-like pinnae, that extend progressively down the rhachis, sometimes almost to the point at which the petiole emerges from crown of the plant.

As they mature, female cones of M. montana appear to have a propensity to move from an almost perpendicular position to an almost horizontal position, sometimes resting on the ground. The cause of this trait is possibly due to a combination of the weight of the cone, coupled with an unusually long peduncle (cone stalk), which can range up to a length of 24 cm.

Female plants normally have either one or two cones, ranging up to 28 cm in length and 16 cm in diameter. Individual sporophylls are slightly longer and wider than those on M. communis cones. The sporophyll-spines on female cones are elongated. Mature female cones are sometimes found in a procumbent position. Male plants can have up to 4 cones. One interesting observation concerning female cones on most Macrozamia species is that marsupial animals start to remove and eat the flesh off seeds as soon as the cones commence to disintegrate " whereas on M. montana they sometimes remove the sporophylls from the basal section of the cones (that have not commenced to disintegrate) and then eat the flesh off the exposed parts of the seeds. 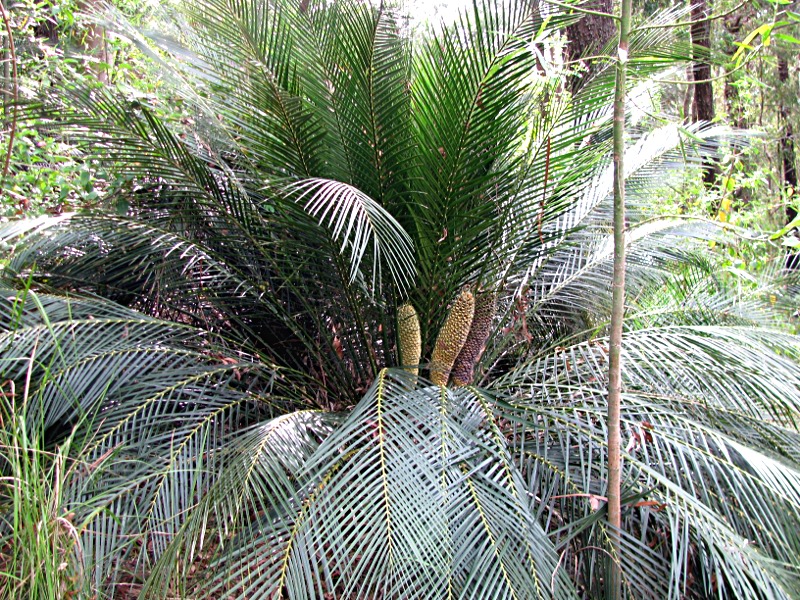 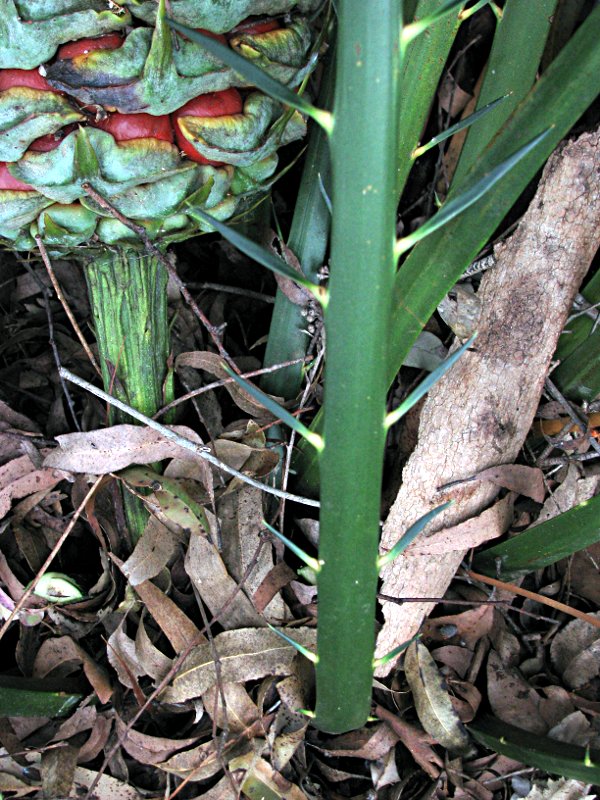 Figure 7. M. montana - close up of size-reducing spine-like pinnae,at the base of a frond.

M. montana is geographically isolated from other Macrozamia species and hybrids are non-existent in the wild.

M. montana is very closely related to M. communis, from which it was segregated; though this relationship is more applicable to the larger M. communis plants that grow on the New South Wales south coast, as opposed to the generally smaller plants that grow north of Newcastle. 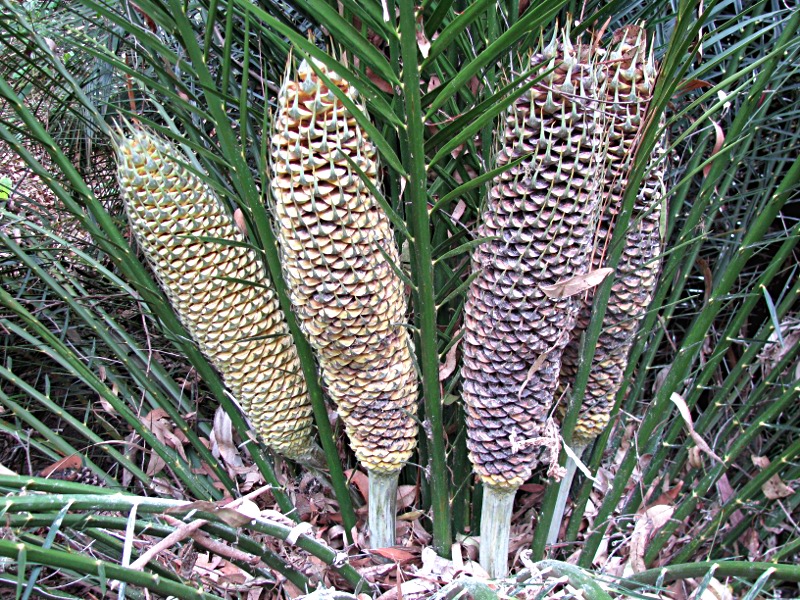 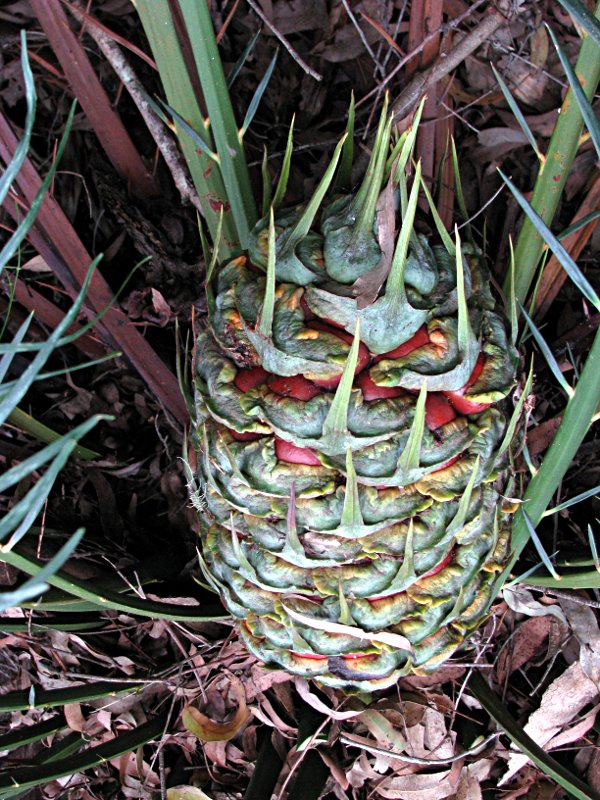 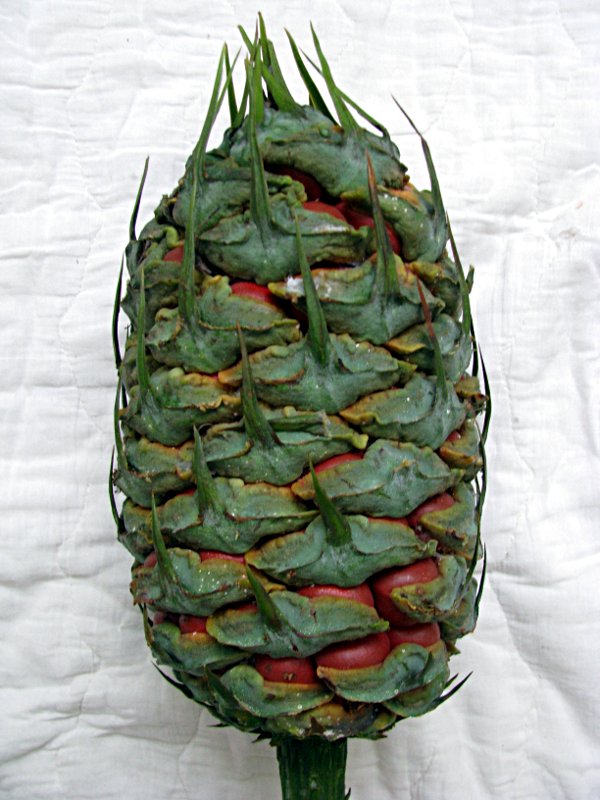 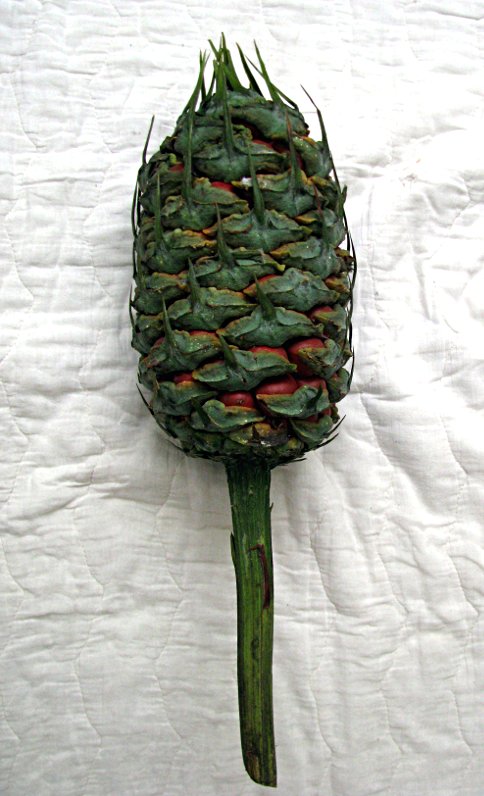 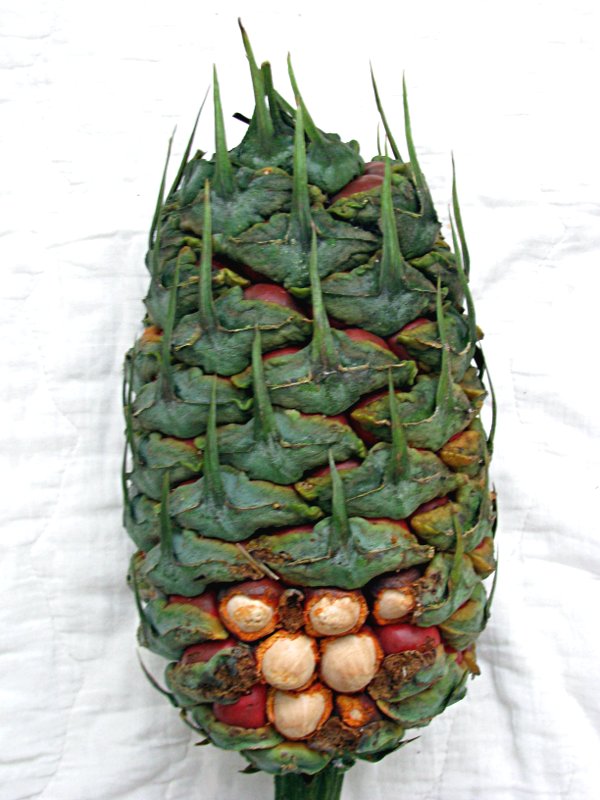 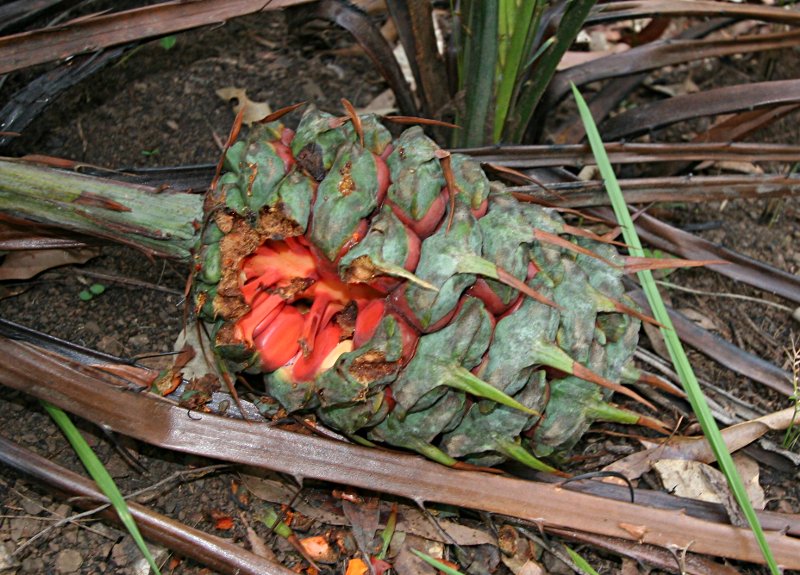 Figure 13. M. montana - female cone, in habitat,with flesh removed from seeds at the base of the cone. 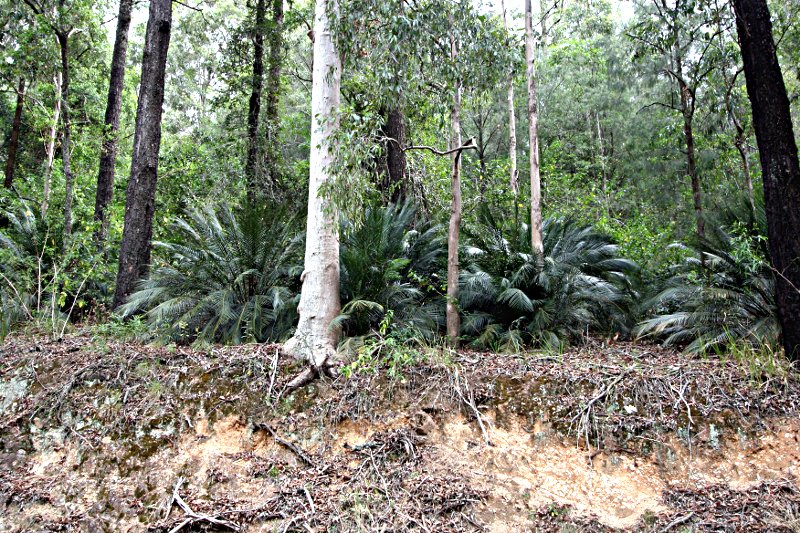 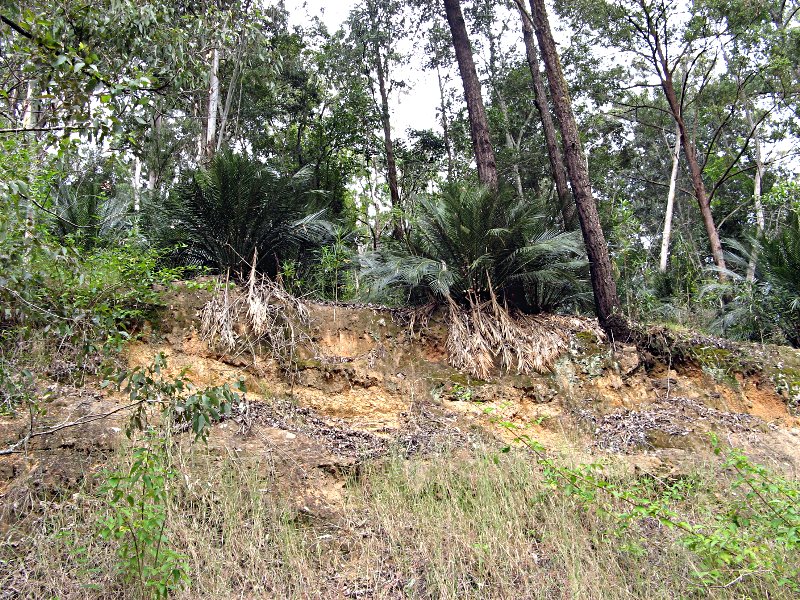 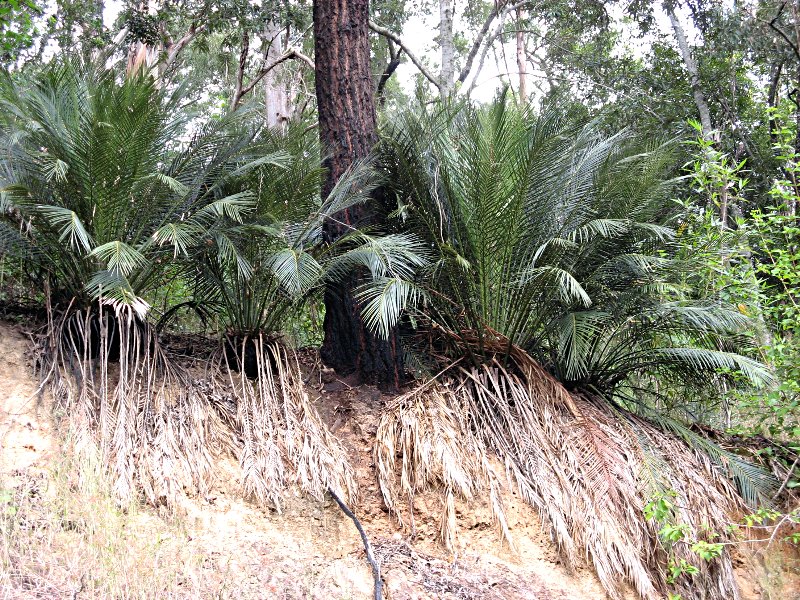 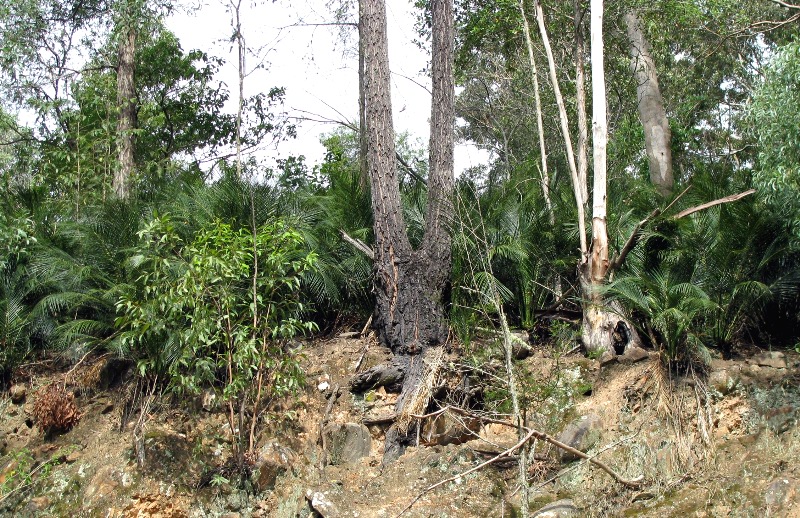 Figure 17. M. montana in habitat, showing the density of plants.