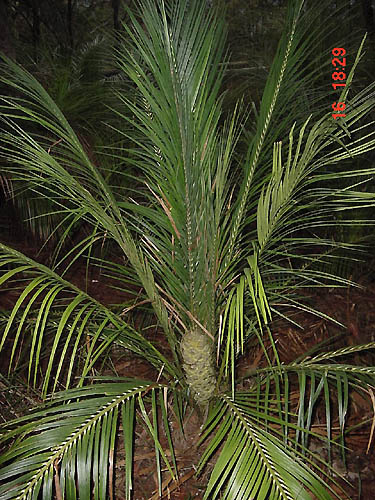 Macrozamia miquelii is one of the most under used cycads in both commercial and home gardens scenes. It is a very easy to grow and will take both full sun and shade. In Byfield national park it grows in semi-swamp in pine plantations and on dry rocky slopes. Bowenia serrulata also grows in this area and is something like a companion plant. If you wish to see this cycad up close the best place is Mt Archer on the outskirts of Rockhampton. While travelling through Byfield I came across one taipan and one death adder so I did not leave the road.

Macrozamia miquelii is perfect for medium to small yards. It is very easy to grow from seed though slow for the first few years. Your best bet would be to purchase a good size plant and add this to your garden. It grows very much like a small M. moorei to about 0.5 m high and about 1m across. Its male cone grows to 40 cm and female cone to 20 cm. The seeds are 2-3 cm when ripe and are a pale orange colour.

On Mt Archer it grows in abundance along pathways. This is the easiest and safest way to admire this very nice cycad. Cycas ophiolitica also grows on Mt Archer so in one trip you get to see two for the price of one.

The species known as Macrozamia miquelii is the most variable of all the Macrozamias. It was first named by Mueller in 1862 as Encephalartos miquelii. As will be noted in the literature the misnomer of the African genus was common in early Australian botany. Obviously the similarities were considered great.

The occurrence of this species is very widespread on the east coast. According to early collectors, it occurred in far northern New South Wales between the Richmond and Clarence Rivers. I have never located it in that area and suspect that the reports may have been of Macrozamia communis. Macrozamia miquelii is a handsome plant with blueish-green initially upright fronds, the lower circle of fronds arching to form a symetrical appearance. The caudex is usually subterranean and rarely evident although it occasionally reaches about 60cm tall and 50cm in diameter in the oldest of plants. 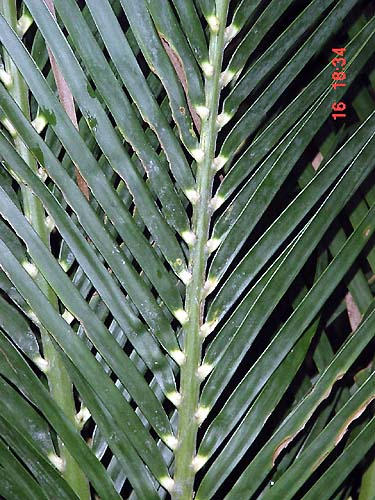 Distribution is placed from the New South Wales border northward to Gladstone in Queensland. The nearest stands to Brisbane are on hill slopes in the Upper Brookfield area where it grows prolifically. West of Gympie, while with a group of native plant researchers, we located a hillside of this cycad on a grazier's property at Glastonbury. The large colourful cones were ripening on the female plants about the month of November. The males had numerous cones in the leaf axils. Off the Queensland coast near Tin Can Bay lies Fraser Island, a subtropic terrain of forests, lakes and beaches and here occurs this variable cycad in rich profusion. In a semi-rainforest atmosphere amid Angophora, Banksia, Eucalypts and teatrees. Macrozamia douglasii grows in groves and as isolated individuals. Although once listed as a distinct species, the late Stan Blake of Queensland Herbarium and L.A.S. Johnson of New South Wales Herbarium have determined it is synonymous with the mainland Macrozamia miquelii.

Before I was aware of this I had noticed the similarities of the Gympie plants and the Fraser Island plants. Adding to the diversity of the species, the Fraser Island plants grow on sandy wallum loam and because of the nature of the habitat must receive considerable ground moisture from the freshwater lakes, creeks and springs that abound on the island. The largest plants we found near the sand tracks were two metres tall at the apex of the centre leaves Large heavy cones about 40cm long were well formed but immature in January. Near the centre of the island, I was shown several plants with thick established trunks about 30cm tall. Here also we found a few large plants of the glorious primitive fern Angiopteris. Returning to the mainland west of Bundaberg we find Macrozamia miquelii on Mount Perry, formerly known as M. mountperriensis but with that name now synonymous. It is smaller and not so prolific in the frond number. Another form, very similar to that of the Upper Brookfield colonies, occurs on Mount Archer near Rockhampton and again at Bowenia National Park north of Yeppoon where it grows in abundance with Bowenia serrulata. 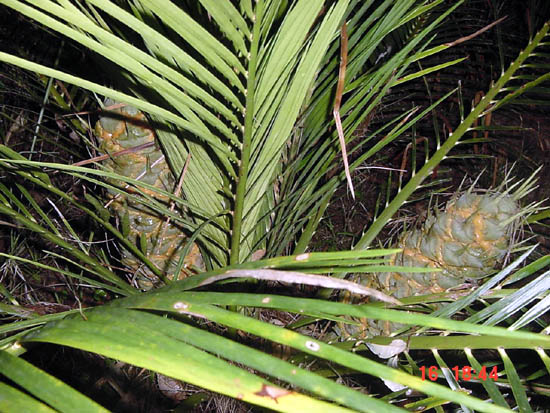 The mature cone of Macrozamia miquelii was the first of the genus given to me some years ago and the rich beauty and form of it made me think at that time that here was the best cone type of the Australian cycads. Since then I have studied the cones of Macrozamia riedlei (Western Australia), M. moorei (Queensland), M. communis (New South Wales) and M. lucida (Queensland) on various occasions and find them all to have individual merit and attractiveness. I have often thought this material would be ideal for floral artists. The cones would indeed far surpass the Banksia cones at present used in this way. However, the female cone has a short life and the male cones would have a longer life but would not be so attractive.

The cones start to mature approximately in January and can be harvested up to May. After this time most cones have split and been scattered by wild animals and only the occasional seed can be found near the parent plant. The orange coating on the seed is eaten by possums, bandicoots and dingos causing the seeds to be readily distributed throughout the immediate area. Domestic dogs have also been seen nibbling at the fresh seed coatings and upon nibbling them myself the taste was found not to be unpleasant. The starchy kernels are also eaten by other animals. Toxic compounds are present within the seed proper but can be removed by vigorous washing and pounding. Some cones appear to be light orange colour when mature but others found were dark red and still not ripe. It is thought that differing degrees of sunlight have some influence upon this colour variation but after closer investigation it was found that both coloured cones were appearing on plants growing in the same area. It has hence been concluded that intenseness of colour is not an indication of maturity. Perhaps this colour variation is caused by soil composition. 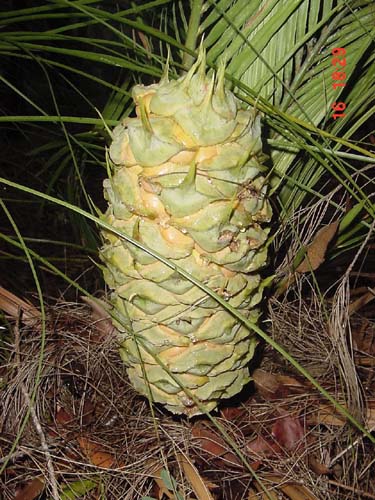 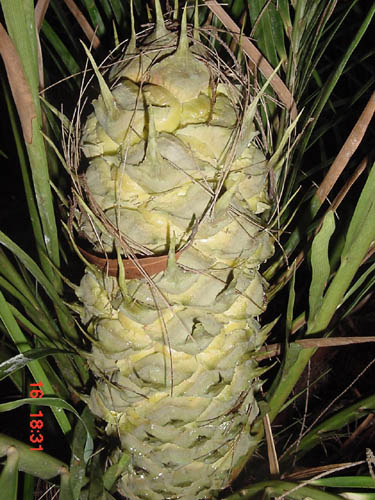 The cones of Macrozamia miquelii are approximately the size of a double fist. Most cones are well packed and some contain as many as sixty seeds and most would have at least thirty. Occasionally some young plants produce a very small lightly seeded cone. It has been noticed that after coning the female plant has drooping fronds. This may be caused by animals standing on fronds to reach the ripe seeds. As the seeds disperse however, the fronds gradually attain a more upright appearance.

No outstanding difference has been noticed between the male and female plants. Occasionally the female plants will be surrounded by many year old seedlings. Very few of these reach maturity when they germinate so close to the female plant. Some female plants have been known to produce four cones in a season, although these are usually the very large plants. Most display only one or two. Female plants do not bear cones every year. 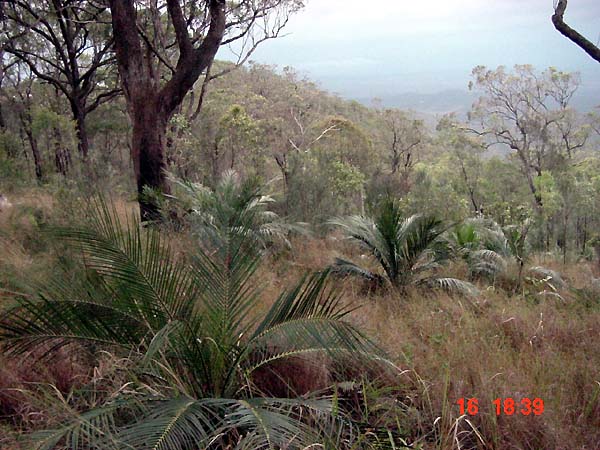 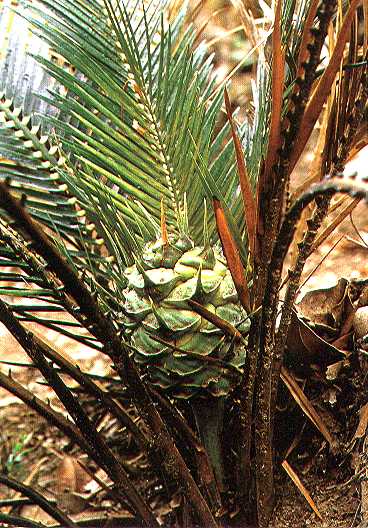 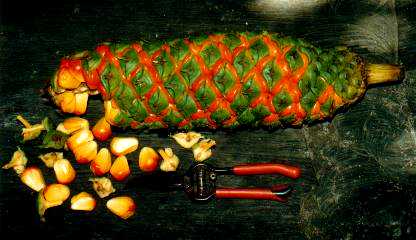