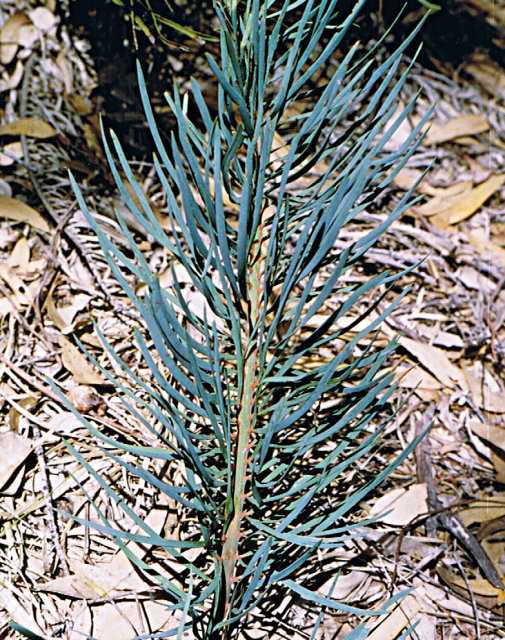 Macrozamia glaucophylla is a small to medium sized (Section Parazamia) cycad that is endemic to New South Wales. It has a subterranean caudex and normally has fronds with divided pinnae.

M. glaucophylla was described and named by David Jones in 1998, when it was recognised as a separate and distinct species. It had previously been identified under the M. heteromera umbrella and was known as either Macrozamia sp. "Northern Pilliga" or as the "blue form" of M. heteromera. It was named after its glaucous blue leaves.

M. glaucophylla usually grows in a pattern of isolated individual plants; while in some scattered locations it forms small thickly populated stands. M. glaucophylla grows in deep sandy soil, under a sparse canopy of either Callitris spp. (principally Callitris glaucophylla - the "White Cypress Pine") or Eucalyptus spp. (principally Eucalpytus creba - the "Narrow-leaved Ironbark"). Acacia spp. are also common. The canopy cover provided for M. heteromera is the most open canopy cover for any cycad population in New South Wales. 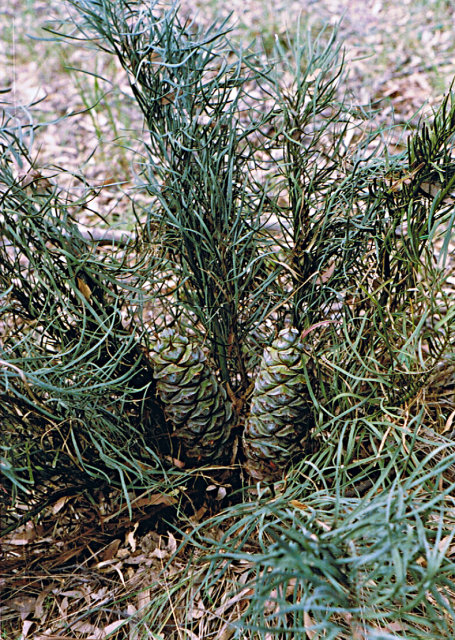 Narrabri (elevation 212 metres) has an annual average rainfall of 660 mm (spread over 64 rain days) with winter minimum and summer maximum daily temperatures, reached at least once per week in July and January, of -0.8°C and 37.6°C. respectively. Frosts occur on an average of 29 days per year.

One-third of the annual rainfall at Narrabri falls sporadically during summer, with the balance of the rainfall being spread evenly (on a seasonal basis) over the rest of the year. The seasonal rainfall pattern is as follows: Summer: 33%, Autumn: 22%, Winter: 21% and Spring: 24%.

The principal characteristics of M. glaucophylla are as follows: 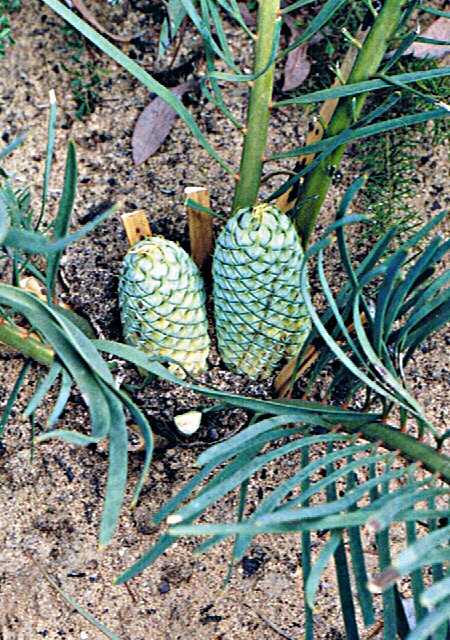 The number of fronds on M. glaucophylla normally ranges up to about 10, but there is a marked difference in size and symmetry between plants that grow in the northern and southern sections of its habitat. M. glaucophylla is more robust in the northern part of its distribution range, with plants generally having longer and more numerous fronds than plants in the southern part of the distribution range.

Moreover, these robust plants usually have longer and broader pinnae than either M. heteromera or M. stenomera, with the sub-leaflets being prone to extending and overlapping each other in an inconsistent and untidy manner " which tends to give the fronds a "bushy" appearance.

In addition, plants in the far north of the distribution range, that grow close to the edges of normally dry creek beds, have longer and more numerous fronds than plants growing in other locations in the northern sections of the distribution range; and it is probable that plants which grow near some of these creek beds (with their ephemeral water flows) are those, as described by David Jones, with up to 25 fronds. The reason for this north-south variation in plant size is puzzling.

Emerging fronds of M. glaucophylla are somewhat like emerging fronds of L. peroffskyana insofar as they rise almost vertically, with furled pinnae, for a considerable portion of their ultimate length before the pinnae begin to unfurl (See Figure 10).

M. glaucophylla generally has fronds with divided pinnae, with a normal division into two sub-leaflets. A second division is not uncommon and can result in either 3 or (very infrequently) 4 sub-leaflets being formed. 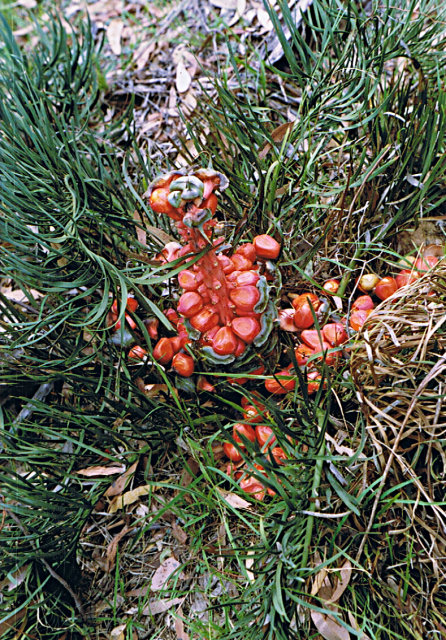 The female cones on M. glaucophylla are the largest of any Section Parazamia species in New South Wales. The coning cycle of this species is irregular. When coning does occur, however, a large percentage of both male and female plants in the thickly populated stands usually participate in the process. After such a coning episode, we saw numerous female plants with two cones; and numerous male plants with up to four cones.

Seeds from the above coning episode were plentiful on the ground near female plants, with the flesh having been removed by kangaroos. Possums are also involved in eating the flesh of the seeds, but they usually take the seed to a nearby tree and, after eating the flesh, drop the seed underneath the tree. Seeds were also sighted with what appeared to be numerous teeth marks, which we concluded were made by feral pigs.

Not withstanding the problems of plant identification and classification, the physical difficulty of locating plants within the Pilliga State Forest is complicated by having to drive on forest tracks that often degenerate into sand drifts (and which can only be traversed, with great difficulty, in a conventional drive vehicle) and, also, by the occasional sighting of feral pigs wandering around within the confines of the forest. The feral pigs add a new dimension to the hazards caused by kangaroos and emus which can suddenly dash across the road in front of you as you are driving along looking for cycads (which can sometimes be completely hidden in the undergrowth). 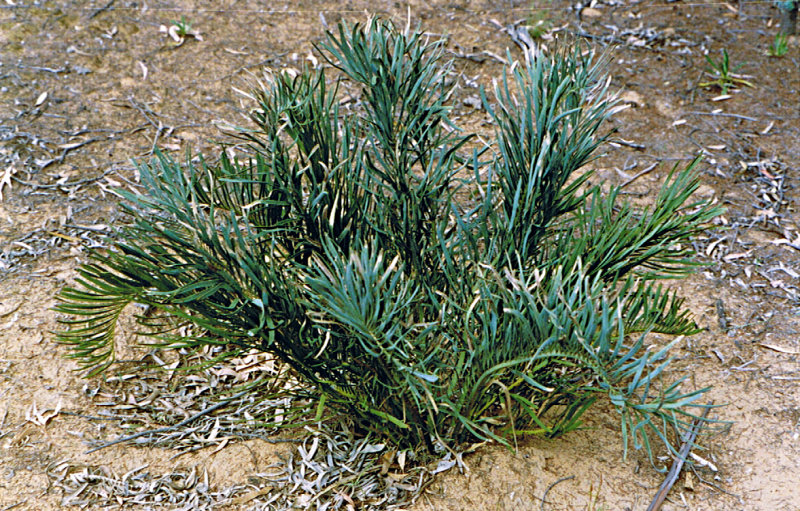 Large-scale bushfires occur periodically in the Pilliga. In 1951 a massive bushfire raged through 350,000 hectares. Huge bushfires (exceeding 100,000 hectares) have since occurred in 1982, 1997 and 2006. Paradoxically, following the 1997 fires, the Pilliga was subject to major flooding.

In respect of New South Wales cycads, prior to the 1998 revision of the M. heteromera complex by David Jones, there were only three named species with divided pinnae M. heteromera and M. stenomera (which are Section Parazamia cycads) and M. diplomera (which is a Section Macrozamia cycad). 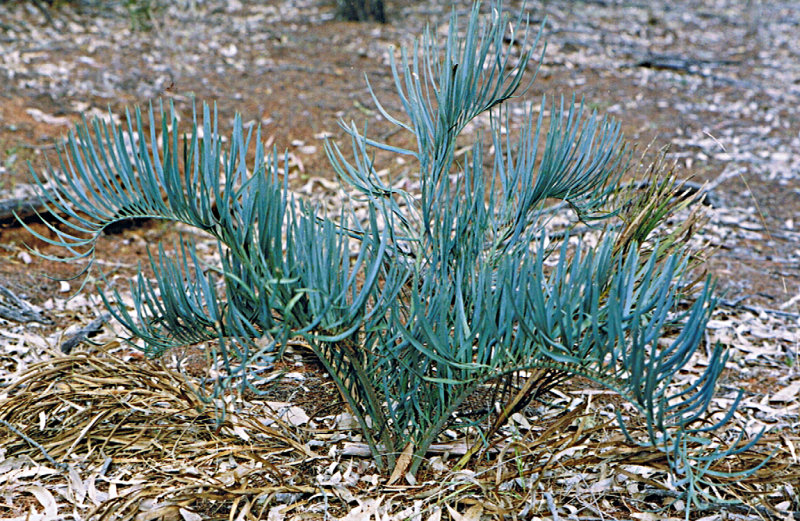 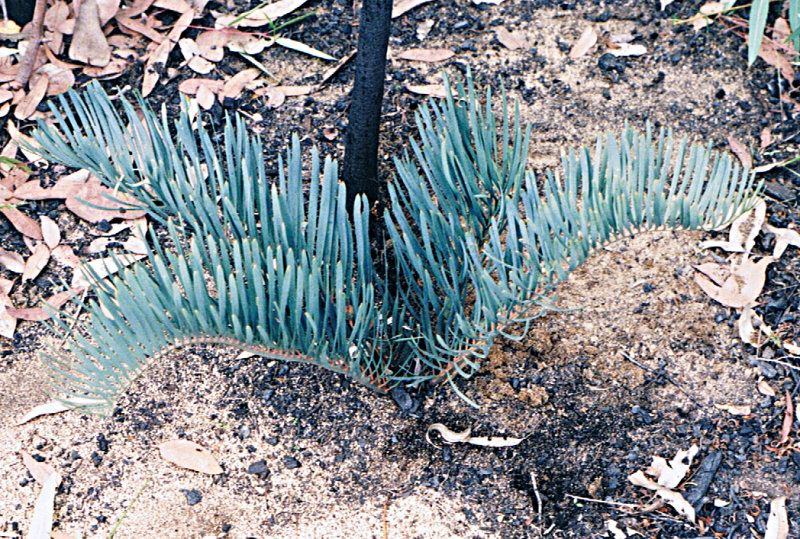 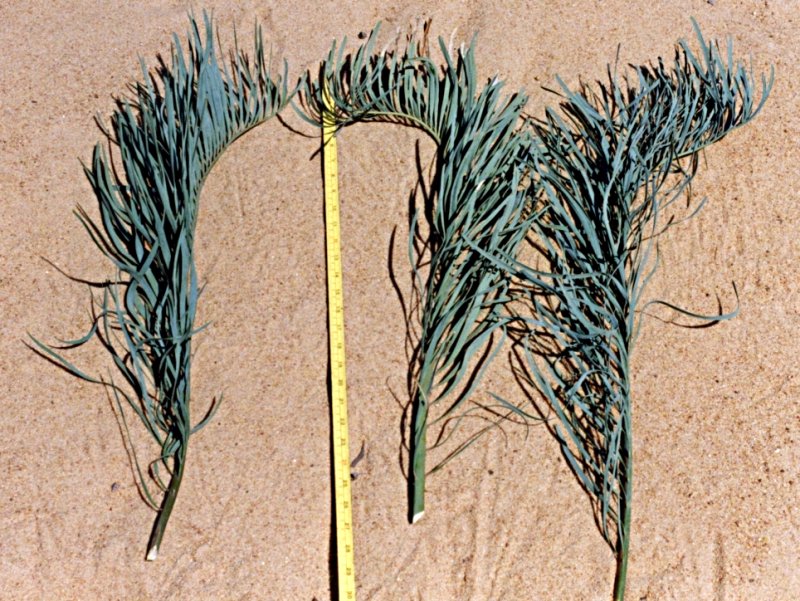 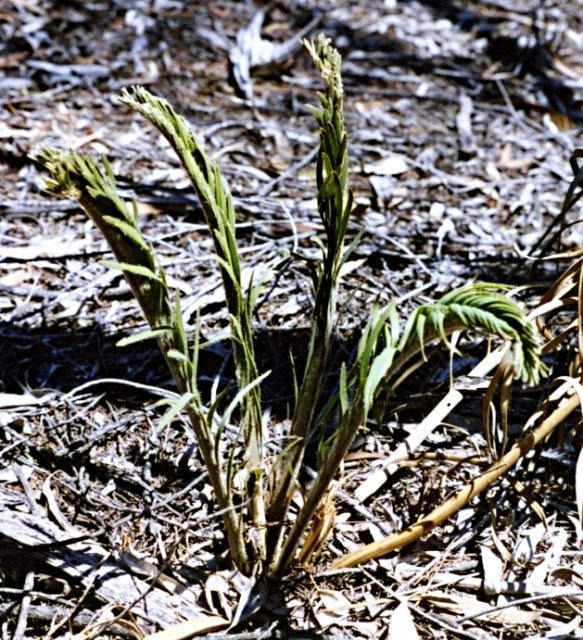 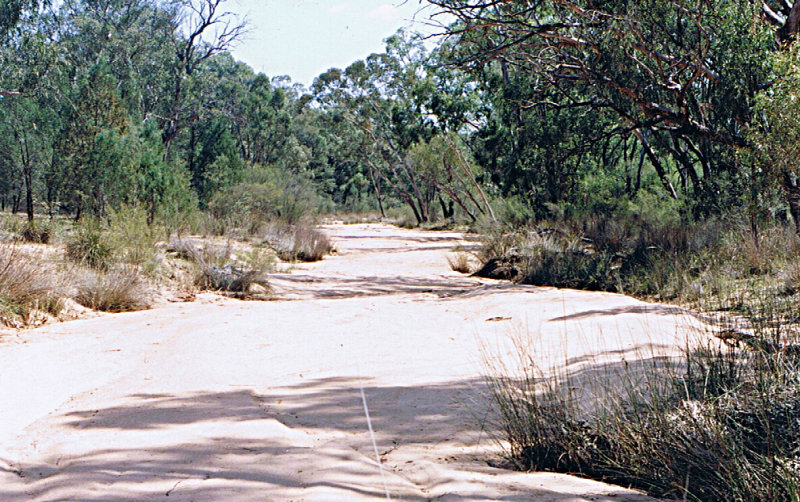 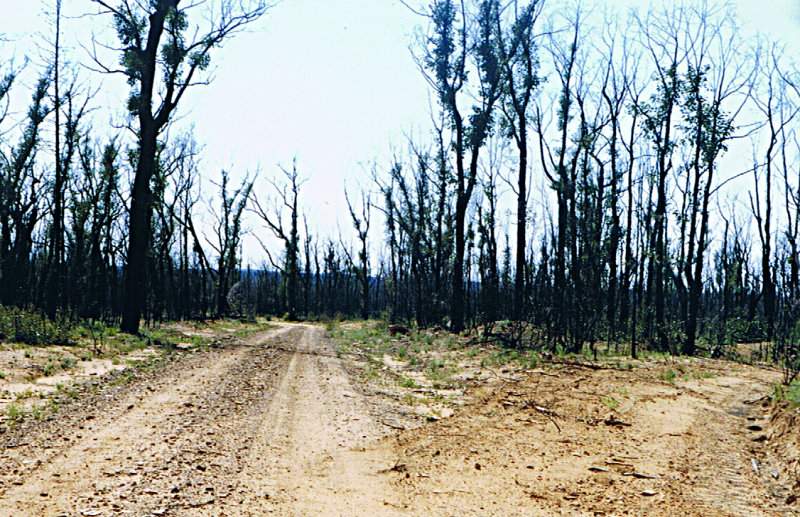 Figure 12. Habitat after of a bushfire.

Craig Thompson and Paul Kennedy (Text & Figures1-12)
Note: This article is part of a major revision of an article by Paul Kennedy about Macrozamia heteromera
that was published in Vol. 59 of Principes minor in November 1992, prior to the 1998 revision of the M. heteromera complex by David Jones.