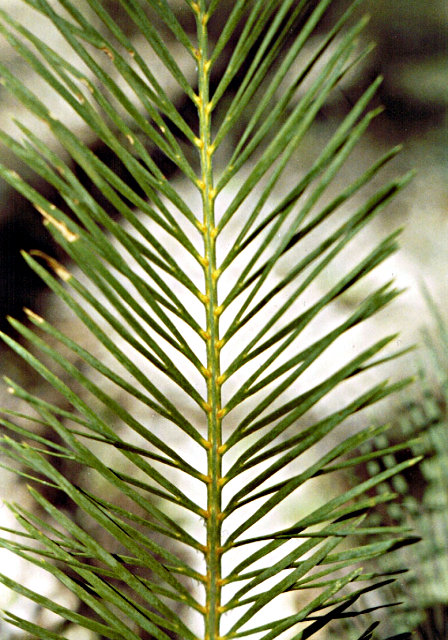 Macrozamia diplomera is a medium sized (Section Macrozamia ) cycad that is endemic to New South Wales. It has a subterranean caudex and normally has fronds with divided (bifurcated) pinnae.

M. diplomera grows in the Pilliga in north-western New South Wales in an area centred around Coonabarabran and extending northward towards Barradine and eastward towards Gunnedah. (For information concerning the Pilliga refer to article on Macrozamia glaucophylla).

Coonabarabran (elevation - 509 metres) has an annual average rainfall of 735 mm (spread over 80 rain days) with winter minimum and summer maximum daily temperatures, reached at least once per week during July and January, of -3.6°C. and 35.9°C. respectively. Frosts occur on an average of 76 days per year. 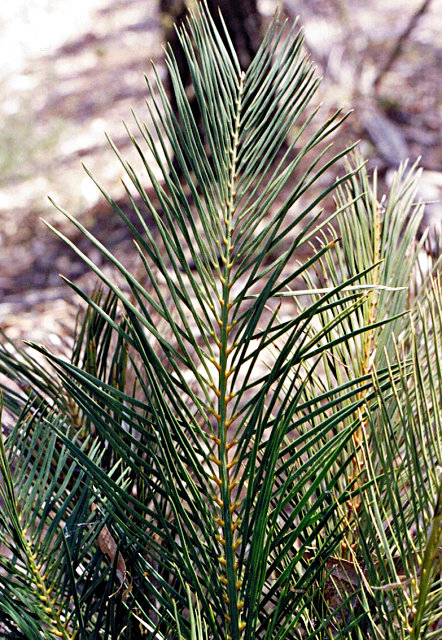 One-third of the annual average rainfall at Coonabarabran falls in summer, with the balance of the rainfall being spread evenly (on a seasonal basis) over the rest of the year. The seasonal rainfall pattern is as follows: Summer: 32%, Autumn: 23%, Winter: 22% and Spring: 23%.

If any enthusiasts familiar with M. reducta were to see a stand of M. diplomera for the first time their initial impression would probably be that they were viewing a stand of M. reducta plants, though a distinct colour variation from the dark green fronds of M. reducta plants to a much lighter pale green would be evident. A reappraisal of the initial identification would quickly follow when a closer inspection of plants in the stand revealed fronds with divided pinnae, thereby eliminating any possibility of identification as M. reducta.

In dealing with cycads, however, one quickly forms the conclusion that the only consistent factor about cycads is their inconsistency. This is certainly true with M. diplomera, as a detailed examination of plants within the habitat range will indicate fronds with three distinct and different types of pinnae. These differing pinnae characteristics, which can often be found in various combinations on the fronds on individual plants in the one stand, are as follows:

(a) those fronds with predominantly divided pinnae (the most commonly occurring type),

(b) those fronds with predominantly entire pinnae, and

(c) those fronds with a mixture of entire and divided pinnae.

Additionally, plants with varying pinnae characteristics can be found growing immediately adjacent to each other, even though the plants can be virtually identical in size and number of fronds. 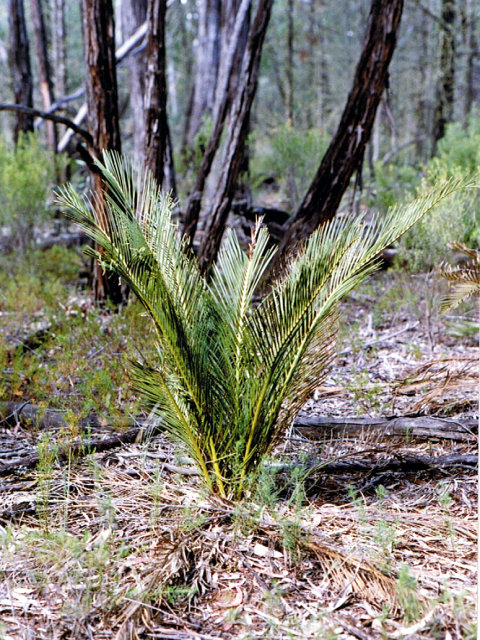 The principal characteristics of M. diplomera are as follows:

The number of fronds per plant varies significantly, with the norm being in the 10 to 20 range, with some plants having as few as 5 fronds and others as many as 30+. The fronds range up to a maximum length of approximately 110 to 120 cm. 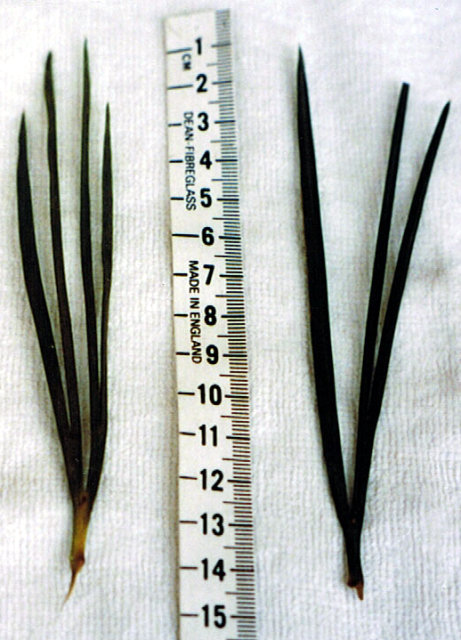 The coning cycle of M. diplomera is very erratic. We have only seen one large scale coning at the various locations which we observed over a 10 year period. Cones are usually solitary, but plants with multiple male or multiple female cones are not uncommon. Seeds can have either red or yellow coloured flesh.

In general terms, M. diplomera seedlings are small and secund and appear to resemble Section Parazamia seedlings, more so than a Section Macrozamia seedling. They are extremely slow growing.

M. diplomera appears to hybridise naturally with M. polymorpha in areas where the two species grow in close proximity to each other. One possible, and feasible, explanation for this mingling of species is that seeds of M. diplomera and M. polymorpha have been dispersed by emus, which are thought to be attracted to the brightly coloured flesh on Macrozamia seeds, as evidenced by our sighting of fleshless cycad seeds in animal (emu?) droppings in a stand of M. diplomera plants.

The above conclusion is supported by the personal observations of a lifelong resident of the Pilliga who commented that emus are regarded as being responsible for spreading seeds of Native Peach trees (Santalum acuminatum ), commonly known as Quandong trees. Emus swallow the entire reddish coloured Quandong fruit and subsequently excrete the seeds during their lengthy daily travels. If the above premise is correct, it is conceivable that the hybridization of M. polymorpha and M. glaucophylla may occur in other parts of the Pilliga.

One peculiar characteristic of M. diplomera is that some plants have a 1.2/1.5 metre long whip-cord like tap root, extending straight down from the base of the caudex into the sandy soil in which they grow, quite possibly as a means of drawing extra moisture from the sub-layers of the soil.

Although M. diplomera normally has an unbranched subterranean caudex, we have seen one plant which was growing in a road-grader formed earth bank on the side of a dirt road which had 3 separate heads (of fronds) at ground level and two underground suckers with emerging fronds. The fronds on this plant (which had obviously been damaged in a road grading operation) were substantially smaller than normal fronds. It is also interesting to note the comment by David Jones in Cycads of the World (Second Edition) that: Macrozamia diplomera is a distinctive species readily distinguishable by its numerous obliquely erect leaves that give the crown the appearance of a shuttlecock.

This species, not M. heteromera as suggested by some writers, was responsible for a stock poisoning episode near Coonabarabran in 1929, in which approximately 2,200 sheep died, reportedly as a result of eating seeds from disintegrating cones (though some observers now believe that the poisoning may have been caused by sheep eating fronds on the plants, during a period of drought).

On an affinity basis, M. diplomera is closely allied in size and general appearance to M. reducta plants which grow in the Newcastle-Cessnock area. Identification of the two species is, however, relatively simple as M. reducta has entire pinnae, whereas M. diplomera normally has divided pinnae. M. diplomera is readily distinguishable from other New South Wales species with predominantly divided pinnae ( M. glaucophylla , M. heteromera and M. stenomera) because of its size and number of fronds, its initially upright and straight rhachis and its pinnae which extend horizontally in a flat plane from the rhachis. 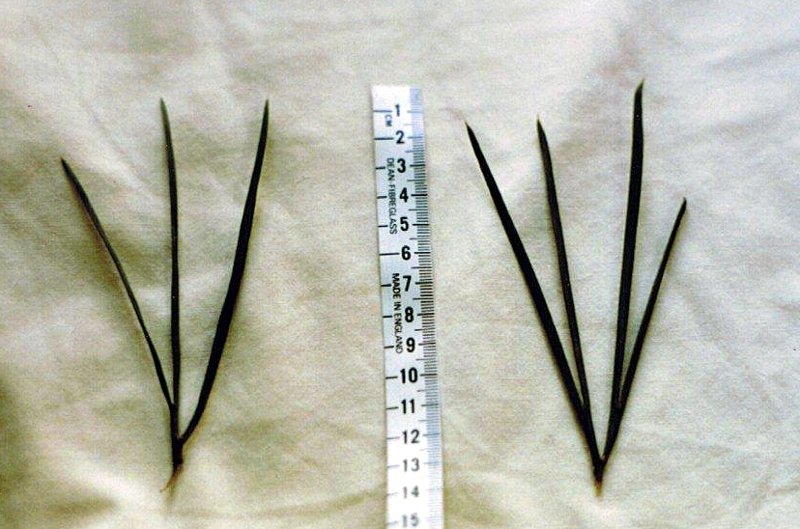 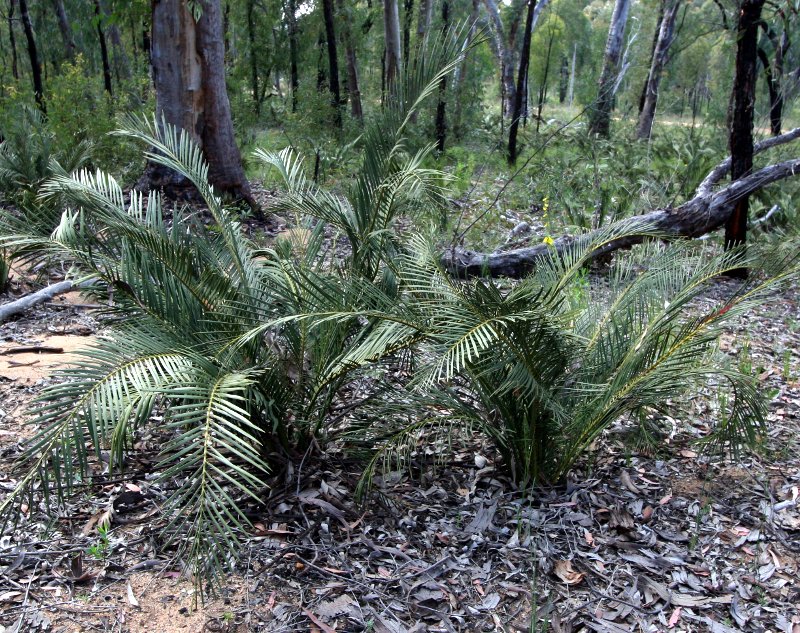 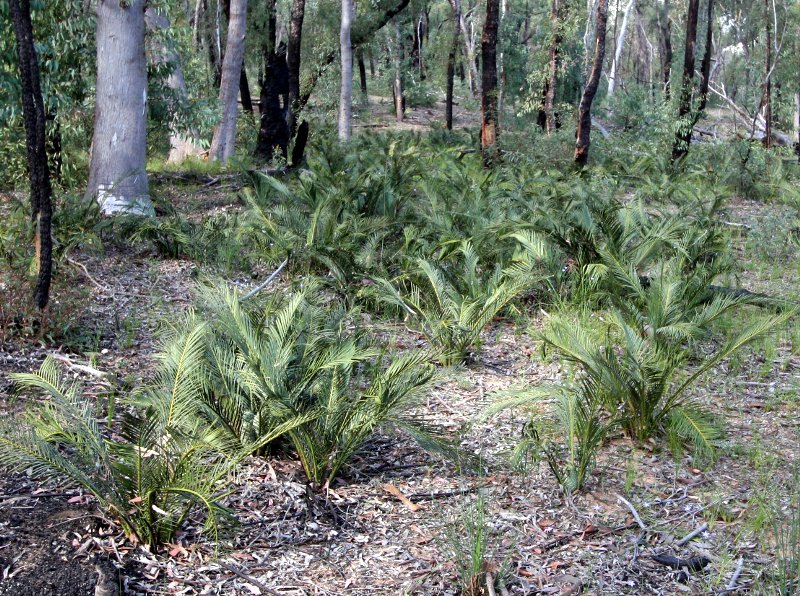 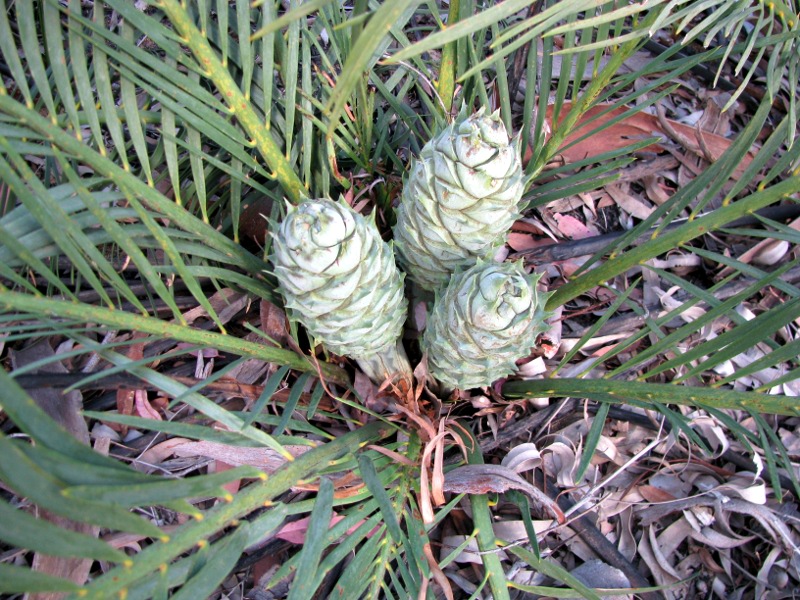 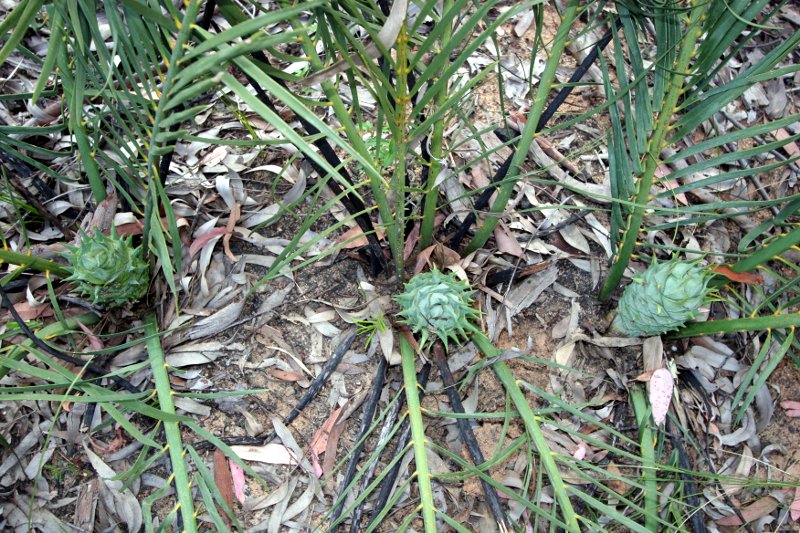 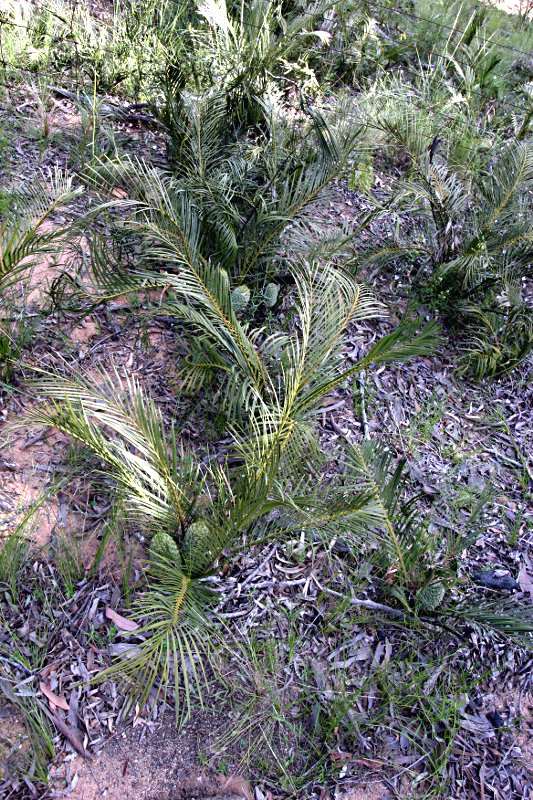 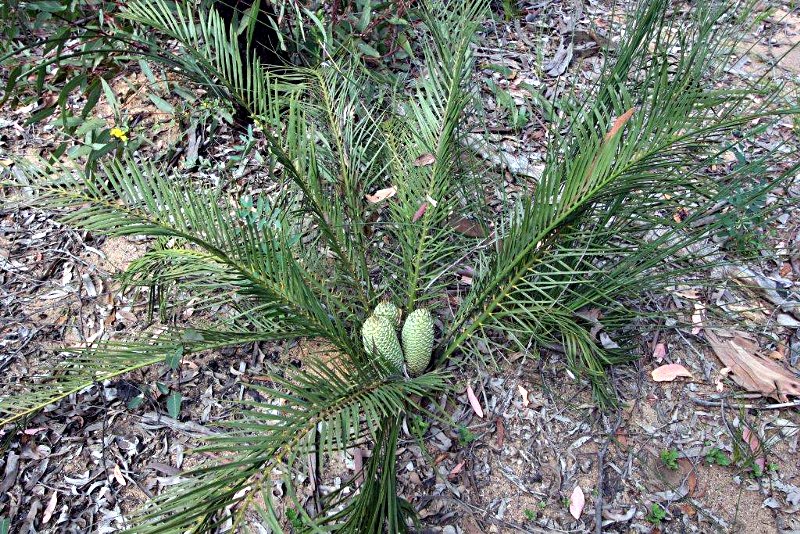 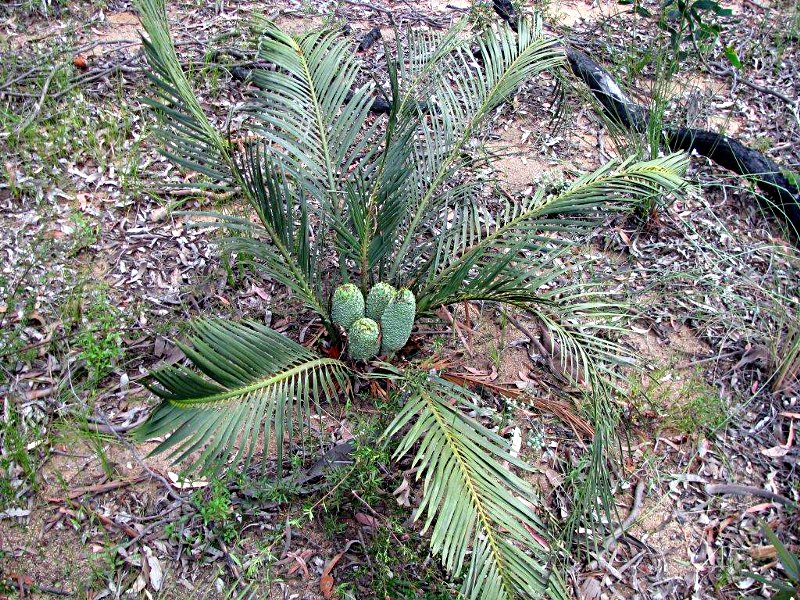 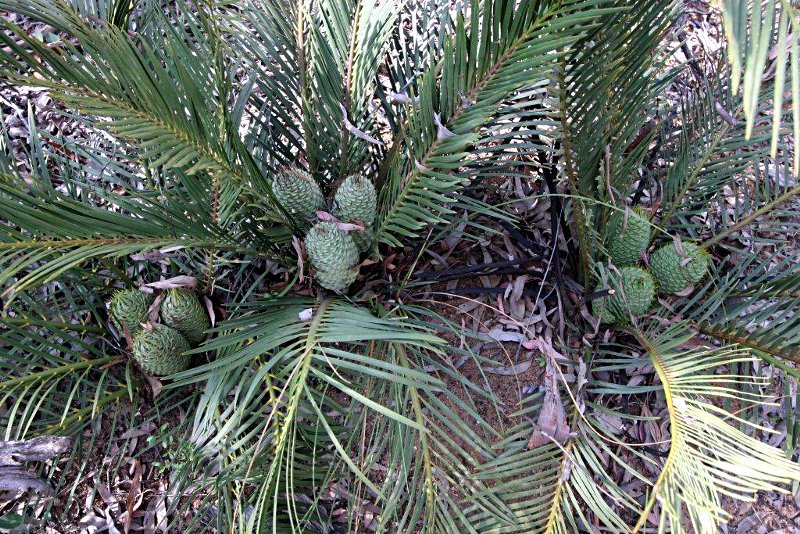 Figure 14. 3 plants of M. diplomera each with 3 with male cones. 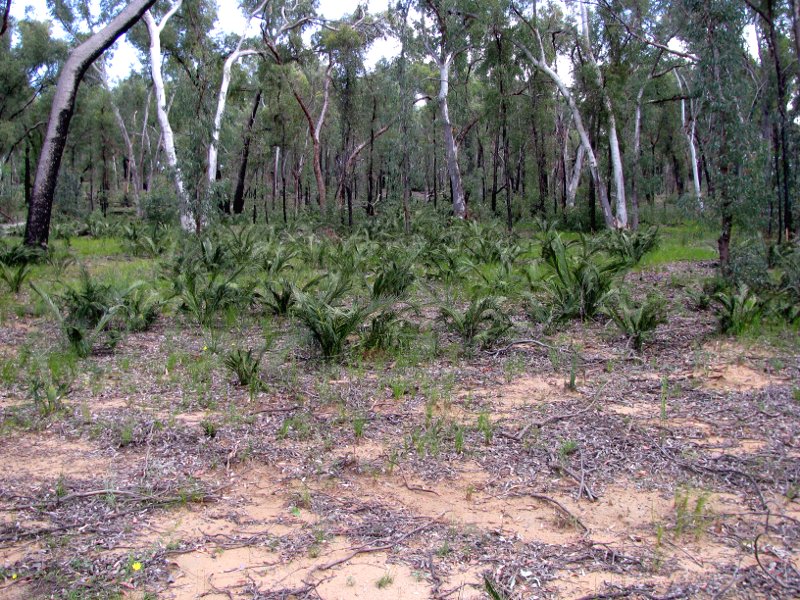 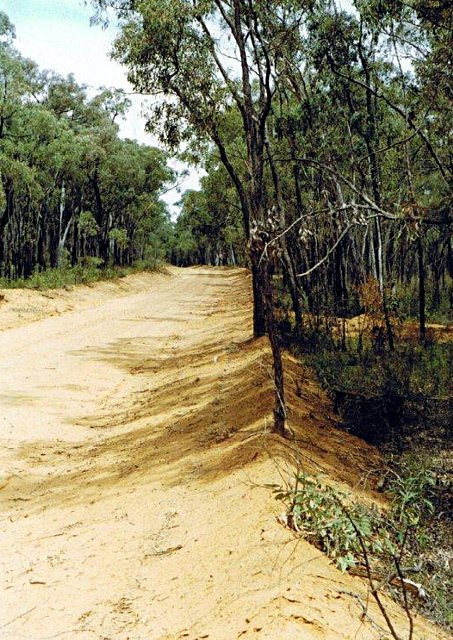 Craig Thompson and Paul Kennedy (Text and all Figures)
(Note: This is a revised version of an article written by Paul Kennedy that appeared in Issue No. 55 of Principes minor in March 1992).