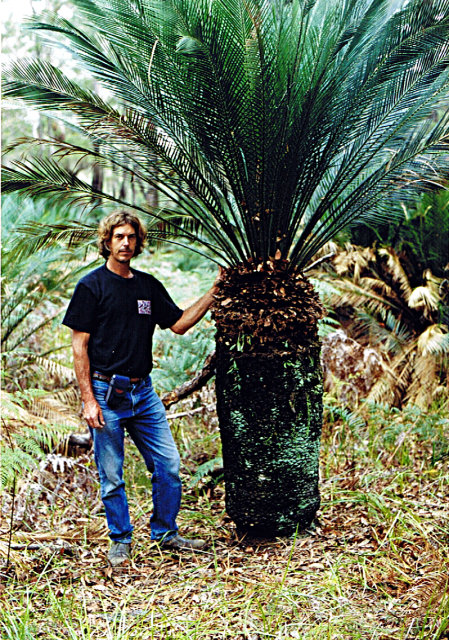 Macrozamia communis is a large (Section Macrozamia) cycad that is endemic to New South Wales. It can have either a subterranean caudex, an aerial extension of the caudex or a short columnar trunk.

M. communis was described and named in 1959 by the late Dr L. A. S. Johnson (a former Director of the Royal Botanic Gardens Sydney) because of its habit of growing in large communities. 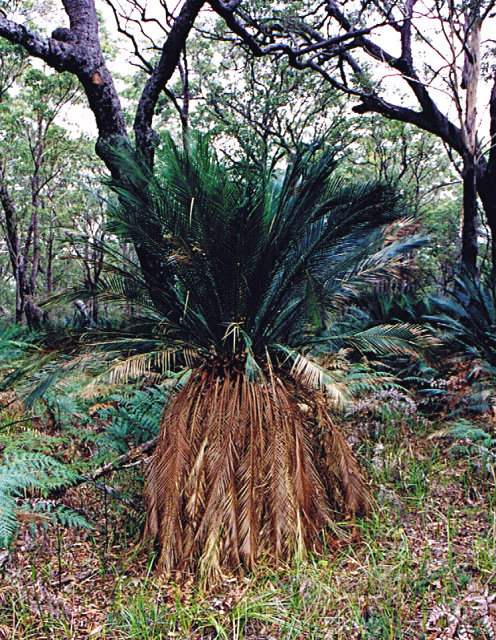 M. communis grows prolifically, in some areas abundantly, on the south coast of New South Wales and to a slightly lesser degree on the central coast, north of Sydney. M. communis reaches its maximum population density on stabilised sand dunes in close proximity to the ocean. It also grows in dense stands on steep hillsides and slopes of near coastal ranges. M. communis grows in areas of woodland, open forest or tall open forest. On the south coast it grows principally under a canopy of Corymbia maculata (previously Eucalyptus maculata); where C. maculata (the "spotted gum") is present, M. communis is normally the dominant understorey plant, although scattered Banksia sp are often present. On the Central coast, the principal canopy cover is provided by Angophora costata (the "Sydney red gum").

As a general rule (thought this is not an ironclad rule) M. communis usually forms a subterranean caudex on coastal sand dunes (due to the action of contractile roots), whereas in shallow soils and on quartzite and sandstone ridges it tends to form an aerial extension of the caudex or a short columnar trunk.

Despite the above comment, however, the old adage that the only consistent factor about cycads is their inconsistency applies to this species, as trunked specimens are common in some stands that have formed on coastal sand dunes. Near Batemans Bay on the south coast, M. communis is ubiquitous and can be found growing in numerous dense and extensive stands. There are literally thousands upon thousands of plants growing within a 20 kilometre radius of Batemans Bay (albeit that many stands have been decimated in the name of progress to make way for homes, farms or tourist developments). 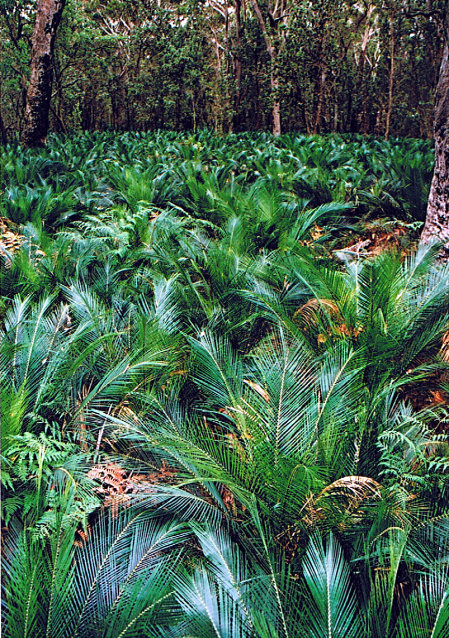 In some dense stands on the south coast of New South Wales, M. communis grows in such abundance that, in order to move through a stand, it is necessary to force your way through the overlapping fronds of numerous closely growing plants and simultaneously protect your eyes from the sharply-tipped pinnae (on fronds which can reach up to 2.4 metres above ground level, from a subterranean caudex).

The density of plants in some of the above stands is such that the ground is often totally obscured by the multiple layers of fronds and it is virtually impossible to see where, or on what, you are treading as you move, with great difficulty, through the crowded plants. No other cycad in New South Wales (or to our knowledge in Australia) has a population density of the same magnitude as M. communis. In this respect, despite the fact that we have described Lepidozamia peroffskyana as growing "in abundance" with "adult plants growing so prolifically that the fronds of numerous plants growing very close together actually overlap each other", the population density of M. communis in certain areas on the south coast of New South Wales far exceeds the density of the most populous stands of L. peroffskyana that we have seen.

M. communis increases significantly in size as it moves southward. Not only does the overall size of the plants increase but there is a corresponding increase in the size of both cones and seeds. We have been advised by Keith Boyer, a New Zealand cycad enthusiast, that plants grown from seed collected near Batemans Bay grow much better in the temperate climate of New Zealand than plants grown from smaller seeds collected from smaller plants near Gosford (on the central coast). 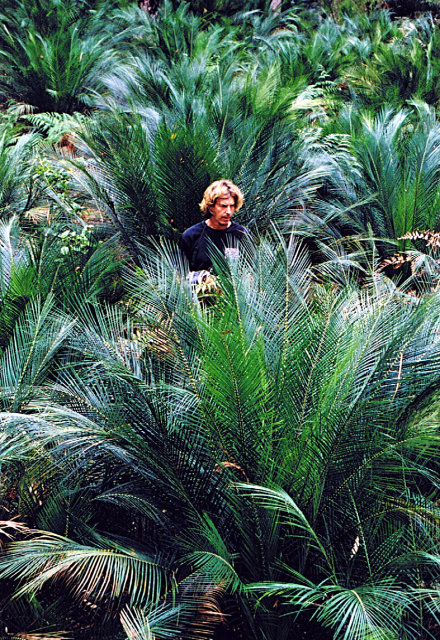 Climatic information relating to Taree, Sydney and Bega and covering altitude, annual average rainfall, number of rain days and frost days per year and minimum and maximum temperatures reached at least once per week in July and January, respectively, is as follows:

The annual rainfall covering the overall distribution range of M. communis falls in a very uniform pattern with 50% falling in spring and summer and 50% falling in autumn and winter. The percentage seasonal rainfall pattern is as follows: Summer: 28%, Autumn: 28%, Winter 22% and Spring 22%.

The principal characteristics of M. communis are as follows: 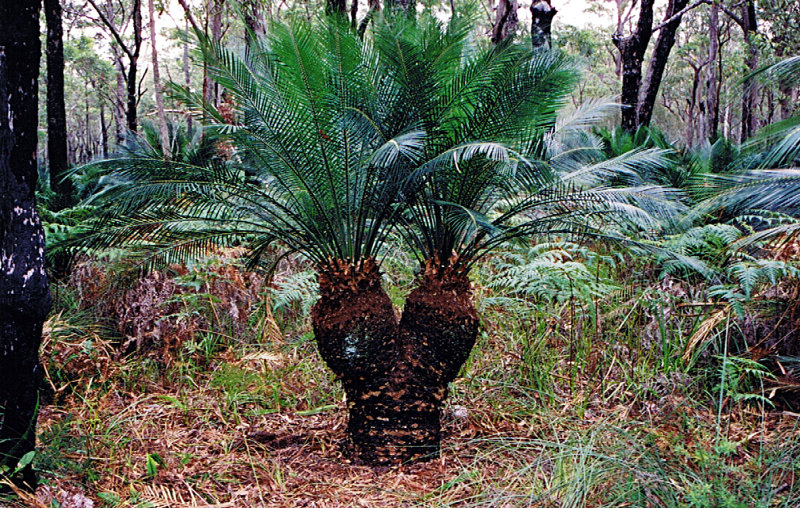 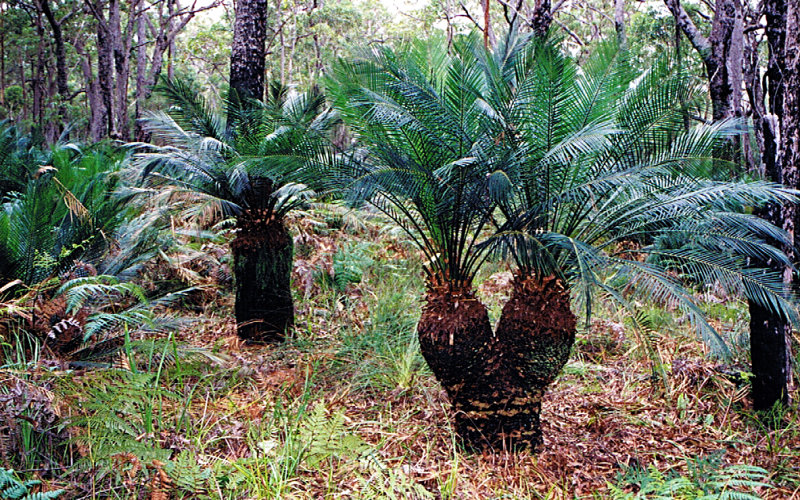 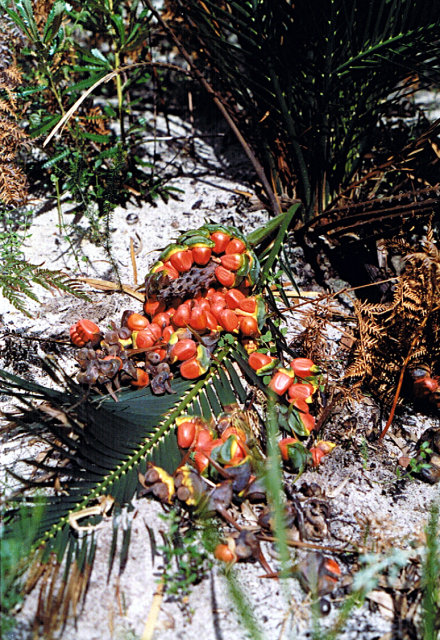 When a trunk is produced it normally reaches up to (and rarely exceeds) a height of 1.2 metres above ground level and measures up to 0.6 metres in diameter. This height range accords with an extensive 1939 study by Brough and Taylor into the life cycle of M. communis (which was then known as M. spiralis) though we have sighted one M. communis plant with a trunk that stood 1.5 metres above ground level.

M. communis does not sucker and normally only produces a single trunk, though we have seen two only plants with bifurcated trunks.

M. communis can have up to 100+ fronds which can reach up to 2 metres in length and which, at first, stand more or less upright but then, with age, tend to spread in a graceful arching manner to produce a palm-like appearance though plants are often seen in suburban Sydney with the fronds tied in a tight bunch, presumably to facilitate lawn mowing and allow ease of movement around the plants (by avoiding the sharply-tipped pinnae).

The flesh on M. communis seeds is normally reddish coloured, though occasionally yellow seeds are produced: but in some dense stands on the central coast it can either be red or yellow or, sometimes, an (intermediate) orange colour. Plants producing seeds with different coloured flesh can be found growing side by side in the above stands. Red coloured seeds predominate, with yellow seeds being reasonably plentiful but with orange seeds being less common. 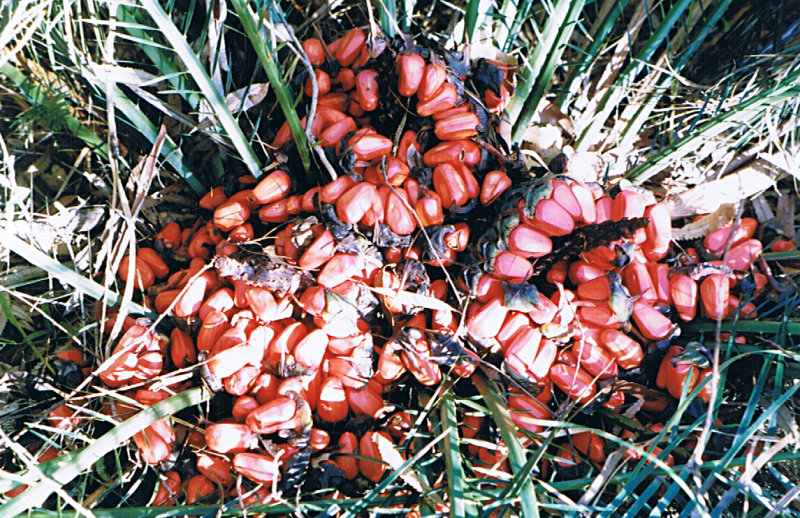 Figure 8. M. communis with 3 disintegrating cones in crown of female. 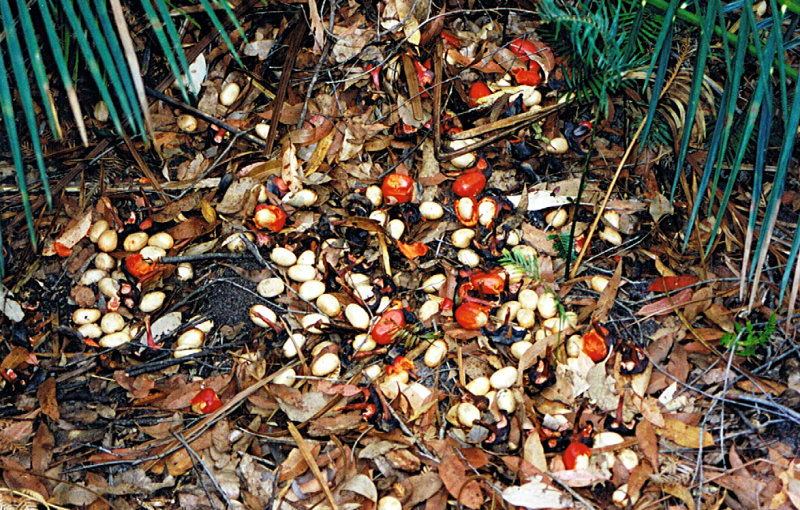 Figure 9. M. communis seeds at base of female plant (mostly with flesh removed by kangaroos).

M. communis seeds measure up to 3.5 cm in length and 2.2 cm in diameter. The sporophylls on female cones are heavily spined, with an elongated spine measuring up to 7 cm long on those sporophylls which are located toward the apical section of the cones. Male plants normally produce more cones than female plants and up to 10 male cones on a plant have been recorded, though the norm is in the 3 to 5 range. Male cones measure up to approximately 40 cm long and 12 cm in diameter and are also spined, with spines measuring up to 5 cm on the apical section of the cones.

In 1985, we took (the late) Cynthia Giddy, who was visiting Australia for the first time, to Batemans Bay to look at M. communis. Cynthia was amazed at the prolific number of M. communis plants which were growing in the area, particularly in one stand which was situated on a flat area of stabilised sand very close to the sea shore.

Cynthia was also surprised at:

Kangaroos and possums are fairly common over the entire distribution range of this species and are responsible for eating the flesh off seeds which they have taken from (or which have fallen from) disintegrating cones. In this regard, these marsupial animals are very efficient seed cleaners. 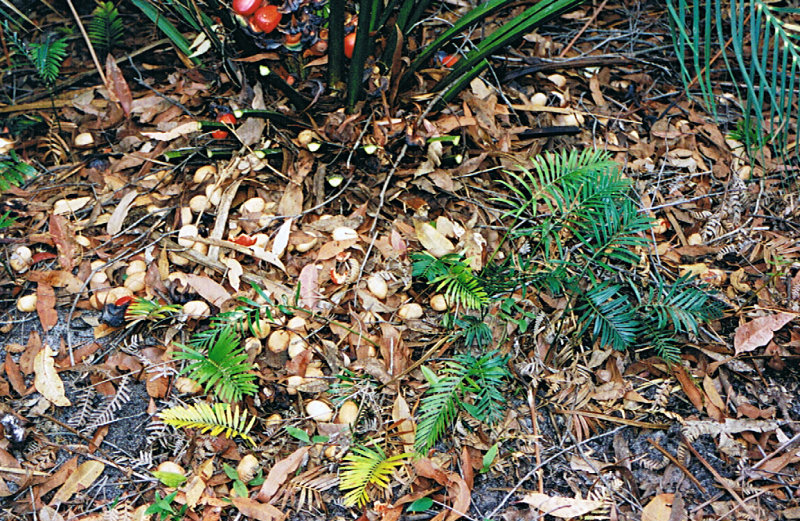 Figure 10. M. communis seeds and young seedlings at base of female plant. 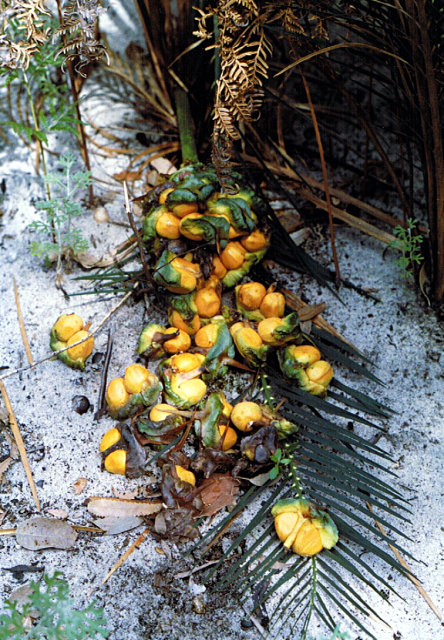 In respect of New South Wales cycads, M. communis has a very close affinity with M. montana and a lesser relationship with the very much smaller M. reducta.

Confusion has occurred, in respect of the identification of M. communis and M. spiralis, despite the reclassification of the nomenclature of Australian Zamiaceae by Dr L. A. S. Johnson in 1959, when M. communis was created to cover what was previously incorrectly known in New South Wales as M. spiralis.

Compared with M. communis, M. spiralis is a small cycad that grows in a pattern of scattered individual plants or, sometimes, small clumps of plants. It normally has between 2 and 12 fronds, which stand up to 60 to 90 cm above ground level and has absolutely no affinity with M. communis. 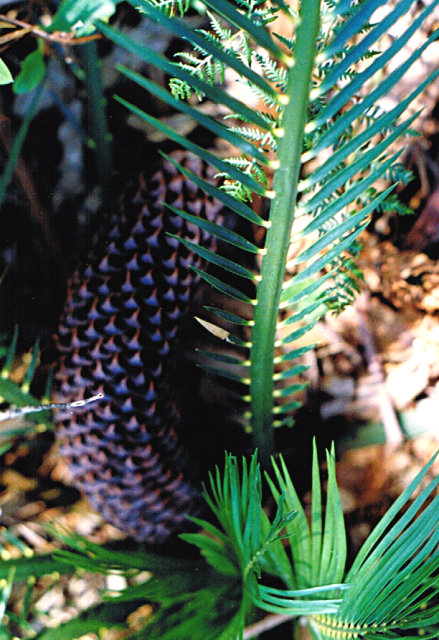 Figure 12. M. communis male cone + pinnae reduced to spines at the base of a frond. 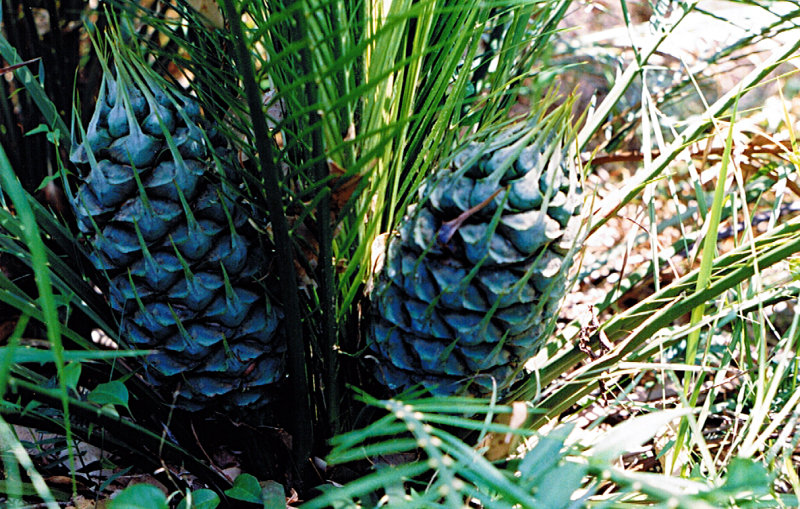 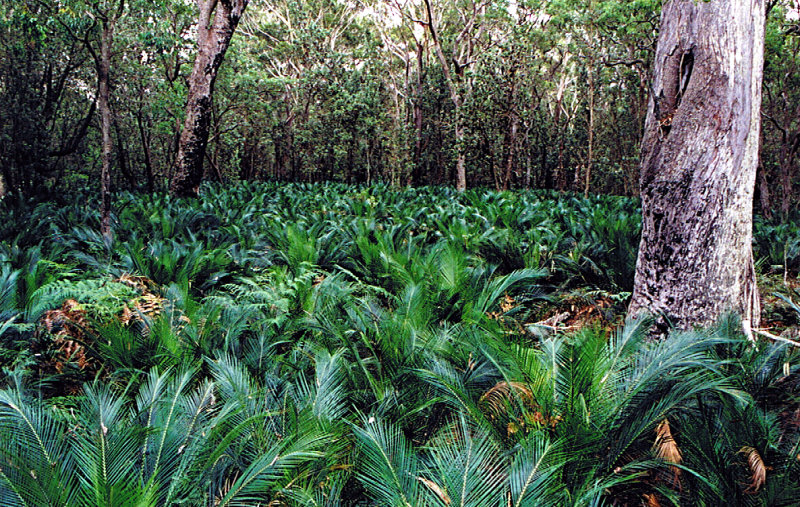 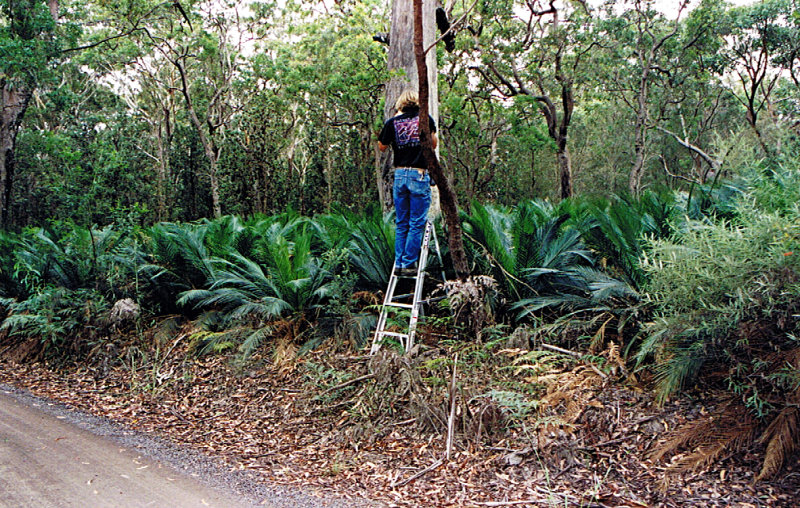 Figure 15. Getting that shot.

Craig Thompson and Paul Kennedy (Text & Figures 1-15)
(Note: This article is a revised version of a previous article written by Paul Kennedy that appeared in Vol 60 of Principes minor in January 1993 and in Vol 41 of Palms & Cycads in October-December 1993.

The article takes into account the 1998 revisions of the Macrozamia communis complex (by Ken Hill and, separately, by Ken Hill and David Jones), which resulted in the segregation of and creation of two new species: M. montana and M. reducta