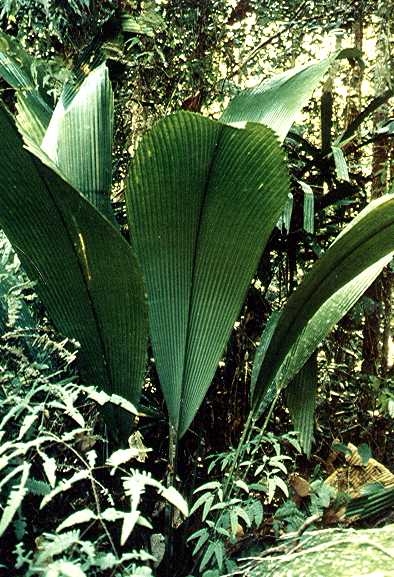 A medium sized, trunkless palm with large, simple, undivided leaves that can be up to 6m in length, coming directly from an underground rootstock. These large, leathery, diamond-shaped leaves are pleated along their length, and have serrated edges.

Warm, sheltered well drained position. Surprisingly cold tolerant given their tropical origins. Very sensitive to root disturbance; be exremely carefull when potting up, or planting out. They are easily killed by careless handling.

Sometimes the reality of actually seeing what we have been reading, and perhaps seen pictures about, has an impact beyond the wildest expectation. After all, reality is the ultimate make-believe. A few years ago I had the pleasure and the discomfort of walking about the rainforest of southern Thailand near the Malaysian border. It is the sort of jungle which, on the Malaysia side of the border, gets cleared and replaced with the Oil Palm, Elaeis guineensis, and, on the Thailand side, with the Rubber Tree, Hevea brasiliensis. One of the many palms growing in this area I had particularly come to see was Johannesteijsmannia altifrons which previously I could only admire in a few old black and white photographs. 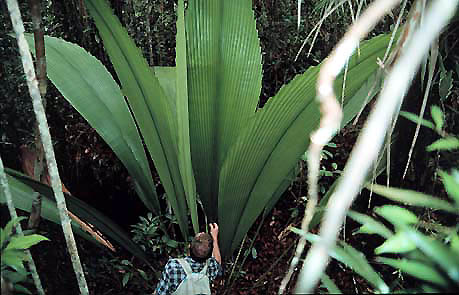 We walked for a long time through rubber plantations, through freshly cleared rugged areas and to the edge of the forest where felling of trees and burning was in progress and then through maybe 5 or 6 kilometres of virgin unmolested forest resplendent with lush vegetation, wetness, leeches and humid heat. Walking along stopping here and there to admire the many special sights we finally got there for, coming around a bend of a steep mountain slope, we saw a not so densely wooded area full of Johannesteijsmannia palms. The first feeling upon seeing these magnificent plants was one of awe; but, also, a feeling of seeing something perhaps like a dinosaur that does not belong in our time anymore: a relic of times long past. The leaves of J. altifrons measure from a trunkless bottom to a top of 4 to 5 metres diamond-shaped simple leaf of which more than half is pleated: a truly magnificent sight! 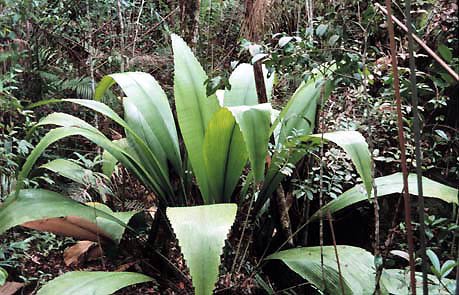 Generally, palms and other plants in the wild are often chewed, frazzled and soiled giving a messy appearance. J. altifrons, however, can at times look almost untouched by the elements, aloof and majestic like a symbol of an era gone. I felt very privileged to have seen these still living "dinosaurs" and the question arose, looking at these plants, is whether there will be any such wonder left for our next generations or will we soon have traded such a wonderful sight for new car tyres? 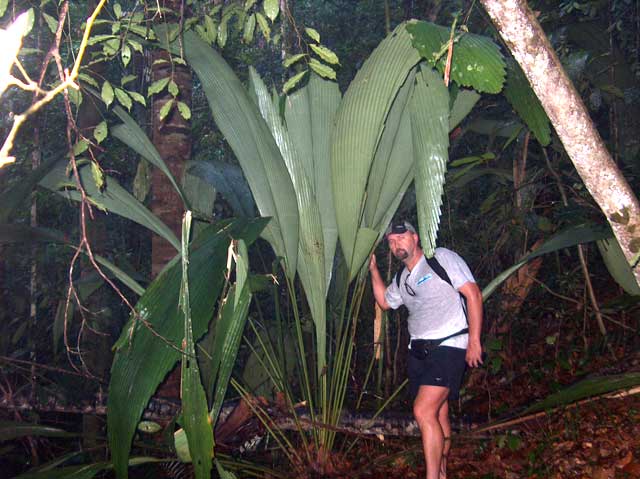