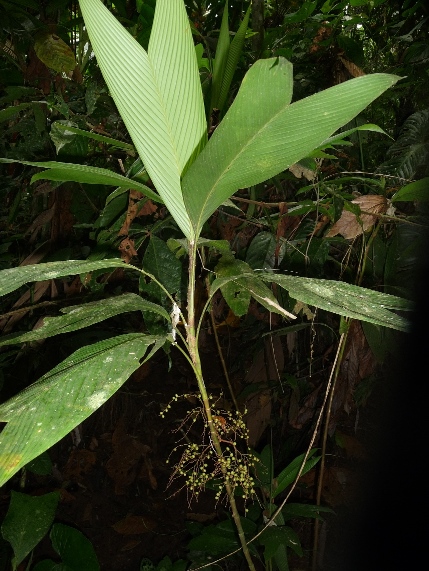 G. tenuissima is restricted to a few isolated peaks that rise out of the coastal lowlands of Ecuador within half a degree north and south of the equator. It is found at elevations from about 450m to 700m on steep slopes in wet premontane rainforest. Only three sites have been recorded: the first was on a ridge about 50km south of Santo Domingo known as Montañas de Ila, the second site was a hill just outside Santo Domingo and the other is on the range of Machi-Chindul east of Muisne. Because of its very restricted distribution it has been classified as Critically Endangered (CR)

This is a small clump-forming palm from the understorey of moist rainforest. Leaves are palmate: Blade is bifid, up to 40cm long and 16cm wide with extended drip-tips of 4-8cm long. Surface is finely corrugated but without any raised veins above or below. Petiole is from less than 1cm to 6cm long. Stem is 8-15mm in diameter and 2m to 3m tall with pronounced leaf scars and up to 10cm long internodes, they are smooth and cane-like, starting leaf-green and gradually aging to a yellow-brown tone. In the gloom of the forest floor it may have only three to six stems but on the edge of clearings or in cultivation may have more than twenty, more closely clumped as light conditions brighten. Inflorescences arise on bare stems, are three-order branched being 4mm/2mm/1mm wide at each level, baring small orange flowers of 0.5mm diameter and spherical fruit 5mm diameter, blue on ripening. 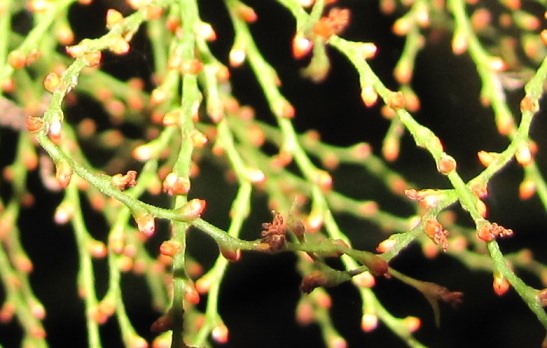 This palm is very adaptable to the garden in areas where the temperature rarely drops below 10 degrees Celsius and soil and air dryness is moderate in the driest months or preferably with permanent moisture. Its low clump-forming habit, elegant bifid leaves and unusual flower/fruit colours offer appeal as a patio or shaded garden plant or perhaps for indoors. 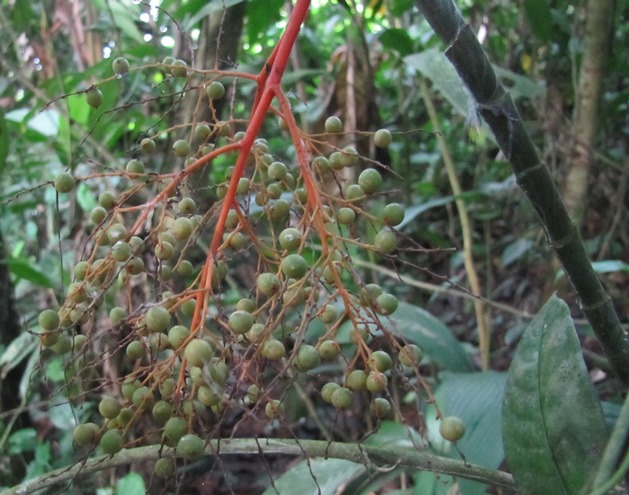