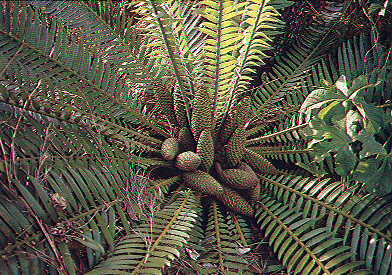 This cycad has been recorded as growing in several localities in both Southern Sudan and Northern Uganda. The colony that we visited was at Moyo in Northern Uganda, close to Sudan's southern border. Interestingly, the colony occurs less than 100 kms. from the newly described E. macrostrobilus in the Madi district in the far north of Uganda.

Up to 2. 5 m in height, branching at the base and 75 cm. in diameter. These plants form clumps much less frequently than other Ugandan cycads, and t find more than 3 stems in a clump was ur common. Many of the older stems had bee burnt by frequent fires.

The leaves are mid green 1.5-2 m in length and the leaflets contain a few small spines on each margin.

The male and female cones we saw, emerged a yellow green colour and became more brown as they maturei Female plants can produce up to 4 cone, while male plants sometimes produce 12-15 cones. 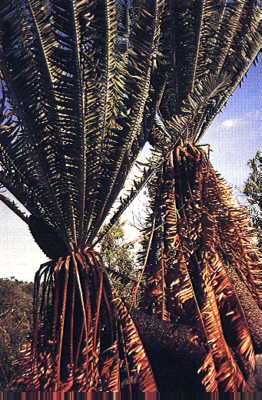 The main cycad colony we visited consisted of about 200 mature plants, however there are several other colonies around the town in the hills and this cycad is relatively common in the area, and does not appear be endangered in any way. Thie climate is hot and dry and the plants grow on low hills amongst granite boulders in full sun. This is a medium sized cycad which has adapted to the harsh growing conditions. Regular fires in the area have blackened many of the larger stems. Limited seedling regeneration takes place because of the hot dry conditions and the frequent grass fires. Sometimes the mature plants become deciduous for a time and rarely do they carry their leaves for a second season. The dead leaves hang down a form a skirt.

This cycad grows well in cultivation. As a seedling, it often loses its previous year's leaves before the new leaves emerge. The seedlings need plenty of room for the tap root to develop and require very good drainage. It will grow in partial shade, however best results are obtained growing the seedlings in full sun. They do best in a tropical or sub-tropical climate. They are unlikely to be bothered by cold, however heavy frosts would probably be fatal. 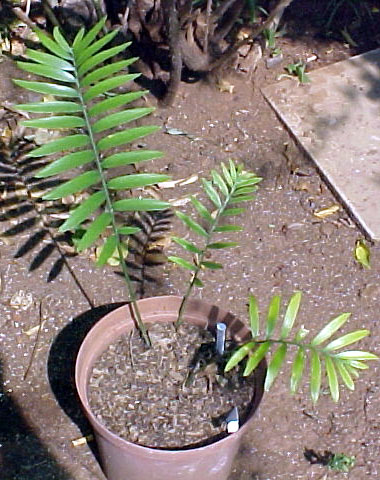 An excerpt from The Cycads of Central Africa, by Peter Heibloem, Cycad Gardens.