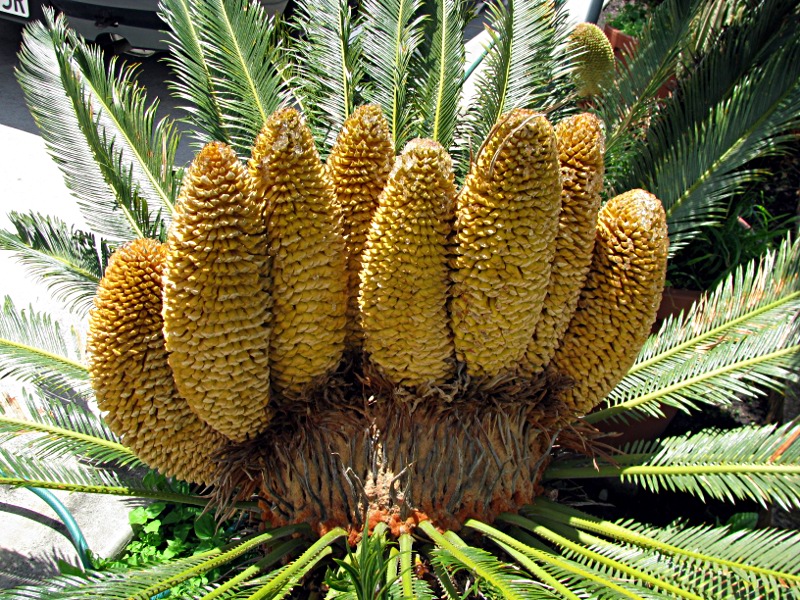 Cycas revoluta is undoubtedly the best known and most popular cycad in the world. Despite this, not much has been known until recently about the wild populations. Last year, the authors published a comprehensive account of the species (Osborne & Tomiyama 1995). Several hundred thousand specimens of Cycas revoluta occur in a scattered distribution pattern from the southernmost part of Kyushu and throughout the Ryukyu Islands, mostly growing on near-vertical coastal cliffs (Figure 1) or on the sides of limestone mountains. plants on near-vertical coastal cliffs near Kogashima, southern Kyushu towards the northern end of the species distribution range. The mountain in the background is Kaimon-dake, a volcano which last erupted in the 9th Century. Photo: Takashi Maruoka, in Shukan Asahi Hyakka Sekaino Shokubutsu , December 1977.

The Japanese people have a special empathy for this plant, extending back over many centuries, and both wild and cultivated representatives of the species comprise an intimate part of Japanese culture.

Of particular interest is the diverse range of cultivars much favoured by Japanese horticulturists but not well-known outside Japan. A description of these fascinating and often bizarre forms was given by Toshihiko Satake (Satake 1981).

Cycas revoluta var. cristata (Japanese: tosaka, shishi-sotetsu, mayaa-sutichi or mayaa-sotetsu ). This is a rare form having a laterally-spreading trunk apex so that the stem becomes two-dimensionally fanshaped, like a cockscomb. It is particularly dramatic when this development extends in the same way to the production of crested line of male cones (Figure 2). The origin of the crested form is uncertain; it may be that damage to the meristematic region causes the abnormal cell proliferation. Plants with this aberration are sometimes found naturally in sites where typhoon damage is experienced, while in other cases they are obtained as suckers from "normal" plants. of Cycas revoluta at the Shenzhen Fairy Lake Botanical Garden, Guangdong, China. Photo: Ding-yue Wang.

Cycas revoluta var. diplofoliolum (Japanese: matsuba-sotetsu ). In this form some or all of the leaflets are dichotomously forked (bifid) from a point about halfway along their length or closer towards the tip. The percentage of bifid leaflets increases towards the petiole and occasionally the leaf rachis itself is branched. The diplofoliolum form carries its mutation genetically, i.e. seeds from bifid-leaved parent plants will also bear bipinnate leaflets. Specimens with a high percentage of bifid leaflets, and those with very prominent forks, are especially sought after by Japanese collectors.

var. corrugata (Japanese: chirimen-sotetsu). This rare cultivar has vertical stripes on the leaf and bract bases, and is often associated with a bottle-shaped lower trunk.

Cycas revoluta var. variegata (Japanese: fuiri-sotetsu ). This is probably the best-known of the cultivars and represents a wide range of plants in which there are various degrees of yellow/green leaf variegation patterns. Sometimes a whole leaf is yellow, sometimes some of the pinnae are yellow and others green, and sometimes the individual pinnae are part yellow and part green. Various mixtures of all these sometimes occur on a single plant, so that each specimen is unique (Figure 3). Seed production from variegated plants gives a large proportion of normal plants together with a much smaller number of albinos and variegated plants; hence propagation of these forms is best accomplished by selecting and rooting suckers which show good colour potential. , in the large collection cultivated by Mr. Masayuki Ishigaki, Ishigaki-Jima, japan.Photo: Masayuki Ishigaki.

Cycas revoluta var. alba (Japanese: shiroba-sotetsu or ougon-sotetsu ). The epithet alba is something of a misnomer as the second Japanese name is translated as the "golden cycad". This is a variation of the variegated form, but in these rare and unusual specimens, the entire crown of leaves is pale yellow on emergence (Figure 4). The yellow colour initially darkens during the summer but later the leaves gradually become green and hence photosynthetically productive. the Cycas revoluta mutants is this specimen which bears great flushes of sulphur-yellow leaves, these later becoming green and photosynthetic. This plant was found on a precipice on Kume-Jima island some 25 years ago, and is now in cultivation in the garden of Mr. Seisyun Itokadzu, Deputy Mayor of Gushikawa-son village, Kume-Jima, Okinawa. Photo: Seisyun Itokadzu.

var. aurea (Japanese: kogane-sotetsu ). In this form, it is only the tips of the pinnae which have a golden-yellow colour. In Amami, these plants have the yellow tips on emergence (Figure 5) and they wither during the autumn. In other examples, the leaves are green on emergence and develop permanent yellow tips subsequently. Cycas revoluta forma aurea from Amami, Japan. In these specimens, the tips of the pinnae are yellow on emergence but become brown as the leaf matures. Photo: Hajime Tomiyama.

Cycas revoluta var. involuta (Japanese: tako-sotetsu ). This is a form in which the leaflet tips remain rolled inwards (i.e. involute) to varying degrees. The pinnae are also entirely covered with brownish hairs which creates a somewhat morbid-looking appearance.

var glabra (Japanese: aoe-sotetsu ). This is an extremely rare form where the back of the leaf, petiole and petiole base is completely glabrous and greenish, the whole plant thus having a very "smooth" appearance.

Apart from these nine cultivars, there has always been an enormous interest in the use of Cycas revoluta for bonsai, especially of course, in Japan (Hodge 1973). These specimens are variously referred to as dwarf Cycas , mini-Cycas or C. revoluta forma/var. nana (Japanese: ryukyu-sotetsu or kumeyama-sotetso (Figures 6 & 7). They cannot be regarded as cultivars in the sense of the nine forms described about, but are in most cases the products of skillful manipulation over decades or even centuries, in the typical and painstaking bonsai art-form. Growth rates are usually limited to about 10 cm in 20 years. Cycas revoluta in the bonsai style. Photo: Hajime Tomiyama.

Cycas revoluta will undoubtedly continue its popularity as a garden and container specimen, but the oddities described in this article add a new and interesting dimension to the species. While a very limited number of such plants have found their way into collections in China, the USA, and Australia, it is hoped that these will become more widely accessible to other collectors outside Japan in due course.

of Japan in habitat on a small island near Okinawa in the Ryukyus. Photo: Hajime Tomiyama. 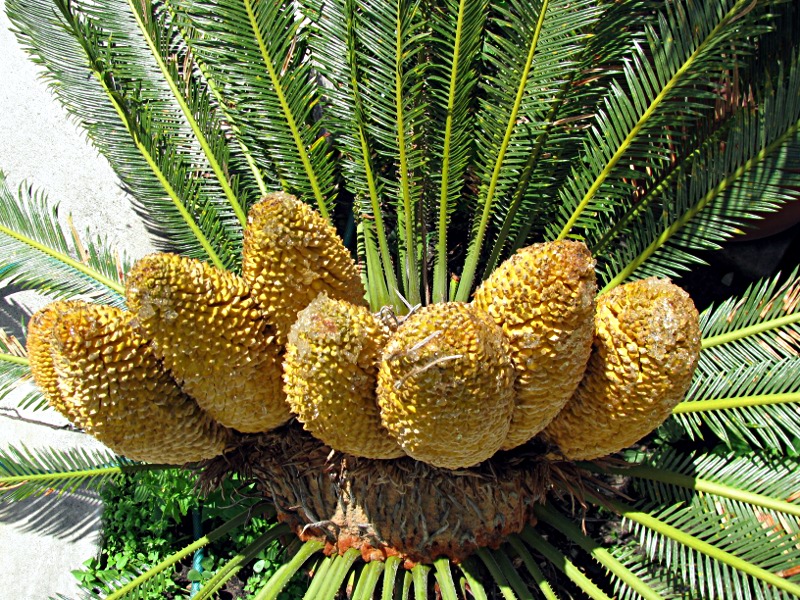 C. revoluta "semi-crested" is similar to the fully crested variety but not being quite there. The fully crested ones have the line of cones all diffused into one another so that it has the profile of a loaf of bread. The phenomenon is well known and it occurs at a very low frequency, less than 0.1 %, but any number would be a wild guess. What causes it? No-one knows - various theories have been put forward about insect attack at the early stage before the cones emerge, about herbicide spray drift, and various other exotic theories. Another factor is that this occurs only in male plants. Never has there been a crested female cone. That in itself raises all sorts of issues. Is the whole process some sort of sex-related genetic thing? 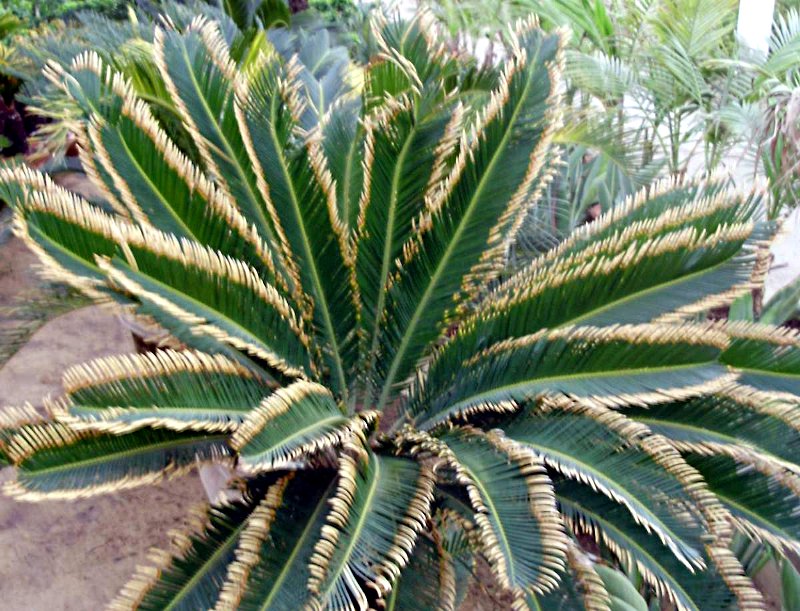 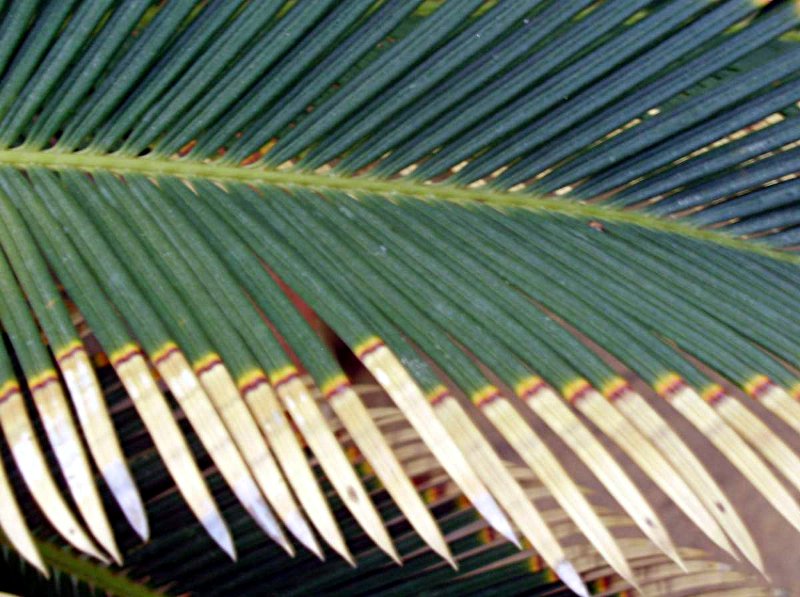 If choosing this option, it would probably be best to remove the fronds just before the new fronds normally tend to emerge. The dieback of the golden yellow tips is a gradual process that occurs naturally.