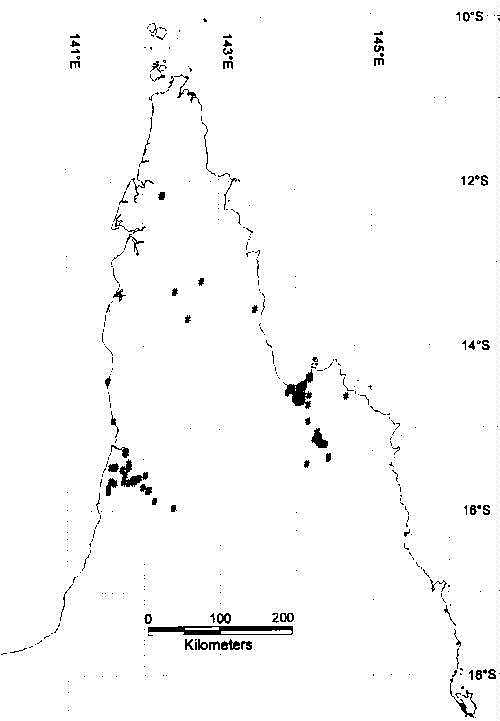 Corypha utan Lam. is undoubtedly one of the most imposing species in the Australian palm flora (Fig. 4) with its massive pachycaul trunks and hapaxanthic flowering and fruiting extravaganza (Fig. 6). In Australia this plant grows along watercourses, floodplains and grasslands, or sometimes amongst encroaching closed forest.

Corypha utan (as C. elata Roxb.) was first recorded for the Australian flora by Ewart et al.(1912) based on a specimen collected by J.O. Rully from the Gilbert River on the western side of Cape York Peninsula. As presently circumscribed C. utan is considered to occur in the Northern Territory and Cape York Peninsula, Queensland in Australia, as well as in New Guinea and other parts of Malesia through to India and Burma (Jones 1995).

The distribution of Corypha in the Northern Territory is well documented with at least five recorded localities (Brock 1988; White 1988), all from the north-eastern part of Arnhem Land. At Milingimbi it was noted in 1972 that the flesh of the fruit was eaten and the leaves used for shelter (Brock 1988), although Wightman & Smith (1989) listed only the use of the fruit for marbles.

Only Tucker (1988) provides a distribution map and this does not indicate specific localities, although he did list the species as occurring in his Cape York Peninsula divisions of Western Plains, North Central Plains, Weipa area, Bamaga area, Cape Melville Dunefields and Lakefield area. If Corypha utan exists in all of the Cape York Peninsula divisions listed by Tucker, then his map is inaccurate as the Bamaga area is not shaded to indicate its occurrence. 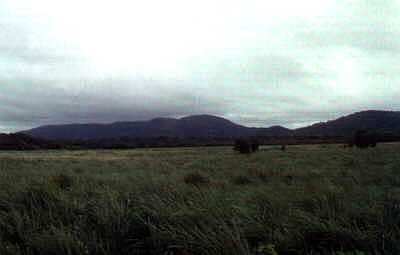 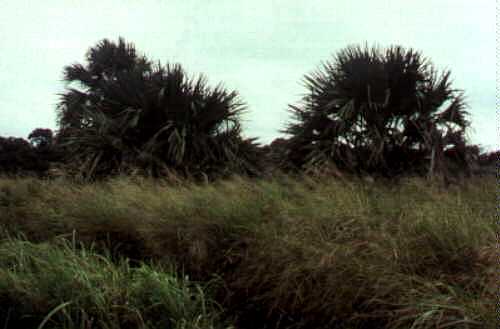 Fig. 3. Approach to the Corypha palms is through dense grass.

Corypha utan is widespread on Cape York Peninsula and has been recorded from at least 96 localities (Fig. 1). Despite this, there are few specimens preserved in herbaria. As of January 1996 there was a grand total of eight different collections of this palm deposited at the Queensland Herbarium (BRI) and the Australian National Herbarium, Atherton (QRS). These specimens are from

Most of these specimens (apart from the last) are from the southern part of the putative range on Cape York Peninsula south of latitude 15S. Queensland palms are as a whole poorly represented in herbaria and the recent census of the Queensland flora listed 484 specimens collected in Queensland for 50 species, with some species having few (less than five) or no herbarium samples (Henderson 1994). The paucity of herbarium specimens for Corypha utan is understandable as the palm is flrstly easily recognised (thus negating the need to collect for identification), and secondly the collection of good representative material is daunting to say the least because of the bulk, height and unpleasant spininess of the species. Brass (1953) noted "Of special botanical interest was a stand of great fan-leaved "cabbage palms", Corypha elata, on a dry creek about a mile south of the Kennedy River. About 60 or 70 feet tall and with massive trunks, they grew on yellowish, sun-baked, clayey soil in a strip of open, monsoon-type of vegetation characterized by deciduous Terminalia trees.

The habitat photographs are of a population of Corypha at the Nesbit River floodplain on 'Silver Plains' station (Figs. 2-6). This is a small population with no more than 100 plants seen. The plants grow in dense, tall grassland infested with wild cattle, feral pigs and large snakes that use the palm clusters for shelter and resent disturbance. The floodplain is relatively dry during the dry season, but would be a boggy and unpassable morass during the wet season. Corypha is the only palm that grows in this particular habitat, although the nearby forests at the mouth of the Nesbit harbour populations of Livistona benthamii and L. muelleri.

Further herbarium documentation of the distribution of Corypha on Cape York Peninsula would be appreciated, particularly with respect to the putative occurrences near Weipa and on the Dulhunty River (Tucker 1988). While preparation of good herbarium material of this palm is difficult, a piece of pressed and folded frond together with some photographs would be sufficient to document further localities. Potential collectors should contact the Queensland Herbarium for further advice on specimen preparation. on Cape York Peninsula, Queensland (based on vegetation 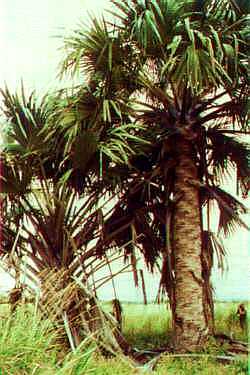 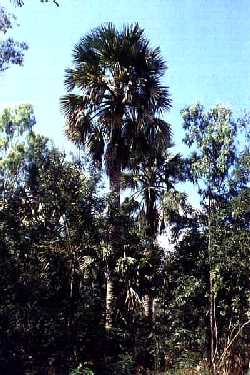 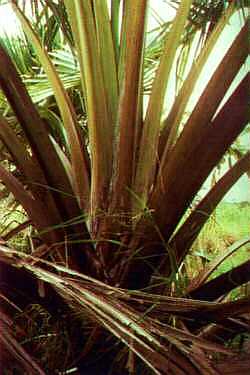 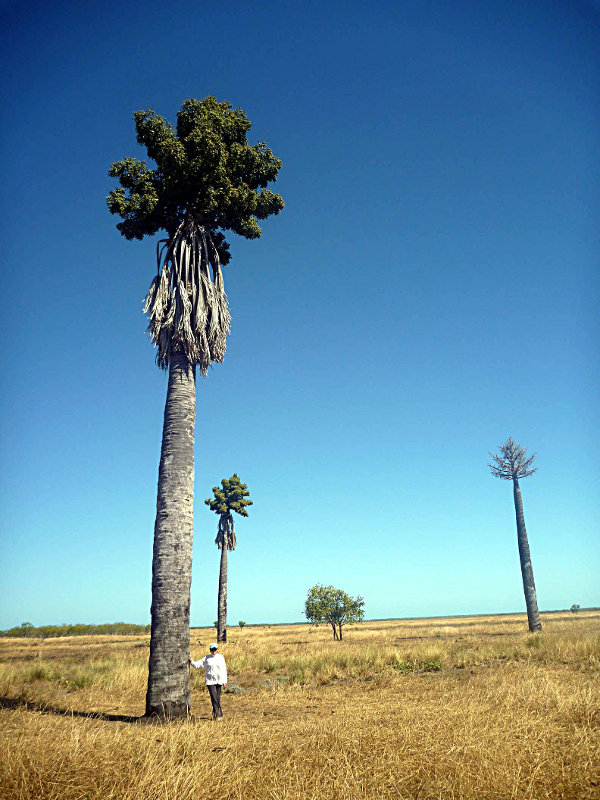 P.D. Bostock for comments on a draft of this note and preparation of the map.
J.R. Clarkson for supplying the site observation data used in the map. B.P.M. Hyland and staff for access to collections at QRS.