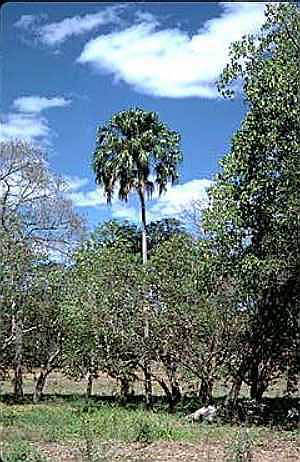 This species, a monsoon forest species with occasional remnants or open plain country is represented in the herbarium by two specimens, one from Howard River and one from Elcho Island. Stocker notes that the wet/dry forest representation of L. benthamii and L. humilis is similar to that of other genera such as Terminalia which is represented by T. sericocarpa in the monsoon forest (wet forest) and T. ferdanandiana in the open eucalypt forest (dry forest). He does not however record L. benthamii on Melville Island.

One of the six Livistonas occurring in the N.T., this is the only one occupying swampy sites in large numbers. Deeply cut, glossy, dark green palmate leaves, and petiole stubs adhering to the trunk distinguish this species.

Very small round black seed are rubbed clean and put into shallow trays. Germination is good, and two or three months later little strap leaves appear. Standard horticultural practice will give a 200mm pot plant with many deeply cut leaves, ready for a shady spot in the garden. Good air circulation in the growing area is necessary to prevent fungus attack. Benthams grow fairly quickly given plenty of-water and fertilizer.

Planted in a semi-shaded position, this fan palm does extremely well in Darwin. In full sun the petioles shorten and older leaves scorch, but a reasonable specimen is produced. Readily available in most N.T. nurseries, Benthams palm is gradually gaining acceptance with local gardeners. It makes a very attractive patio specimen when grown in a large tub. Like most Livistonas, it will not transplant very well