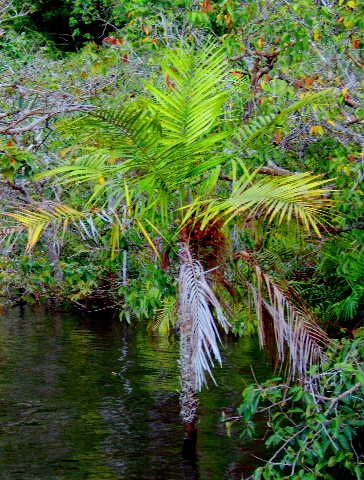 Rio Negro means black river. It is a mighty river even before it merges with Rio Solimores near Manaus and becomes the Amazon River. Most of the area that the Rio Negro drains is devoid of soil and the lush vegetation grows entirely on decayed plant matter. Minute particles of this compost is what gives the water its black and inky colour.

For hundreds of kilometres up river, the Rio Negro has more the appearance of a huge lake than a river. There is no apparent flowing of the water; the shore resembles a beach at low tide and the other side of the river disappears well beyond the curvature of the earth.

The steep embankment is lined with rampant vegetation and many species of Astrocaryum, Bactris and Euterpe can be found. At the waters edge the prominent species are Mauritia flexuosa and Leopoldinia pulchra.

The shores of the Rio Negro change with the seasons when, during the drier part of the year, the sandy beach may extend for hundreds of metres in some places: and it is in this area that L. pulchra grows. During the wet season, which can last for about three months, the beach in places completely disappears and the water hugs the embankment. The palms just go under water for this period with some of the younger ones entirely submerged. The mature 3 - 5 metre tall palms may just have their crown sticking out of the water.