When Mathew Flinders set off in 1801 from England in the Investigator to map the coast of New Holland, Sir Joseph Banks arranged for him to be accompanied by two scientific gentlemen. One was the Scottish medical practitioner and botanist Robert Brown, who later gave his name to the constant erratic movements of small particles in fluid as seen under a microscope - Brownian Movement and later discovered that cells have nuclei. The other was Ferdinand Bauer, a young Austrian artist who, (with his brother Franz, botanical artist at Kew Gardens), had already made a name as a scientific illustrator.

When he was 15 years old, Ferdinand and his two older brothers, having lost their father as infants, were employed by the prior of their home-town monastery in Feldsperg, Austria. The prior set the boys recording, in miniature, the fine collection of plants in the monastery garden. Five years later Franz and Ferdinand Bauer moved to Vienna, to work in the University Botanic Garden. Next, Professor Sibthorpe, Professor of Botany at Oxford University. engaged Ferdinand Bauer as Natural History Painter on a field trip to Greece. When Sibthorpe returned to England in 1787 Bauer went with him to prepare his more than 1,500 drawings for publication. These were eventually published in the Flora Graeca, considered by some experts to be the most beautiful botanical work ever produced. 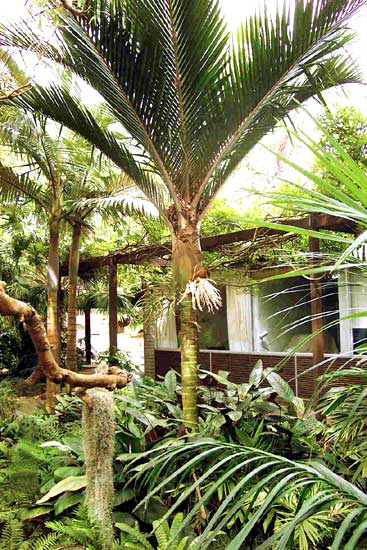 During their two years with Flinders, Bauer and Brown completed the first circumnavigation of New Holland - or Australia, as it was later called, at the suggestion of Flinders. By then Bauer was able to report to Banks that he had already made drawings of 1,000 plants and 200 animals from Australia and Norfolk Island. H.M. Sloop Investigator had been refitted according to Banks' specifications and equipped for their work, and they had on board a collection of Australian specimens, a greenhouse, a microscope and a huge library of books on South Sea voyages.

The number code that Bauer used on sketches so that they could later be worked up as finished studies is astonishing in its precision. Numbers from one to 999 on his preliminary drawings were translated into gradations of colour so fine that recapturing each shade would seem more a job for a computer than a man. Only rarely are there mistakes in his colouring. In those days before photography, accuracy was of crucial importance: it might take weeks or months to transport delicate specimens back to Europe, with all the attendant problems of decomposition. Brilliant colours soon faded on dead fish or plants, leaving the artist's work as the only record. But Bauer had been well trained. Unlike the earnest amateurs associated with the First Fleet, whose pictures of Australian plants and animals look so odd, Bauers pictures are models of scientific exactness.

Bauer has been called "the supreme botanical draughtsman, the Leonardo of natural history painting". An art critic has commented that the delicacy of Bauer's technique, combined with a complete absence of sentiment, lends his works a timeless objectivity. They are beautiful because the things Bauer depicts are beautiful; but impressive because of the skill required to hide so many traces of the artist's hand and personality.

Flinders named Cape Bauer, a very small cape in South Australia, after his botanical artist. The name of Bauer, (often honouring both Ferdinand and Franz), is commemorated by the genus Bauera, (a small shrub from Victoria and Tasmania), Grevillea baueri and Eucalyptus baueriana. And of course by the palm Rhopalostylis_baueri.

In 1998 there was an exhibition of Ferdinand Bauers illustrations, at the Museum of Sydney (on the site of First Government House, cnr Phillip & Bridge Streets). The colours, after almost 200 years, were amazingly well preserved. Included was Bauers preliminary sketch of a Blue Swimmer crab, with the numbers representing colours pencilled in, and nearby the finished paintings of this colourful creature, completed later, perhaps in the comfort of Banks's library in Soho Square. Apart from fish, frogs, lizards, parrots and furry animals there are many plant illustrations, including two of Cycas_media. A painting of Livistona_humilis, which they found in the Gulf of Carpentaria, illustrates the lectotype from which Robert Brown was to describe the genus, and which for some reason he named after a long demised Laird of Livingston in Scotland. From Bauers eight month stay on Norfolk Island there were three pencil sketches of the landscape, with many Norfolk Island Pines and many tree ferns, but, alas, none of Rhopalostylis_baueri.