Difference between revisions of "Category:Cycads" 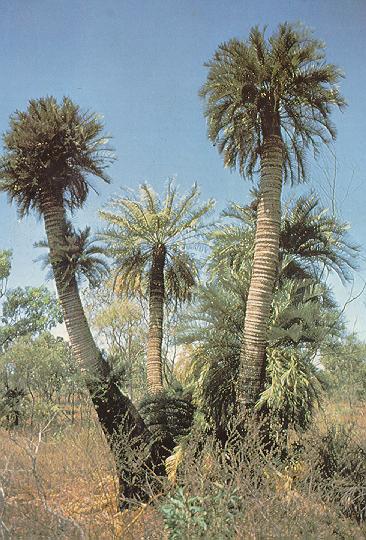 The cycads are a small group of plants with many unique features, an ancient origin and a very long history. Cycads are known to have lived in the Permian era, over 200 million years ago - even before the dinosaurs roamed the earth. Although once abundant across the globe, the cycads are now greatly reduced in both numbers and distribution. There are now about 250 species in 11 genera, compared to possibly 300,000 species of flowering plants, the group that now dominates the world vegetation. All cycads are tropical or subtropical and each genus has a restricted geographical range.

The very large divided leaves means that cycad plants resemble palms or tree-ferns in overall appearance. Cycads, however, differ greatly in almost all aspects of detailed structure and reproductive behaviour. Cycad plants are dioecious (i.e. male and female reproductive structures are borne on separate plants), and reproduction is by seeds, which are produced on open carpophylls or seed-bearing leaves. Although technically woody plants, unlike other woody plants, cycads possess a pachycaul stem. This is a thick, soft stem or trunk made up of mostly storage tissue with very little true wood. Within the trunk, leaf traces or veins leading to leaves arise at a point opposite the attachment of the leaf, and circle the trunk within the storage tissue. These are known as with girdling leaf traces, and occur in some ferns but no other seed plants. The coralloid roots of cycads are also characteristics not seen in other seed plants, and the cycads lack the axillary buds seen in other seed plants.

The living cycads (division Cycadophyta) include about 250 species, with 11 genera in 3 families. The cycads have been classified as "gymnosperms" in the past, although recent studies have shown that this is not a natural group, some members being closer to the flowering plants than to other "gymnosperms". The "gymnosperms" are all ancient seed plants, many now extinct, but with four major groups living today. These are the cycads (Cycadophyta), the Welwitschia group (Gnetophyta), the conifers (Pinophyta) and Ginkgo, the Maiden Hair Tree (Ginkgophyta). They are now regarded as quite separate and distinct classes of equivalent status to the flowering plants (Angiosperms or Magnoliophyta). Although the four groups of "gymnosperms" are very different from one another in appearance they all produce naked ovules in contrast to the flowering plants in which the ovules are enclosed in an ovary.

This category has the following 12 subcategories, out of 12 total.