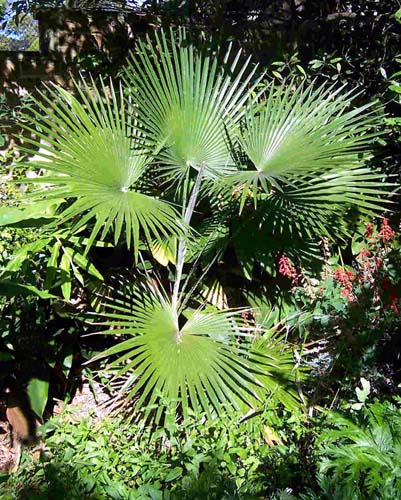 Martius is regarded as the father of modern botany. Born in Bavaria, he studied medicine, but turned to botany. The King of Bavaria , Maximilian Joseph who had visited Brazil, organized a natural history expedition to that country, with Martius as botanist and von Spix as zoologist. They set out in 1817 and explored Amazonia, the richest palm region of the world, collecting and sketching. It was an immense trip, covering almost 1,400 miles, from the Tropic of Capricorn to the Equator. They travelled the Amazon from its mouth to the border of Peru, as well as its tributaries, the Rio Negro and the Rio Madiera. At the end of 1820 Spix and Martius returned after experiencing enormous privations on their four-year expedition. Martius had been seriously ill and Spix contracted Schistosomiasis, from which he eventually died. They brought back specimens of 85 species of mammals, 350 of birds, 130 amphibians, 116 fish and 2,700 insects as well as 6,500 botanical items. Martius was able to present Munich Herbarium with the plant species, as well as enriching the Botanic Garden with Brazilian plants and seeds.

The King awarded both scientists a knighthood and a pension for life, but Spix was in extremely poor health. Together they wrote a report of their expedition, Reise in Brasilien (Journey in Brazil) which was published in three volumes in 1823, 1828 and 1831, the last two being prepared and published by von Martius as von Spix had died in 1826 aged 46.

In 1826, Martius was appointed Professor at the University of Munich, and in 1832 he became conservator of Bavarias royal botanical garden. He was the first to observe that the leaves on a plant stem form distinct arrangements (phyllotaxis), following fixed geometric rules.

From 1823 to 1850 Martius published Historia Naturalis Palmarum in three immense volumes. He set the outlines of the modern classification of palms and prepared the first maps of palm geography. He described the palms of Brazil in the second volume and, in the third, those of the rest of the world, as far as he was able to draw on the researches of others. Historia Naturalis Palmarum was reprinted in two volumes in 1971, for US$137.50. Unfortunately for most of us, the text is in Latin.

He retired in 1854 to concentrate on his greatest undertaking, Flora Brasiliensis, which was finally completed - in 40 volumes - by others, sixty years after publication of the first part.

Many species of plants and animals were named for him, and even a mountain, Mount Martius in New Zealand and the von Martius Waterfall in Brazil. Palms named for Martius include Asterogyne martiana, Pritchardia martii and Trachycarpus martianus. He was said to have been so enamoured of palms that he admired them like a tourist, sketched them like a landscape painter and studied them like a botanist. He wrote (in Latin) that "in palms I am ever youthful, in palms I am revived" and his tombstone was adorned with two palm fronds and a similar phrase in Latin: "In palmis semper virens resurgo!".