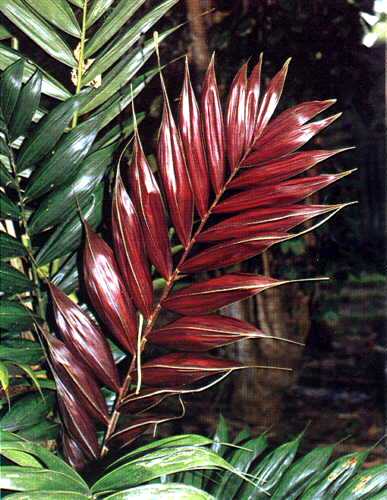 Calyptrocalyx polyphyllus Becc. owes its discovery to an early European explorer of the island of New Guinea. A Swiss expeditionary, Karl Lederman mapped the Sepik River (then known as Kaiser fluss) in Eastern New Guinea (now known as the nation, Papua New Guinea) and its many tributaries. Whilst surveying one such river, which was later named April River (to commemorate the month of this particular expedition in 1912-13 ) he traversed a section of the Hunstein Mountain Range, and presumably came across this palm species and added it to his botanical collections. All of his plant specimens were sent back to Europe where Odoardo Beecari was instrumental in eventually describing this particular palm species as being "polyphyllus" which in Latin means many leaved, and indeed on first impression it is certainly an accurate summation of this palm. 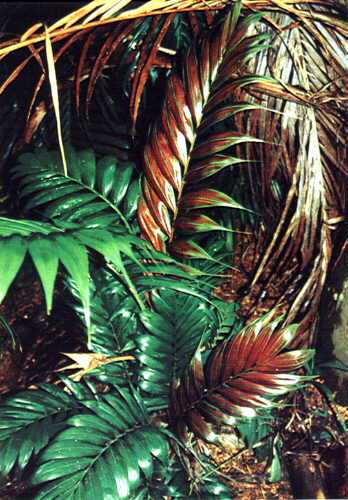 Many local palm collectors have their specimens still and it is largely through their growing accounts, that so much is known about its nature in cultivation. Already specimens from Glen Idle Nursery are producing viable fruit. (M. Daish- pers comm) in various enthusiasts's collection: At the Flecker Botanic Gardens in Cairn: we have 3 specimens, 2 are approaching maturity of which one has commenced flowering for the first time. Growing records are not well known outside of Australia, although it has been alleged to be in cultivation in U.S.A., but proof has not been forthcoming yet. Seedlings that have been raised in U.S.A. from recent shipments over the last 2 years, appear to be doing well. (C. York- pers. comm.) Plants growing in the southern parts of Australia are able to grow fine, but cannot tolerate frost, and demand protection over winter, generally a drop in temperature has not been found to be detrimental once plants are established in the ground. Temperatures as low as 10 degrees have been recorded in this instance! Presumably under protection in a heated nursery or shadehouse situation, temperature can be regulated anyway. Already this palm species is being trialled in large quantity as a potential indoor or patio palm for the tropics, however the results are not yet available. This year should see the first large-scale, commercial debut of this species in north Queensland at least. (M. Spina- pers. comm.) To my mind Calyptrocalyx polyphyllus will become a paragon by which all other New Guinea Calyptrocalyx species will be measured, and from the other 15 or so species I've seen and recorded, it will definitely be a hard act to follow. Of course there maybe one or two species worth mentioning, but that is unfortunately for now, another story.