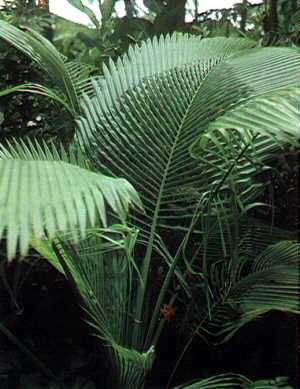 Beccariophoenix madagascariensis Jum. & H. Perrier is a massive unarmed robust, solitary, pleonanthic, monoecious, tree palm. Stem erect. Leaves massive, pinnate, marcescent, sheath tubular at first, with a large, lateral obtuse lobe on each side, disintegrating into a mass of grey fibres. Leaflets single-fold very numerous, regularly arranged, more slender and crowded at the base of the rachis than distally. (Uhl & Dransfield, 1987) When small B. madagascariensis leaf has a window, very similar to Reinhardtia gracilis. Leaf opens before the petiole is fully extended, similar to Kerriodoxa elegans.

Dransfield (1988) writes, inter alia, that the species was first described in 1915 by Jumelle and Perrier de la Bathie and, in the first description of the palm, the authors commented that it was extremely rare and on the verge of extinction. Of the first collection very little herbarium material exists and there is a meagre specimen in the herbarium at Paris and a duplicate of it in the herbarium at Florence in Italy that Pertier had sent to Beccari. The original description is quite detailed, and some sort of picture can be built up of how the palm looks from the notes on the habit. Pertier described how the constant harvesting of young leaves for the manufacture of hats was responsible for the decimation of the palm (Dransfield, 1988). 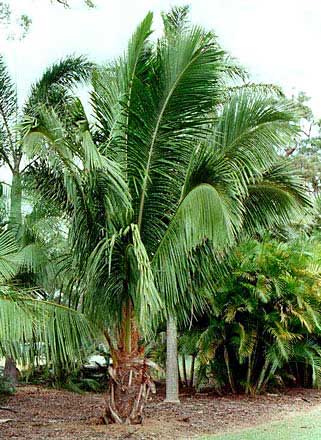 B. madagascariensis grows in in the eastern section only of the Analamazoatra district of Madagascar at heights of 900-1000 metres as a canopy emergent in tropical rainforest. It grows in semi-shade, likes rich well-drained soil with lots of humus (Dransfield, 1988). One of Dransfield's ( 1988) photos shows Beccariophoenix towering above the forest like giant feather dusters. On his February/March 1994 visit to Townsville John Dransfield showed this very photo/slide and commented that "...some of these palms had been felled by an unscrupulous seed merchant". I have grown Beccariophoenix from seed and have an excellent specimen in my yard growing under these very conditions. While very slow from seed, B. madagascariensis, once established, grows reasonably fast with about five new leaves per year.